ToolGuyd > Hand Tools > Electrical Tools > Tested: Klein’s new Rugged and Waterproof Multimeter
If you buy something through our links, ToolGuyd might earn an affiliate commission. 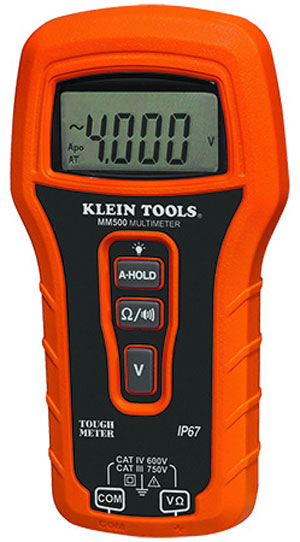 I received a test sample of Klein’s new MM500 multimeter and began putting it through the ringer this morning. Not literally of course, although this meter could probably handle it.

The main point about this meter is that it is waterproof, dustproof, and incredibly rugged. Its functions are limited to voltage, resistance, and continuity testing, but that’s enough for many users out in the field.

A full review of the meter will take some time, but I wanted to share some early feelings while they’re fresh in my mind.

Compact Housing – The meter is only slightly larger than my smartphone, and while nowhere as svelte, it’s thinner than most other compact meters I’ve used.

Thoughtful Design – I haven’t made up my mind about the built-in lead storage in the back of the meter, but it’s a nice touch. The battery compartment screws can be opened with a Phillips #2 driver, which makes field-replacement quick and easy. As promised, the screws are captive and don’t fall out.

Meter-Slapping Battery Removal – The batteries are seated very deep into the meter, but there are no pull-tabs to aid in battery removal. Rather than figure this out down the road – or consult with the user’s manual – I slapping the meter against my hand. It took a few stinging slaps before I realized I could hit the meter against other surfaces. After all, it is impact rated. I gave the meter a good short slap against the table and the batteries popped right out.

Made in Korea – While not made in the USA like some of Klein’s other recent meters, I am quite pleased to find that the MM500 meter is made in Korea.

A year ago, when I thought multimeter, Fluke and Extech were the brands that instantly popped into my mind. Now, thanks to this and Klein’s other new meters, I will probably start thinking Fluke, Extech, Klein. Not necessarily in that order, but all together.

My first impression is that this is a well thought out and well built meter. I am definitely impressed thus far.

Now, if you excuse me, I need to find a flight of concrete steps to bounce the meter down.