ToolGuyd > Hand Tools > Electrical Tools > Klein Sent us a Video-Playing Press Kit to Promote Their New Heavy Duty Wire Strippers
If you buy something through our links, ToolGuyd might earn an affiliate commission. 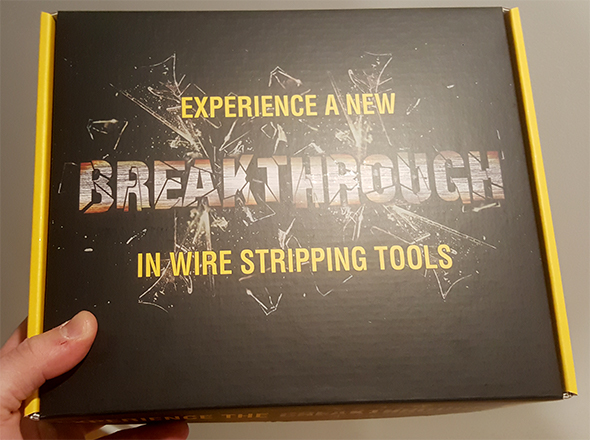 Every now and then I receive a physical press kit, usually a fact sheet or printed press release, maybe a thumb drive, and they almost always include a tool sample.

A press kit draws extra attention to a new tool release. Think about it – what would grab your attention more, something physical that surprises you in the mail, or an emailed press release that competes with many others for your time?

One time there was a small CNC-carved wooden box that held a couple of brand fact sheets and a product lineup catalog. Another time, something made from heavy duty tape (a belt?). Sometimes a press kit will include some test materials, for testing a tool in a suggested manner or scenario. A few months ago, I received a press kit box that had mating pieces of extension cord as the handle.

Klein recently sent over a press kit for their new heavy duty pliers, and it was pretty cool.

I’ve read about some pretty crazy press kits in other industries, such as video games. Klein’s kit doesn’t set the bar at a whole new level in that kind of way, but it was very nicely done. I felt it to be a very good presentation.

It might sound weird, but I tend to notice presentations. For instance, in addition to oohing and ahhing over new tools at a media event, I’ll take notice of the physical presentations – the graphics, the demos, the posters, the multi-layer printed-to-foam-core-board display boards… whatever is on display. 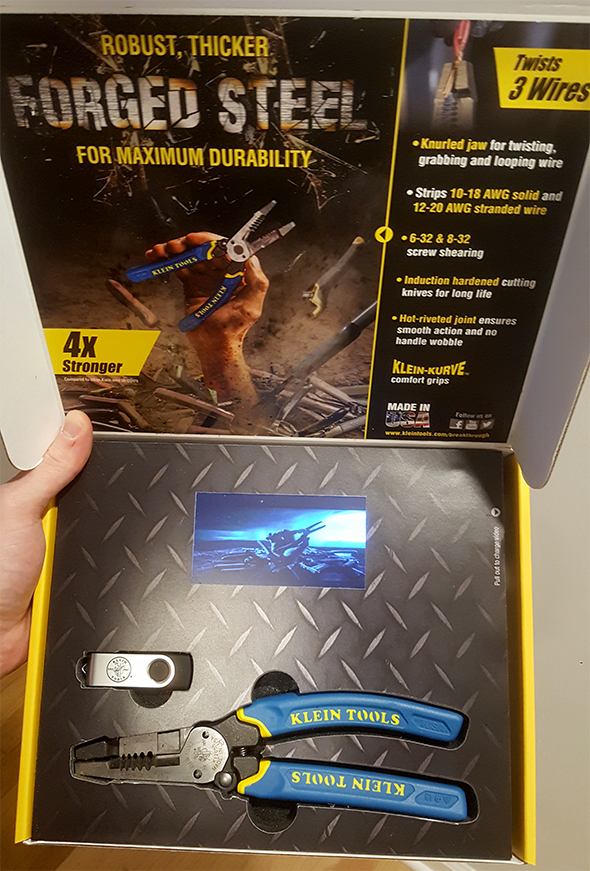 Klein sent over a press kit to promote their new heavy duty wire strippers. Open the box, and there’s a test sample of the new wire strippers (my first impression is that they’re pretty awesome), a flash drive, and an LCD display that plays the promo video!

You might think “so what, it plays a video,” but it brings a smile to my face. I’ll eventually take it apart to see how it works, and to see if I can repurpose any of the parts.

And the wire strippers? They feel pretty darned solid. I’ve only done a few strips with them, but they seem like good heavy duty wire strippers that can also double as pliers for gripping, grabbing, and twisting tasks.

I wasn’t sure if or how I could talk about the press kit, but I thought it was fun and wanted to share.

Part of the fun is how the video in the box looks and sounds. You have to view it directly or the colors skew, and the sound is an assault on my senses. I mean this in the nicest way. It’s not like they could or should have had smartphone or tablet quality. And whatever they did use might be reusable in a personal project.

The video is a little over the top, and the first 2 times I watched it from the press kit box, I thought there was something wrong. Why is it shaking?!! Oh, that’s the video.

So the video itself is a little cheesy, and that just makes everything more fun. I wouldn’t have had the same response if it was drably done.

Now, if you excuse me, I have to watch the video one more time before finding some hardened wires to cut.

I LOVE press kits! I hadn’t received one like this before, and that’s part of what made it special.

There’s a charging cable, for recharging a battery via USB, but after a few more plays I’ll dissect everything to see if the electronics can be salvaged. I’m hoping yes!