ToolGuyd > Hand Tools > EDC, Pocket, & Multitools > New Klein Tools Pocket Screwdrivers Have 2 Surprises
If you buy something through our links, ToolGuyd might earn an affiliate commission. 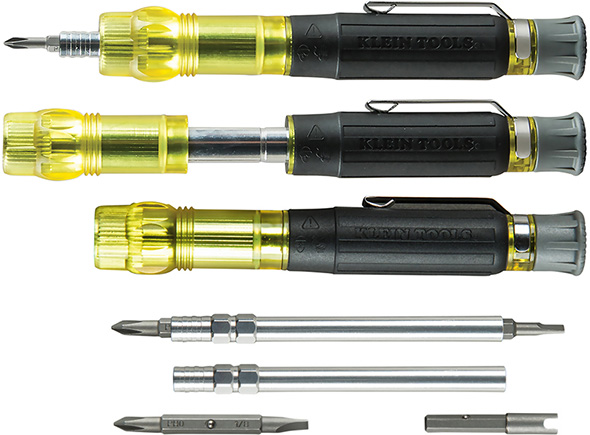 Klein Tools has come out with two new Pocket Screwdrivers, designed for electronic and HVAC applications.

More Klein 4-in-1 precision screwdrivers? Don’t they already make one?

Klein 32614 is a 4-in-1 electronics screwdriver, while 32613 is the 3-in-1 HVAC  Pocket Screwdriver. Both tools have common features, including a concealable tip, which allows for more convenient storage, and a rotating end cap, commonly found on precision screwdrivers.

If you don’t care much about the new Klein screwdrivers’ pocketability, they also have a more traditionally-styled 4-in-1 precision screwdriver at a lower price point.

Compare(Klein 4-in-1 Precision Screwdriver via Amazon)

Neat! I like the look of the sliding tip guard, which should help protect my pocket and leg from being poked by the screwdriver bit tips. There are other ways to do this, such as internal bit storage and with removable covers, but Klein’s design looks simply yet elegant.

The screwdriver looks a little short, doesn’t it?

But… the removable barrel has a “short” side, and a “long” side. Aha! Meaning, you get a compact screwdriver with the barrel inserted into the screwdriver in one direction, and a stubby screwdriver if it’s reversed and inserted in the other direction.

You’d have to swap bits back and forth, but that’s quick and easy enough to do once the shaft is removed from the screwdriver handle.

So, it’s a Pocket Screwdriver, or a longer-shafted screwdriver, your choice.

I though the concealable tip was a great-looking feature, and it’s one you can tell from the product images. But two-length bit holder shaft? That one surprised me. Kudos to Klein Tools for thinking outside the box.