ToolGuyd > Hand Tools > Electrical Tools > Knipex Upgrades Their Diagonal Cutters with a New Pivot and Longer Cutting Edges
If you buy something through our links, ToolGuyd might earn an affiliate commission.

Knipex has upgraded all (or many) of their diagonal cutters with a new higher leverage pivot that it said to provide 20% higher cutting force than previous models.

Not only that, the cutting edges are longer.

Knipex says that the high cutting force is due to optimum cutting geometry and [power] transmission ratio.

This actually comes to me as a surprise. Why now? Still, it’s good to see Knipex striving for improvements, even in what might be considered their most popular tools.

A fact sheet I found mentions a novel hinge design, although I can’t see much innovation in the hinge aside from a closer pivot joint.

The longer cutting edges don’t seem to contribute to the increases power – this feature is more intended to make it easier to work in tight spaces, such as power distribution boxes.

There’s no word as to how much they’ll cost compared to previous models, and the model numbers remain the same. You’ll probably want to wait until the older versions sell out, or try to buy them in person to ensure you get the newer model. 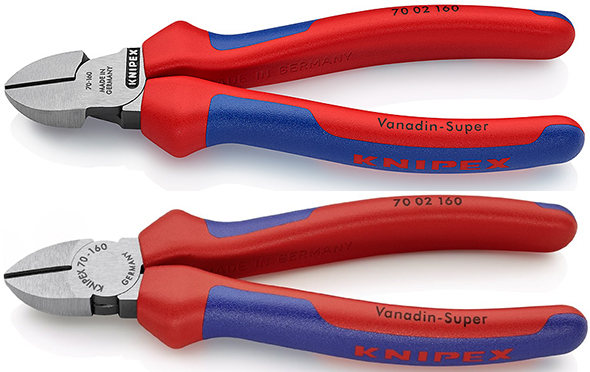 In this image, the newer model is at the top, older model at the bottom. This is the 70 02 160 comfort grip diagonal cutters.

Comparing the two photos shows that there IS a tiny increase in cutter length. It’s not a huge amount, but perhaps enough to make a difference in use.

I wish I could provide insight into where you can buy these new upgraded diagonal cutters, but when brands reuse model numbers, all you can do is wait until older versions sell out. If shopping in stores, look at the writing on the pivot. The new version has straight lettering, the older version has lettering that curves around the pivot.

Do you know of any way to make sure you’ll get the newest version when buying from online vendors?