ToolGuyd > Hand Tools > Mechanics' Tools > Kobalt 3-in-1 Ratchet
If you buy something through our links, ToolGuyd might earn an affiliate commission. 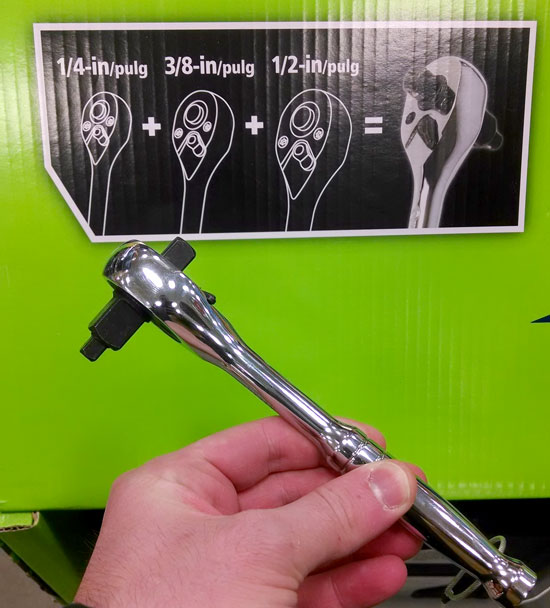 While browsing around the Kobalt tools holiday display at a local Lowes, I came across a new 64pc mechanics tool set. The set comes with a screwdriver-handled driver, an assortment of 1/4″, 3/8″, and 1/2″ drive sockets, screwdriver bits, a bit socket adapter, 3 extensions, and a single 3-in-1 ratchet.

I can understand how an all-in-one ratchet might seem convenient for some users, but I can’t say I find this ratchet to be appealing.

First, this is among the shortest 1/2″ ratchets I have ever seen. It’s not quite a stubby ratchet, but it looks quite short, probably to avoid situations where you could potentially over-torque a fastener with a 1/4″ socket. There is a good chance you will run into insufficient leverage and torque issues when working on larger fasteners.

Second, this ratchet is anything but low-profile.

Thirdly, many people use 3/8″ sockets and accessories more than the other two sizes. With this tool, using the 3/8″ drive end puts the direction selector switch would be on the underside of the ratchet. That could make it difficult to toggle during use.

Multi-Size dual-head ratchets are already on the market, but this is the first time I have seen a 3-in-1 combination like this. With the 64pc tool set, the socket sizes go up to 1″ and 24mm, which is a little beyond 3/8″ drive territory, which explains the need to include a 1/2″ drive tool.

But wouldn’t a 3/8″ to 1/2″ adapter have sufficed? If I could have only one ratchet to use on three drive sizes, I would rather it be a 3/8″ ratchet with step-down and step-up adapters.

But, in case all-in-one convenience is your thing, the Kobalt 64pc mechanics tool set that comes with the 3-in-1 ratchet is priced at $40 at Lowes.