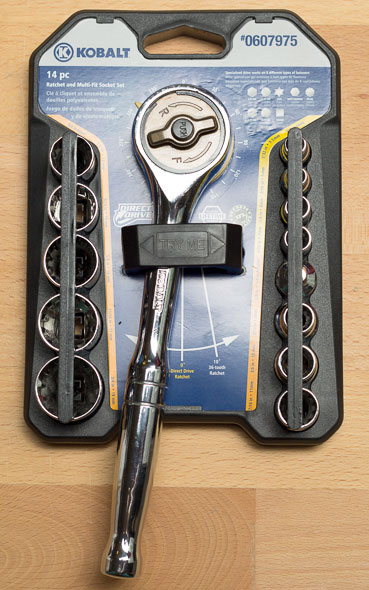 On the packaging, Kobalt boasts that the new Direct Drive ratchet can work with a swing arc as small as 0°, while common consumer-grade 36-tooth ratchets require 10° of swing to be of any use.

The Kobalt Direct Drive gearless ratchet is indeed stepless and can be used with as small of a swing arc as I could manage. Once the ratchets hit stores, the “try me” feature on the packaging will surely convince a lot of tool uses and gift-givers to take one home.

I wouldn’t technically call this a 0° ratchet, but the minimal swing is immeasurably small and even less than 1°.

Update: The 14pc set and 15pc Kobalt gearless ratchet sets will likely become available for purchase some time in November. I reviewed the 14pc set here, and the 15pc comes with a bonus palm ratchet.

The 3/8″ Kobalt Direct Drive ratchet is actually quite nice. I don’t think I have used a gearless ratchet before, but I’m familiar with how they work. I’m almost sure I do have a gearless ratcheting screwdriver around here somewhere.

The main selling point is that there’s no catch and drag as with traditional ratchet designs. With its gearless design, the ratchet can engage and turn sockets with remarkably little handle movement. 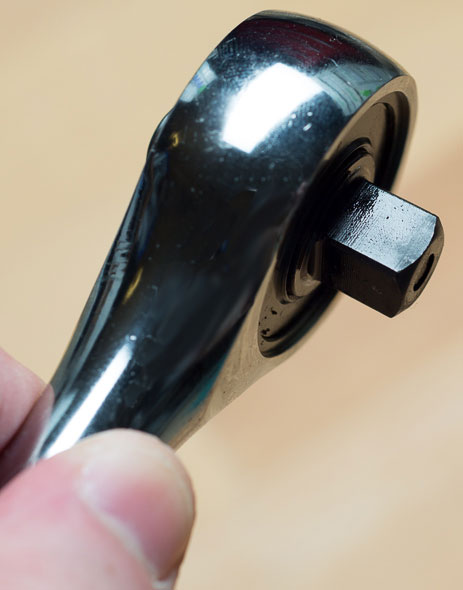 If you’re thinking that the ratchet head looks a little large at first glance, that’s okay, I thought that at first too. But it’s actually not that bulky.

This image might look a little funny, as I edited out some weird reflections that I just could not avoid capturing in the photo.

I was actually pleasantly surprised that the ratchet was quite comfortable to hold and use. I wish it was a little bit longer, but it’s no shorter than my standard Proto, Gearwrench, and Craftsman 3/8″ ratchets.

I was also surprised at how smooth the ratcheting mechanism is. There’s no grinding, no scraping, and no clicking. The Direct Drive ratchet operates very smoothly, which is something that you don’t often get with inexpensive ratchets right off the shelf.

When swinging the gearless ratchet in the opposite direction of torque application, the absence of hearing the ratcheting mechanism go click click click is actually a little spooky. Instead of hearing and feeling the ratchet click in steps as the gearing slips tooth by tooth over the pawl, what you’ll feel is very slight continuous drag. 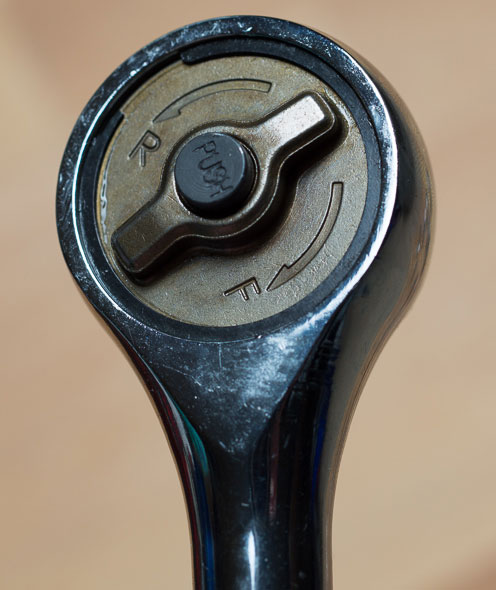 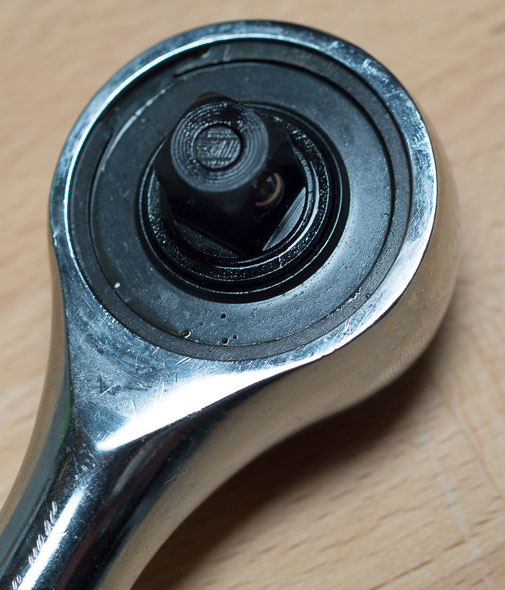 There’s nothing special going on with the drive end of the ratchet, but I figured it wouldn’t hurt to show you just one more photo.

We’ve seen photos of the Snap-on FZero gearless ratchet, but I couldn’t think of a good reason why I shouldn’t check out the Kobalt Direct Drive’s internals firsthand. After a bit of use and testing, I disassembled the ratchet. 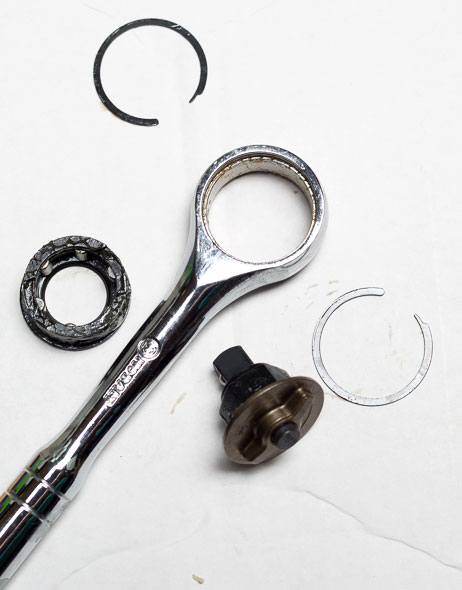 Everything was caked in grease, which is good. That helps to keep the motion nice and smooth. 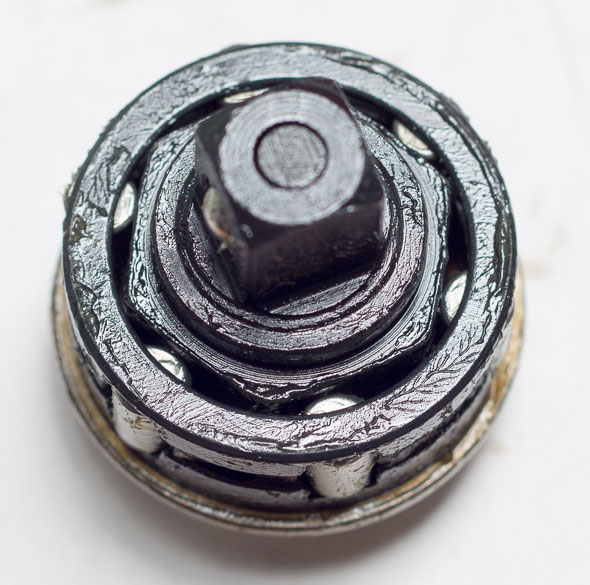 I had hoped to fully discuss how the gearless/roller/roller clutch ratcheting mechanism works, but it’s actually too complex to thoroughly cover here.

In essence, in the free-swinging direction the rollers are not under compressive forces and the handle can rotate freely. When the handle is rotated in the torque-transfer direction, the rollers are squeezed between the ratchet head and drive spindle. The ratchet head-roller-spindle couple together very rigidly, which forces sockets and fasteners to turn with the ratchet handle in the torque-transfer direction, even when higher torque is required.

The 6 rollers contact the hexagonal drive spindle well away from the corners, which makes the ratchet quite strong and resistant to slipping. The rollers are not as large as the 8 rollers found in Snap-on’s gearless ratchet, but they’re not puny either.

As for the reversing mechanism that permits free rotation in one direction and torque transfer in the other – that’s something I cannot explain as concisely. Nor can I show it, as there is no way to further disassemble the drive spindle.

There are a couple of different reversible gearless/roller ratchet designs that go back at least 65 years (here’s a Wright Tools patent), but the most relatable one I could find is Stu Douglass’s, patent US20140060257 A1.

If you’re interested, that patent publication and the supporting artwork might give you a good idea of how the Kobalt ratchet’s reversing mechanism works. There are differences, such as how the Kobalt Direct Drive ratchet has notches at opposite ends that match up with grooves in the top of the roller wheel assembly, and so Douglass’s description and artwork might not perfectly describe the inner workings of this ratchet’s reversing mechanism.

Here are a couple more images of the Direct Drive’s inner workings: 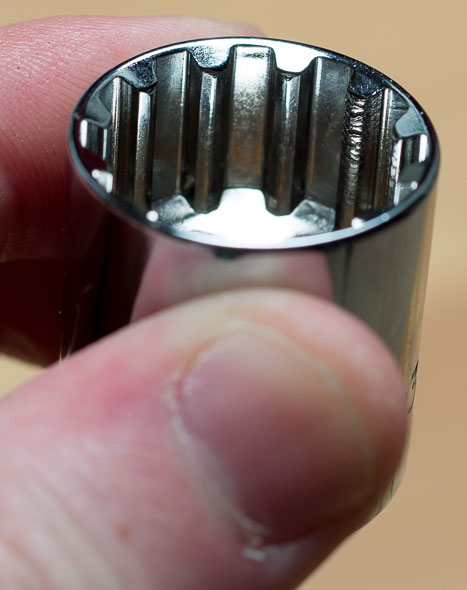 The Kobalt Direct Drive gearless ratchet comes with 12 combination inch and metric sockets and a 3/8″ to 1/4″ adapter. 8 of the sockets are 3/8″ drive, 4 are 1/4″ drive, hence the need for an adapter.

Socket quality is pretty decent, but I did notice one or two with internal defects, such as the rippling you see in the above photo. I’m not really sure what’s going on here.

By now you probably know my feelings towards Multi-Fit, Xtreme Access, and other universal-style sockets. I’m not a very big fan of spline sockets or inch-metric combination socket sizes.

The included Kobalt Multi-Fit sockets fit fastener sizes 3/16″ through 3/4″ and 5mm through 19mm. They can be used on standard 6pt hex fasteners, but also 12pt, star (external Torx), rounded and damaged, spline, and square fasteners.

The socket set doesn’t come with a separate organizer, but you could always keep the retail packaging.

I ended up really liking Kobalt’s new gearless ratchet. It is super smooth, and I appreciate that there’s practically no swing arc. The Direct Drive ratchet can be used in tight spaces too narrow for many other ratchets – even fine-toothed ones – to work.

There is a tradeoff. Due to the ratchet’s roller clutch-style design, the ratchet head is round and a tiny bit bulky. However, I do mean a tiny bit bulky. Compared to my tear drop or pear head ratchets, the Kobalt Direct Drive ratchet is only a little bit wider. It’s maybe 1/8″ wider than my Proto 3/8″ ratchet, and a little more wider than my slimmer Gearwrench and Craftsman ratchets. In my opinion, the size and shape of the ratchet head is definitely overlookable, and more than balanced out by its gearless advantages.

I wish I could test the breaking strength of the ratchet, but sadly I accidentally broke something inside the drive shaft when attempting to disassemble it further. I’ll try to do this if I can get my hands on a timely replacement. Even though I didn’t test the maximum limits of the ratchet, it felt quite strong in initial tests.

To be honest, I couldn’t care less about the Multi-Fit sockets, although DIYers, homeowners, and weekend warriors on a budget might like them. I instead prefer to mainly use traditional 6pt inch and metric sockets. When I get my hands on a replacement ratchet, I’ll toss the sockets into a plastic baggie and then into a loaner or portable tool kit, and the ratchet into my main toolbox.

I’ve used the new Kobalt Direct Drive ratchet enough to confidently give it a thumbs up. There are other gearless ratchets out there, but I’ve avoided them for two reasons – some simply cost too much, and others are only reversible by means of a push-through square drive, which I’m not a big fan of.

The 14-piece Direct Drive ratchet and Multi-Fit socket set will initially be priced at $30, and I’m sure we’ll see a price drop or two as the winter holiday shopping season progresses.

This ratchet is one of the best Kobalt tools I have ever used, and the best part is that it’s innovative without being gimmicky.

If you look back at the top of the page, I gave the Kobalt gearless ratchet a 19/20 rating. I deducted one point for comfort, and that’s because I don’t like giving perfect scores and might have preferred for a longer or cushion-grip handle. Only a few of my ratchets have handle grips, but I think such a feature would have worked well here.

Note: It doesn’t look like these sets are orderable anymore, but you might still be able to find them on the shelf at your local Lowes.

Thank you to Lowes for providing the review sample unconditionally. Review samples are typically given away, donated, or retained for editorial and comparison purposes.