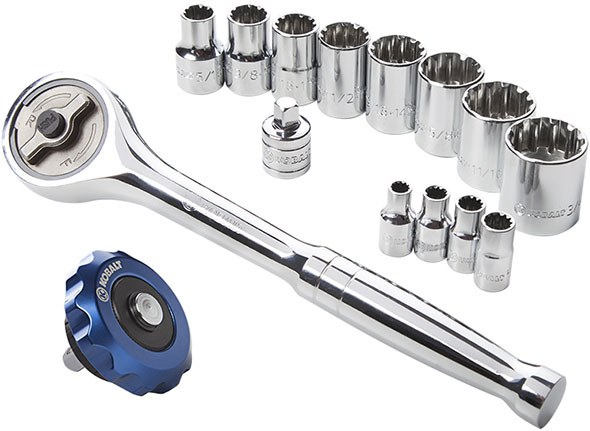 I recently reviewed the Kobalt Direct Drive gearless ratchet, and really liked it. It’s definitely worth checking out, once the displays hit stores in November.

There will also be a 15pc ratchet set that also comes with a free bonus 1/4″ Kobalt gearless palm ratchet. At least it looks like a free bonus, as the 14pc and 15pc sets are the same price.

Usually, Kobalt’s holiday-timed flagship tools are released in two versions – one that’s sold in-stores, and one that’s sold online with a free bonus bit set, holster, or other accessory. It looks like this 15pc set will be the online-only special promo set.

You wouldn’t think that the palm ratchet would be gearless, due to how it’s used, but it is! The Kobalt gearless palm ratchet will also be available separately, for $10.

Both Kobalt Direct Drive ratchet sets will probably drop in price a little as the holiday season kicks off in November, so check back for the latest price. Now, both sets are each priced at $30.

As far as semi-gimicky holiday tool releases go, this is one of the best and more useful ones that I’ve seen in recent years.