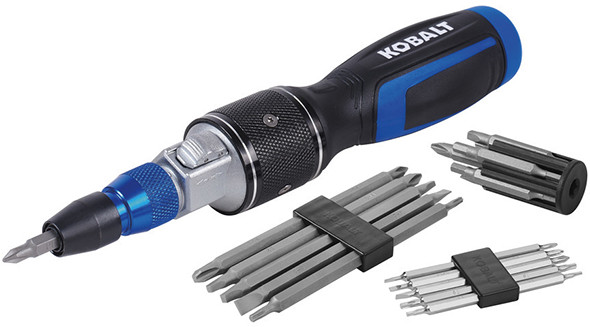 Lowes has come out with a new Kobalt Double Drive screwdriver for the 2016 holiday season, and it’s definitely worthy of a closer look.

I know what you might be thinking, and I thought the same – “Oh no, not another one!: But this one’s different.

There have been new Kobalt Double Drive screwdrivers at Lowes from 2011 thru at least 2014, and a ratchet too. I don’t think I noticed anything new for last year’s holiday shopping season, but this one is definitely new and interesting. 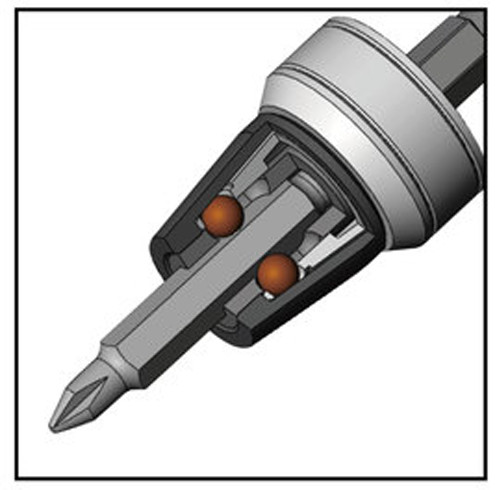 So what’s so special about the Kobalt Double Drive QL3 Quick Load screwdriver? Well, there are 2 parts to it.

I’ve got a test sample in-hand, and the Kobalt QL3 Quik Load bit chuck is both quick and easy to use, and securely grips all the double-ended screwdriver bits that came with the set.

The Kobalt Double Drive screwdriver’s QL3 Quik Load chuck features a ball bearing lock mechanism, with 3 bearings evenly spaced out. I haven’t dissected the bit holder (yet?), but it seems that the 3 balls place even and constant pressure on the flats of hex bits, keeping the bits both centered and locked in place.

The long insert bit that is pre-inserted in the screwdriver’s bit holder has a notch, but the others don’t. The QL3 Quick Lock and Quick Load chuck does a good job of holding those bits in place, even when they’re a little slippery from a layer of protective oil.

The Kobalt Double Drive QL3 screwdriver bit holder works on smooth and straight screwdriver bits, and not just ones that are grooved or specially notched!! 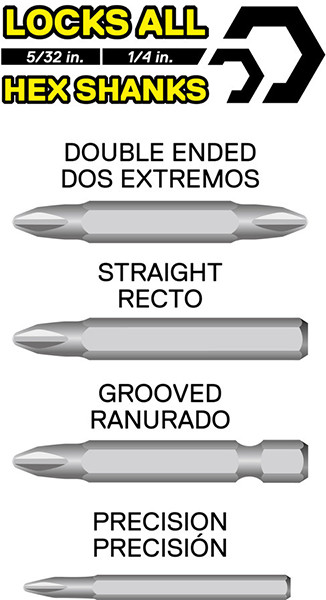 There seems to be a recess within the base of the tool, and the 5/32″ (4mm)  precision screwdriver bits fit right in. The QL3 Quik Lock chuck’s triple ball bearing bit retention system holds the front ends centered, and secure within the bit holder.

I don’t think I have seen anything quite like this before, and I love it!

Lowes is bundling this new Kobalt Double Drive screwdriver with a selection of double-ended screwdriver bits, although only the round bit holder will fit inside the handle compartment. You need a bit of space for the QL3 Quik Load chuck to work properly, hence the long and double-ended bits. They don’t have to be double-ended, but it makes sense for them to be.

It can also work with longer insert bits, but 1″ bits seem to be a little too small. I’ll be testing the driver to see if 1″ screwdriver bits are at all workable, but right now I don’t believe them to be.

Update: 1″ insert bits work great! They only stick out a little bit, but are easily removed. I tested standard 1″ screwdriver bits and reduced diameter bits, which I’m guessing work well because the triple ball bearing holder can also work with precision bits. Longer bits will work better, but I didn’t have trouble with 1″ bits pulled right from my toolbox.

The new Kobalt Double Drive screwdriver has a mostly-plastic handle, with a threaded end cap that removes to open up a bit storage compartment.

Here’s a video review I did of the original Kobalt Double Drive screwdriver, showing how the gearing system works:

Here’s a summary of what you need to know:

The Double Drive mechanism has special gearing that translates twisting of the handle into rotation of the bit in the same direction.

Flip the direction selection lever to one side, and you get Righty Tighty, Lefty Tighty. Push it the other way, and you get Lefty Loosey, Righty Loosey. The Double Drive screwdriver makes quick work of long fastening tasks, and is even faster than a traditional ratcheting screwdrivers.

The screwdriver is not well balanced, due to the weight of the Double Drive gearing and QL3 chuck towards the front and middle of the screwdriver, and so you’ll probably want to make use of the bit holder compartment to add weight to the handle. And you’ll definitely want to use this screwdriver with two hands, as it’s designed for. Holding the gear collar in one hand, and turning the driver with the other provides for comfortable operation.

The direction selection mechanism on my test sample is a little temperamental, not wanting to switch as easily to the forward direction, for driving fasteners in, at least not as effortlessly as it can switch to the reverse direction for loosening and removing fasteners.

I have found that this is partially due to my muscle memory. I’m pushing the slide switch down and forward. Putting less downwards pressure seems to do the trick. With a little use, I’ll likely get this down to muscle memory.

Not exactly. I’ve heard from a lot of professional users over the years who LOVE using the previous iterations of the Double Drive screwdriver, for applications such as installing wall switch plates and outlet covers with their usual slotted screws.

The QL3 Quick Lock and Quick Load chuck is definitely a nice feature, and I might explore some of the other screwdrivers that feature it. Kobalt’s not the only brand using this feature – I found several Maxtech QL3 screwdrivers and ratcheting screwdrivers over at Amazon, but it’s uncertain as to whether they have the same dual bit size compatibility.

Apparently Lowes has made a couple of other Kobalt QL3 screwdrivers, and I’ll be checking those out too.

I’m willing to bet that the price will be reduced during the holiday shopping season, probably to $20, maybe even lower.

I’m also really hoping that we’ll see this QL3 Quik Load chuck sold by itself, as an add-on for standard 1/4″ hex screwdrivers, and for use with cordless screwdrivers. But, it is noticeably longer than other locking bit holders I’ve used.

This made me think of another potential tradeoff. The QL3 Quik Load chuck gives the screwdriver greater width compared to traditional 1/4″ bit holder shafts. As such, it might not work as well in tight work spaces or recesses. But, this set does make up for that a little, but giving you a couple of longer screwdriver bits.

Thank you to Kobalt and Lowes for supplying the test sample unconditionally.