ToolGuyd > Hand Tools > Screwdrivers > New Kobalt Double Drive Stubby Screwdriver
If you buy something through our links, ToolGuyd might earn an affiliate commission. 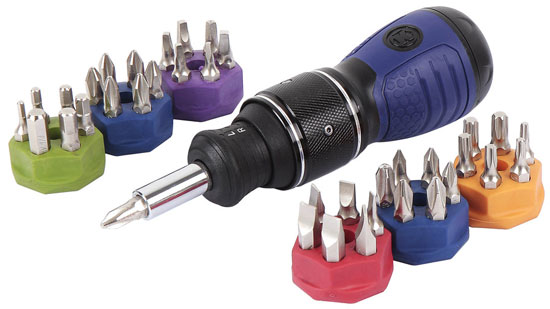 There is also the full-size and mini Double Drive screwdriver set that came out last Fall, but that set is currently on sale for $10, which indicates it might be on the path to being discontinued.

With this set, you get a newly designed stubby-sized screwdriver handle, and a total of (36) standard 1/4″ hex insert bits. We haven’t seen the packaging, but there is probably also a small case that keeps everything together.

What’s interesting about this stubby screwdriver is how Lowes and Kobalt describe it as being a ratchet screwdriver. With other Double Drive screwdrivers, you must hold the the front sleeve with one hand (the knurled metal part), while turning the driver handle with your other hand.

Since this stubby screwdriver is so short, perhaps the Double Drive mechanism works differently, but probably not. All Double Drive screwdrivers can be used in the same way as ratcheting screwdrivers if you only grip the handle and let the sleeve rotate freely.

You can order this stubby driver online for home delivery (free shipping on $49+ orders), and they will also soon be available online with free in-store pickup, as well as in stores.

I always felt that the full-size Double Drive screwdrivers were a tad long and imbalanced, and am really glad that Kobalt decided to come out with a stubby version. This of course means there’s not a lot of room for built-in bit storage, but that’s a feature I hardly ever miss anyways.

From the looks of it, the handle cap unscrews to allow for one of the color-coded bit holders to be popped into the handle for convenient on-the-go storage. The color coding is a nice touch, as it allows you to grab the bit set you need without having to sort through a box of bits.

The direction selection switch is different, but that doesn’t mean the internal gearing configuration has been altered compared to other Double Drive products. As a consequence, the driver has a more streamlined geometry, which is necessary when two hands are used for Double Drive operation.

Lowes’ labeling is different than with their other Double Drive screwdrivers, as they call this the Kobalt Double Drive Stubby Ratchet Screwdriver. This suggests to me that the driver was designed with one-handed operation in mind. That is, this model might have been designed thinking that most users will want to use it as a ratcheting screwdriver and not a true Double Drive driver.

While I at best feel neutrally towards Kobalt’s full-size Double Drive screwdrivers of past years, I am really looking forward to their new standalone precision and stubby drivers. At $15 for each set, they’re priced to sell. Last year I wished that the precision and full-size driver set were split into separate sets. Ironically, this year I wish that the new precision and stubby driver sets were combined into a single set with bundle pricing, but I am nonetheless glad to see the separate offerings.