ToolGuyd > Hand Tools > Wrenches > Kobalt Gearless Ratcheting Wrenches
If you buy something through our links, ToolGuyd might earn an affiliate commission. 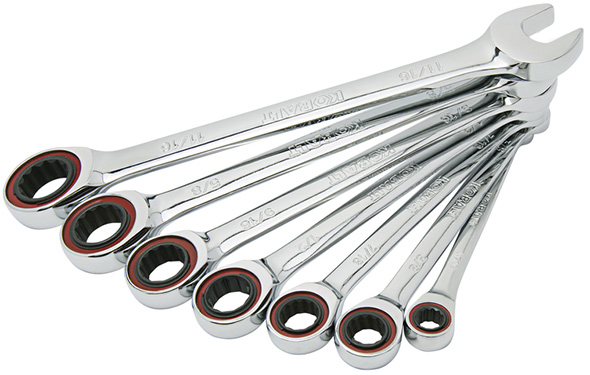 A few weeks ago, as I was strolling through the leftovers of Lowe’s “Special Buy” holiday tool deals section, I spotted these Kobalt gearless ratcheting wrenches for half-off. I didn’t even realize that these wrenches existed — somebody missed a press release at some point.

Stuart’s Note: Err… umm… sorry! More about my hesitation at the end.

Gearless ratcheting mechanisms can come in handy in situations where you need to advance a fastener but cannot swing a wrench or ratchet very far, due to tight clearances or obstructions. Or at least that’s usually the main selling point.

The gearless roller bearing drive will grab the fastener with the smallest movement, allowing you to make the most out of every swing

You can also try to solve this by having finer teeth with a conventional ratcheting mechanism, but finer teeth aren’t as strong. Another way to solve this problem is to use offset pawls like the Gearwrench dual pawl ratchet, which gives you finer positioning without the gearing getting too small to be practical.

These Kobalt gearless ratcheting combination wrenches are constructed from chrome vanadium steel with a high-polish finish. They have standard 12 point box ends, not the Multi-Fit sockets that come with the ratchet set, so there are separate metric and SAE sets, each with 7 wrench sizes.

The sizes are stamped in large “easy-to-read” markings and the colored rings around the ratcheting end make it easy to identify the Metric and SAE wrenches: red for SAE and blue for Metric. 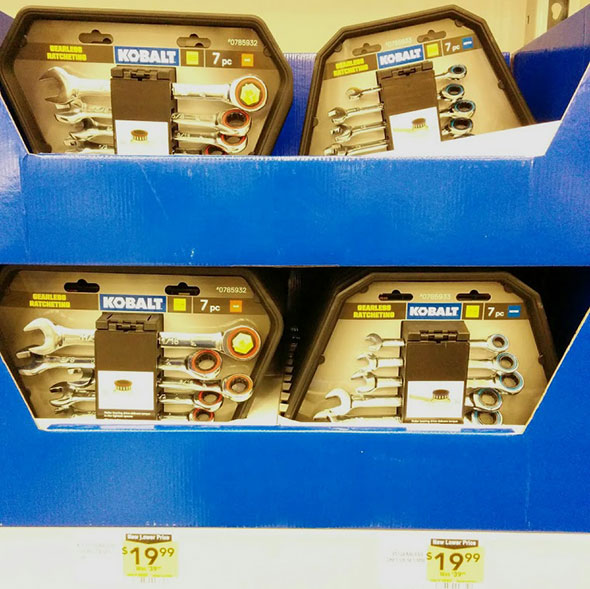 These Kobalt wrenches come with a lifetime “hassle free” guarantee. The SAE and the Metric 7 piece wrench sets are now marked down to $20 both online and in store.

After thinking about it for a while, I went back to Lowes and picked up both 7 piece sets along with some other special buy items that have been marked down. I’ve been looking for a set of ratcheting combination wrenches for my shop throughout the entire Holiday season, and have been pretty disappointed with the deals. This is the first time I saw something that I thought was at a good price/quality point.

I knew I was taking a bit of a risk on them because they aren’t conventional ratcheting wrenches, but I had picked up the Kobalt gearless ratchet set for $10 when Stuart wrote about it back in December of 2014, and I’ve been happy with the ratchet.

The gearless ratcheting mechanism is a little weird to get used to. For one thing, it’s silent. There is no clicking sound for feedback that the tools is actually ratcheting. And as Stuart mentioned in his teardown, these don’t exactly have o° of swing, as there is a minimal but-not-zero distance they have to be pulled back to advance the fastener

The few times I’ve tried these wrenches so far they’ve worked as advertised. I’ll keep you informed if I have any issues.

1) If there’s a factory defect, or a wrench breaks, will a replacement be available in 2017? 2018? I have been hearing more and more that Craftsman and Kobalt tools from a set must be exchanged as a set. So if let’s say the 1/2″ wrench shows a defect or breaks due to a defect. If only sets are available, you’re only going to be able to exchange or return it as part of a set, and that’s only as long as the set is still available.

2) If one wants to expand with intermediate or larger sizes, will they be available? The SAE set lacks 11/32″ and 3/4″ sizing. What about 1″? But to be fair, most consumer and enthusiast ratcheting wrench sets are small and focus on most-used DIYer sizes.

I too will be interested in hearing about how well they work for Ben over time. Personally, I wouldn’t want these to be my first or only ratcheting wrenches. But I also have an affinity towards reversible ratcheting wrenches and somewhat of a strong hesitation towards non-reversible types.