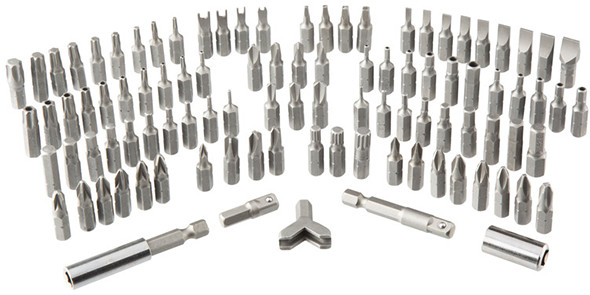 It looks like Kobalt has come out with a new 100-piece screwdriver bit set. I hadn’t seen this set before, and so I’m presuming it’s new.

There are a couple of standouts in the set, such as the v-shaped hook and eyelet screw installation bit, the tamper-proof Torx bits, what look to be hollow ground slotted bits, and every type of 1/4″ hex adapter you might need. There are a bunch of other useful screwdriver bit and sizes as well, such as Phillips, hex, Torx, and other specialty sizes.

There are 57 standard bits, 17 specialty bits, 21 tamperproof bits, and 5 adapters. The bit holder is magnetic, and the bits should work with any other standard 1/4″ hex insert screwdriver bit holder as well.

All the bits fit inside a blow molded case that Kobalt says features a Zerust vapor corrosion inhibitor to prevent rusting.

This seems like a reasonably large assortment of screwdriver bits at a decent price. It comes down to about 30 cents per bit or adapter. (See update below.)

It’s sometimes (usually) good to have a bit assortment like this around, for those rare times you come across a specialty fastener. You’ll probably never use most of these bits, but it just takes a couple of one-time uses for a set like this to earn a place in your toolbox.

Update: You can find similar assortments from Amazon ($10.20 for this “Pit Bull” bit set) and elsewhere for $10-$15. The quality of this Kobalt set might be different, but is probably the same given the similar if not identical bit selection.

Even if the Kobalt set was of better quality, unless (until?) it dropped in price to $15, the lower priced no-name sets are going to be better buys.