ToolGuyd > DealGuyd > Kobalt Tools are Back at Lowe’s with Black Friday 2019 Tool Deals
If you buy something through our links, ToolGuyd might earn an affiliate commission. 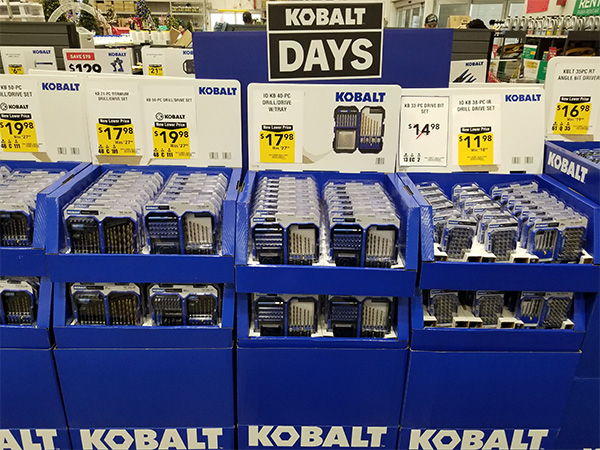 I visited a couple of Lowe’s stores this weekend, to see what their holiday and Black Friday 2019 tool deal displays had to offer. Quite frankly, the volume of Kobalt tool deals had surprised me.

But, I’m glad to see a nice selection of Kobalt tools for the 2019 holiday shopping season.

I think it would be unwise to describe this as a resurgence of any kind. However, there were some good deals to be had.

No, I’m not talking about the Kobalt ratcheting rapid-adjust wrench, which I find to be cringe-worthy. But the many Kobalt homeowner tool sets, plier sets, and some of the other assortments? They look to be decent. Kobalt tools have traditionally been decent mid-level offerings, with their holiday specials reasonable entry-level options.

A lot of tool users, especially new homeowners, hobbyists, and maybe even some pros, look to higher value offerings for stretching how far a limited budget can go. I had expected to see more such offerings from Craftsman, but most Craftsman “special buys” seem to be focused on mechanics tools and individual core tools. As such, I found many of the Kobalt holiday season special buys to be complementary to the Craftsman offerings.

However, this also means that you have a greater variety of entry and low-mid-priced offerings. At Home Depot, in contrast, we’re bound to see many of their Husky tools aimed at entry and low to mid-priced levels, and other more pro-oriented brands positioned as the “better” options in a good-better-best scale.

Lowe’s has some “pro” tool deals that were moved to the contractor counter at the far side of the store, but I do wish there were more. Sorry, I digress.

Kobalt is “back” for the 2019 holiday shopping season at Lowe’s. I bought a set of pliers for quick review and comparison purposes. This is the kind of set I would have wanted when I was first starting out. At that time, there were limited options, and I went with a Stanley 3pc set for maybe $10, With the Kobalt set, it offers 5 tools for $18.

There is one hesitation…

Kobalt has a lifetime hassle-free guarantee on most hand tools. We’ve heard of some readers experiencing difficulties, because Lowe’s no long sells as wide a variety of Kobalt tools as they used to.

You should never have a problem with your Kobalt tool. However, if you do, return the item to the place of purchase for a free replacement. No questions asked. This warranty gives you specific legal rights, and you may also have other rights that vary from state to state.

No-hassle replacements might be hard to do if Kobalt doesn’t sell the same or similar hand tools year-round anymore. If the head falls off your hammer in the middle of the year, will Lowe’s be able to replace it?

I guess my stance on this is that I’m happy to see Kobalt hand tools and assortments for the holidays, but feel it necessary to caution that the hassle-free lifetime guarantee might be less trouble-free than in past years. But, if a Kobalt tool fails or you’re unhappy with it, there should be a phone number to call, or you could try requesting a similar Craftsman tool as its replacement.

Here’s the bottom line: Lowe’s might have cleared out a lot of regular Kobalt tools to make room for Craftsman offerings, but I think that the “Kobalt Days” gift center is worth a visit, at least for anyone looking to build their tool collection with typically-solid value-priced offerings.

“Kobalt Days.” It’s disappointing that we might be justified in taking this literally.

(Many but not all of the Gift Center deals are online right now.)