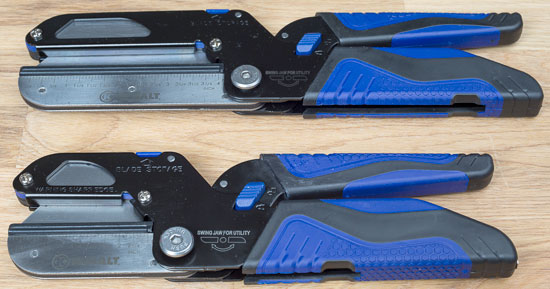 We recently talked about the new Kobalt Triple Cut utility cutters, which are new at Lowes this year for about $20 for the pair of small and large sizes. I had mixed feelings about the Triple Cut multicutter design, mainly since the large cutter requires a specialty blade size, but decided to buy a pair for testing.

As you can tell from the rating, I was not very pleased with the Triple Cut design. The design is nothing special, they’re not very comfortable to use, they’re not at all versatile, and they perform mediocrely.

In a college-level introductory physics class, 11 out of 20 is a B-. Here on ToolGuyd, anything under 14/20 severely worries me.

You can buy the Kobalt Triple Cut utility cutter set for $20 via Lowes, and a special multicutter set that includes a free bonus carrying pouch will be available during the holiday season (check availability). 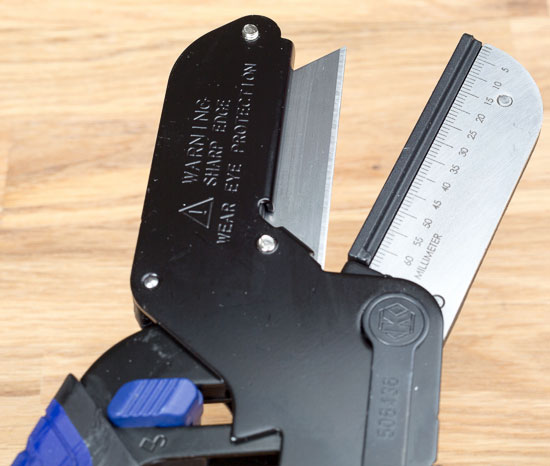 The Triple Cut set comes with two cutters, one small and one large. The small one takes standard 2″ utility knife blades.

You can use these cutters in a shears-like manner, or pivot and lock the lower jaw back into the handle to use them as you would a utility knife or small saw.

I didn’t really feel comfortable using the knife with the jaw pivoted back, as this exposes two full inches of razor-sharp steel. Gripping the two handles as one also reduces the feeling of control over the tool. It’s not very imprecise, but it’s not as precise as even the cheapest utility knife. If I need a utility knife or a saw, I’ll grab one of those instead of the Triple Cut.

The replacement blade compartment holds two spare blades until you need them, and can be opened with a fingernail. There are no instructions about how to change the blade, but I found that it requires loosening two screws on the left side of the tool. In the absence of instructions, I did find a little pamphlet advertising Kobalt’s hand tool boxes. 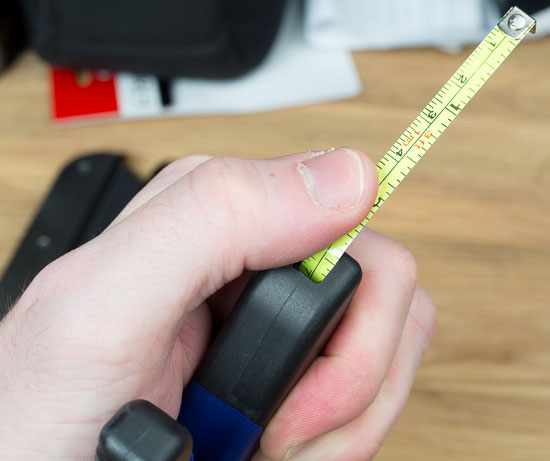 The small cutter comes with a built-in 3-foot/1-meter tape measure with metric and inch markings. It’s a little flimsy, but I suppose it might come in handy for measuring out small lengths of materials for cutting. 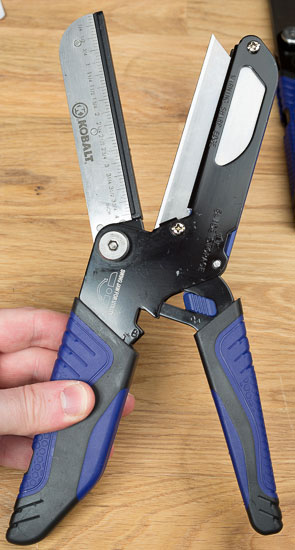 The large Triple Cut cutters are designed around a 4-inch blade. Lowes carries 5-blade replacement packs for about $5, but it is unclear if they will still be available one or two years down the road. That’s always a risk when you buy a cutting tool that takes proprietary blades. Extra-long utility knife blades do exist from other makers, but might not work with the Triple Cut. 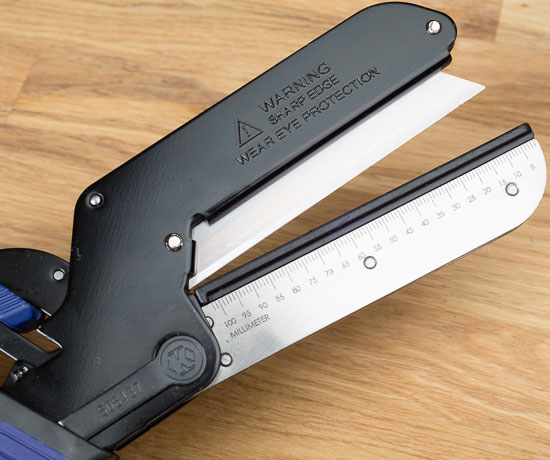 As with the smaller cutter, this size also features ruler scales on both sides of the lower jaw. 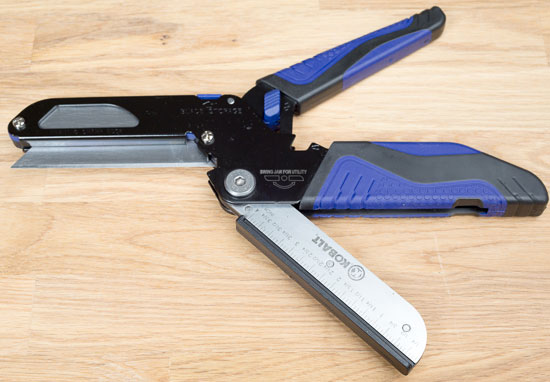 Folding the lower jaw back on this one exposes a 4-inch razor-sharp blade. In this image, the lower jaw is not pivoted back far enough. If you want to use the Triple Cut in its saw-like configuration, the lower jaw has to be pushed back further into the handle until it locks in place. 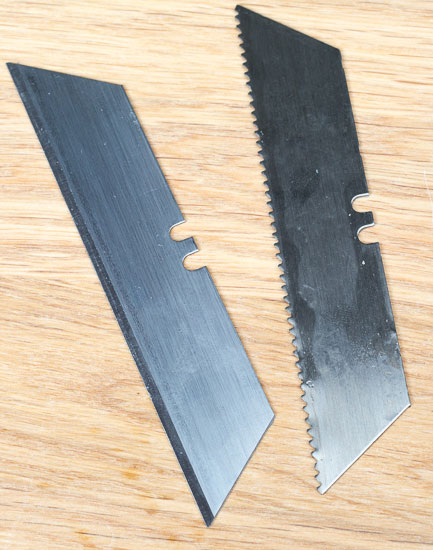 The larger cutter comes with (2) straight edge blades, and (1) serrated saw blade. Replacement blades are available in both edge styles. 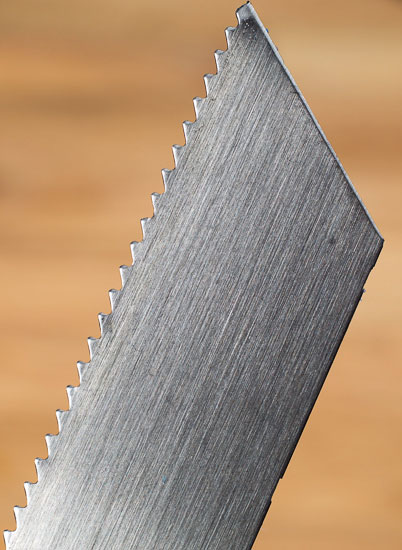 The serrated saw-tooth blade is fairly dull. I thought maybe this blade would be good for use on cordage, rope, webbing, and other such materials. It’s not. It’s not that great for sawing wood either.

Since the larger Triple Cut cutter has longer jaws, there needs to be a larger opening in the handle to receive the law jaw for when the tool is converted to its utility knife or saw mode. The sharp edges of the grip corners dug into my hands a little bit.

I typically use shears and plumbing cutters to cut things like fabric, cardboard, paper, tubing, hoses, small pipes, zip ties, plastic straps, and things like that. 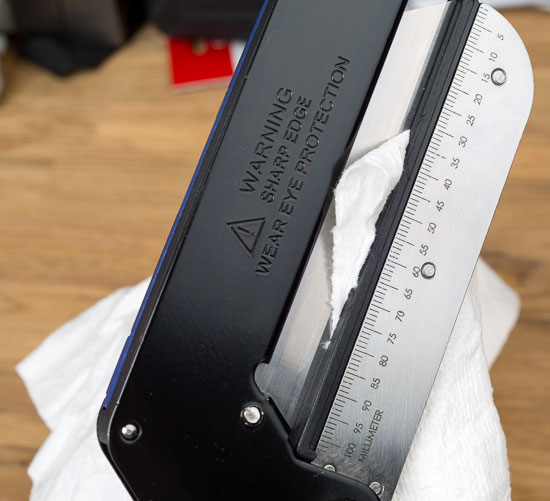 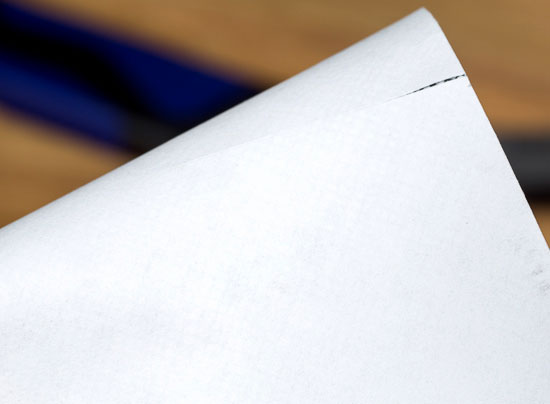 It can’t cut a paper envelope. 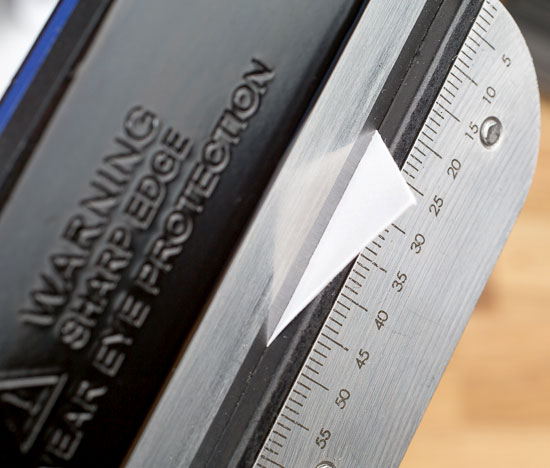 It can’t cut the corner of an envelope. 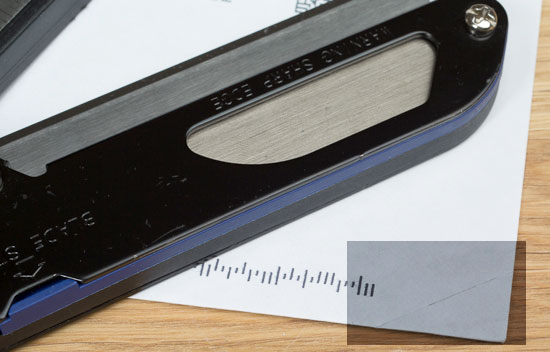 With firm pressure it managed to partially cut through the first layer of envelope. I enhanced the area in the small rectangle to show this a little clearer. 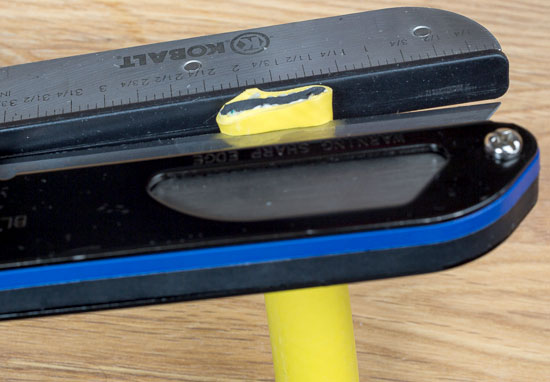 It can cut tubing and hoses. This is a reinforced air hose. 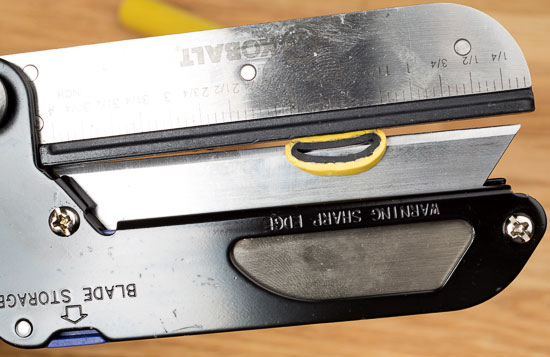 It didn’t cut through all the way very cleanly though. In the video I show this a little more. 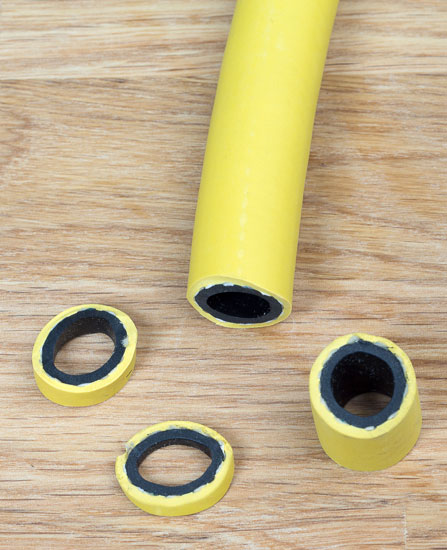 These aren’t the worst cuts I’ve made, but they’re not exactly clean and precise.

With the larger Triple Cut in saw mode, there’s not much that can be cut, as the cutting depth is very shallow. Any more than about half an inch, and the top of the tool interferes. If you can rotate the workpiece, you can work with slightly larger materials. Still, after seeing how slow the tool cuts with the serrated saw blade, a hand saw would definitely do a far better job – even if it’s a very small one.

I’m not going to sugar-coat this. I don’t like these Kobalt Triple Cut utility cutters. They offer nothing for me. They don’t cut cardboard, paper, or heavy paper towels. They easily cut soft small tubing, but bog down a little with anything thicker or harder.

Maybe the included blades are garbage, maybe the tools’ handle geometry is off and they need far more leverage.

I would return these without hesitation, but need to keep them around in case any readers want me to test them on certain materials.

I get it, they’re designed to cut three dimensional materials, such as vinyl trim and tubing, and that’s why they don’t work all that well on flat materials like paper and cardboard.

You know what would make these better? V-groove jaws that allow the blade to follow-through on cuts. That way it wouldn’t jam up on paper and other thin flat materials.

If you’re still interested, don’t forget that Lowes has a great return policy and satisfaction guarantee on Kobalt tools. These Triple Cut utility cutters don’t work that well for my needs, but maybe you’ll have better luck.

These other Triple Cut-like cutter options might perform better, but I haven’t tried them yet: Craftsman Handi-Cut, Alltrade CutZall, Utility Cutter (via Amazon).