ToolGuyd > Accessories > New Kreg Clamping Products: Inline Clamp and Bench Clamp Base
If you buy something through our links, ToolGuyd might earn an affiliate commission. 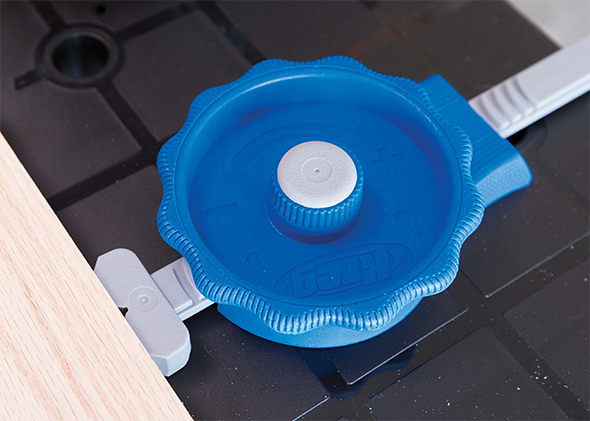 In November, you’ll be able to buy two new clamping products from Kreg: a new inline clamp, and a new base for your existing bench clamps. Let’s talk about the inline clamp first.

The plastic low-profile inline clamp fits into 3/4″ dog holes on your bench, and applies up to 250 lbs of pressure to the side of your work piece, giving you access to the entire top side. Its 1/2″ tall jaw can apply pressure either to an edge or corner.

The clamp can swivel 360° in the dog hole, and the clamping distance can be adjusted up to 4-3/4″ by twisting the large knob on top of the clamp. 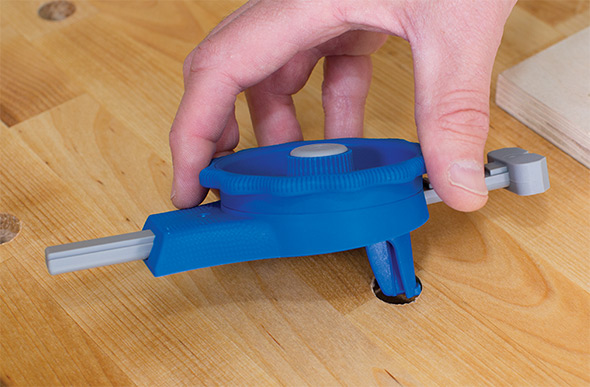 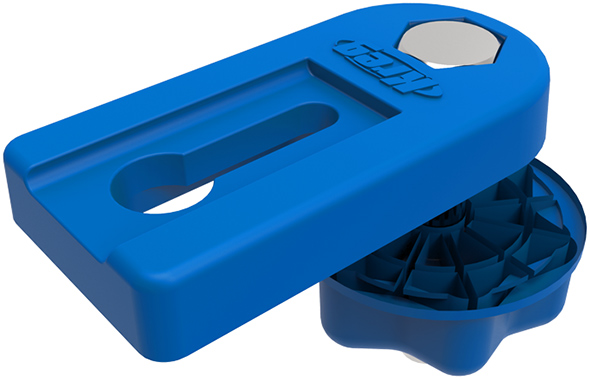 Unlike their other bench clamp mounting methods, which are permanent, the Kreg bench clamp base allows you to use one of their bench clamps on any surface with hole large enough to for a 1/2″ bolt, including bench dog holes.

Furthermore, you don’t need any tools, simply place the base into the top of the hole and thread the knob onto the bolt from the underside of the hole.

Any Kreg bench clamp can be attached to the base via the keyhole slot. With the clamp inserted, the cast aluminum base can swivel 360°. 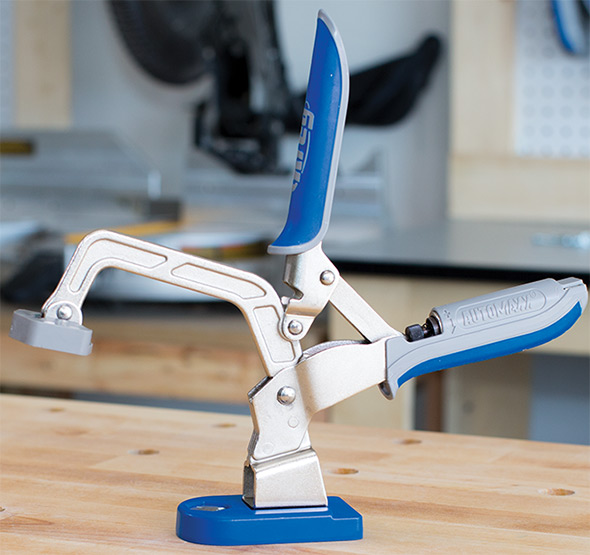 The Kreg bench clamp base will be available by itself for $20 or paired with a 3″ bench clamp for $50. 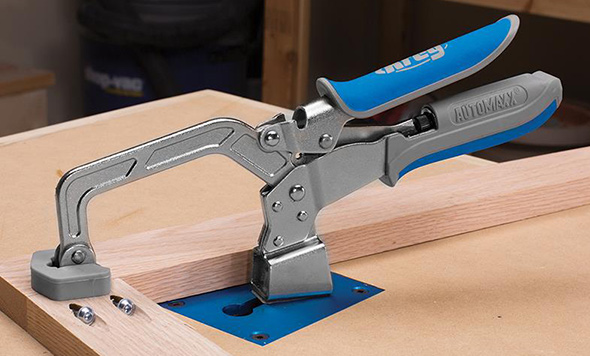 I saw the Kreg clamping plate on clearance several places last year, and while it doesn’t appear they are getting rid of it, I’m not sure it was a huge seller in stores. To install the plate, you needed to recess it into your bench — a rather permanent solution. With this new base, you can simply use existing dog holes.

At first, the plastic construction of the in-line clamp made me a little nervous, but then I thought about it. Plastic usually connotes that something is made cheaply, but there are plenty of very strong and rigid plastics that can hold up to the claimed 250lbs of clamping force. We’re just not used to seeing plastic in this role.

Does this mean this clamp will live up to its stated performance? Not necessarily, but rather than dismissing it outright because it is plastic, we can at least say it’s possible. Plus, an advantage of being made of plastic is that it won’t dull your tools if you run into the clamp — like if you accidental hit the clamp with a plane or chisel.

My biggest problem with inline clamps is that they tend to lift whatever is being clamped off the table. I have even seen this in clamps that are themselves firmly secured to a workbench or table. Even if the clamp itself doesn’t move, they might sometimes still lift the work piece off the table surface.

Ideally there would be a downward component of force that would press the object against the work surface, but with over 4″ of adjustment I can’t see how they could slope the clamp to provide that downward force.

Festool Mobile Sawing Table is Only Available for Pre-Order