Leatherman’s Crunch is a unique older model multi-tool that features Vise-Grip-style locking pliers that can clamp onto work materials up to 1-inch wide.

In addition to the Leatherman Crunch, several other locking pliers-style multi-tools were developed and produced in the past, such as the Gerber Grappler, Kershaw and Craftsman A100, and Schrade/Vise-Grip Tough Grip. Of these, the Leatherman Crunch is the only locking pliers multi-tool that is still manufactured today, although the Gerber can still be found new at rather high prices.

It is also worth pointing out that, compared to all the other locking pliers multi-tools, the Crunch is the most compact and portable when folded up.

Similar to the other locking pliers multi-tools, the Crunch features a relatively small number of additional tools and functions when compared to other traditionally styled multi-tools built with combination pliers.

I have been using the Crunch for a few weeks now and have been actively rotating it into my everyday carry tool kit so as to use it as often as possible. 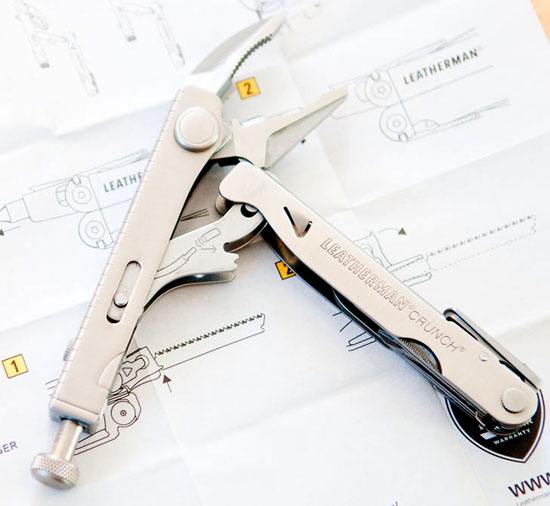 When I first received the Crunch, my biggest surprise was its small size. I had assumed it would be closer in size to Leatherman’s SuperTool 300, but is actually smaller and narrower than the Leatherman Wave.

The Crunch has one of the oldest-feeling designs among Leatherman’s current tools, right alongside the keychain-sized Micra. It is also relatively lightweight at just 6.9 ounces, compared to the Wave and SuperTool 300 which weigh 8.5 and 9.6 ounces, respectively.

It also seems very cleverly designed to feel just like a pair of Vise Grips when assembled, while being very compact when folded for carrying or storage.

The plier head is actually only permanently attached to one side of the tool. The upper jaw attaches to one handle with a large pivot, and the lower jaw features a double-sided detent at its base that snaps into the other handle during assembly to complete the pliers. It is the tension adjustment bar that actually holds the two sides of the tool together.

Assembly of the Crunch pliers is straightforward. 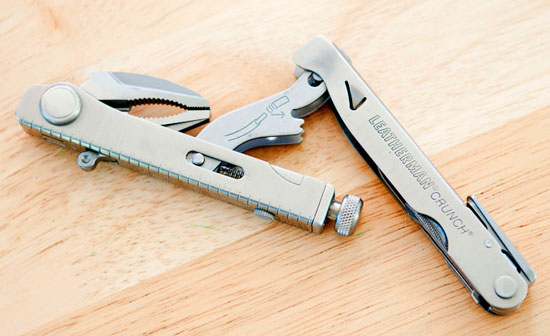 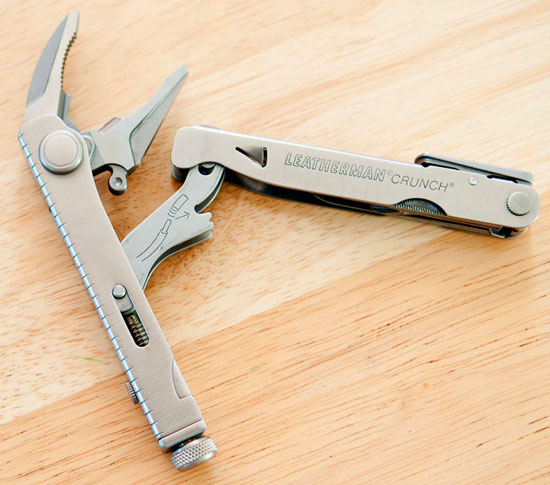 Step 2: Swing the pliers’ jaws out from within the handle. This can be done by pushing the deployment knob that protrudes from the outer part of the upper jaw’s handle. 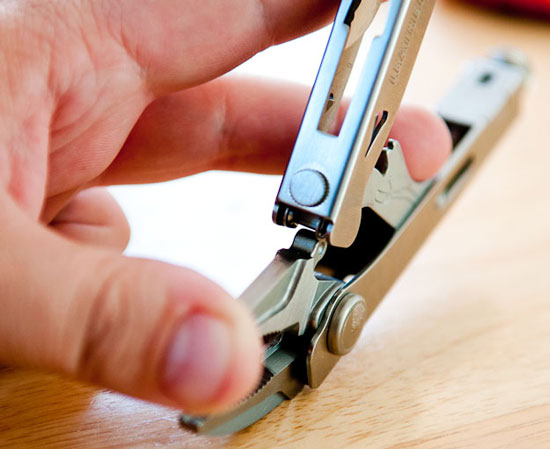 Step 3: Attach the lower jaw to its handle.

Here you can see the jaws’ multiple gripping zones. At the tip, finer teeth help the pliers grip onto thinner materials. There is also a pin vise groove that runs down the middle of the jaws’ tips that can very tightly hold small pins, wires, nails, and similar types of objects. Towards the middle, the curved jaws and larger grooves help provide a strong grip when clamping pipes and other larger materials. At the end, near the beefy pivot, are soft and hard wire cutting blades. 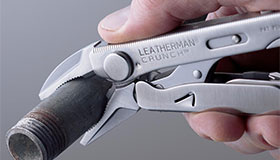 Once assembled, the Crunch feels and operates very similar to a small set of Vise Grip pliers. I have found the locking pliers to be surprisingly useful. They can be latched onto similar sized objects as traditionally styled multi-tools, but once tightened the user can focus on holding or turning rather than also squeezing.

When the tool is set with little or no tension, it is possible to use the pliers in a similar manner as standard pliers, but the temporarily attached side does have a tendency to pop loose. This is not an issue when tightening the jaws due to the handles’ cupped and encapsulating design. So you can use them as non-locking pliers if you really wanted to, but your experiences might vary.

While the Crunch feels like a marvel in engineering, it also seems to be a masterpiece in mass-produced fit and finish. The blades are not too stiff or too loose, while the handles and jaws are manipulated with ease. The jaws fold back and into relief cuts in the handles with just enough clearance, and the detached detented bottom end becomes a slight flipper/button to push the jaws back out when needed. A spur on the Phillips driver helps to clip the two handles together when folded.

Leatherman squeezed all of the Crunch’s fold-out tools into the handle opposite the one the plier jaws are stored in. An active locking lever secures opened tools in place, which makes the tools safer and easier to use.

The Crunch has a total of 15 functions:

The 2 pliers, cutters, and pin vice listed above are all features of the plier head/jaws alone. It puts together over twice the features (15 vs 7) in a tool very close to the same size as a Leatherman Skeletool.

As with most other multi-tools the Crunch features a built-in knife blade. Its other tools and functions include small, medium, and large screwdrivers; a wood/metal file, 8″ ruler, Phillips screwdriver, and 1/4″ hex bit driver.

The knife blade is made from 420HC stainless steel and has a sheepsfoot blade profile. It is fully serrated along its full 2.2-inch length. While I am not usually a big fan of serrated knife blades, in this tool I feel that the serrated cutting edges was a great design choice as the serrations improve the cutting capacity of the small blade.

The knife is obviously not the centerpiece of the multi-tool, but even so the serrations allow it to make quick work of many cutting tasks that a user may encounter. As with most other Leatherman tools, the knife blade was very sharp out of the box.

I like how Leatherman opted to give the knife blade a sheepsfoot profile, as it makes the knife feel very controllable. 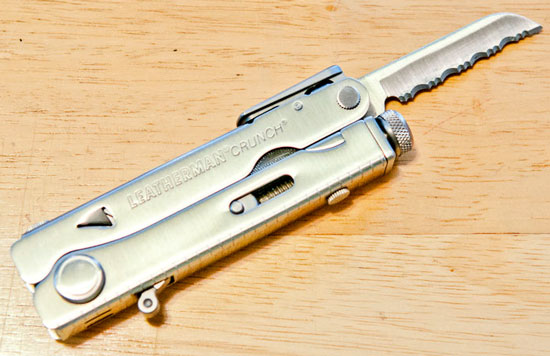 One thing I am glad to see is that the lock adjustment knob does not interfere with use of the knife. With the blade extended and handles closed, the cutting edge of the blade starts about 1/4″ further away from the base of the blade.

If you find yourself needing a knife blade for regular use, I would recommend carrying a separate pocket knife. The knife blade on the Crunch can be used for common cutting tasks, but deploying the blade is a two-handed, multi-step process.

Most of Leatherman’s other current multi-tool models have externally accessible knives designed for quick and easy one-handed blade access, but this isn’t possible given the Crunch’s pliers design. 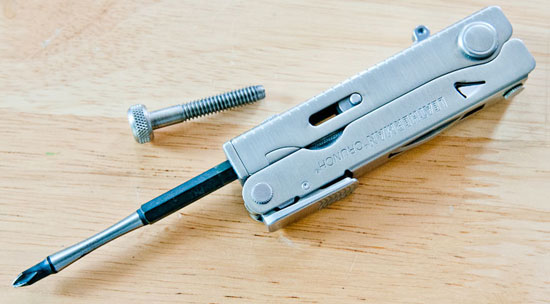 The locking knob is cleverly engineered to be completely removable, and when removed it reveals a 1/4″ hex bit holder that is compatible with standard screwdriver bits. This is a great bonus that would allow a user to add a few additional screwdriver bits and maybe even a 1/4″ hex to square drive adapter and sockets to form a very compact but capable tool kit. 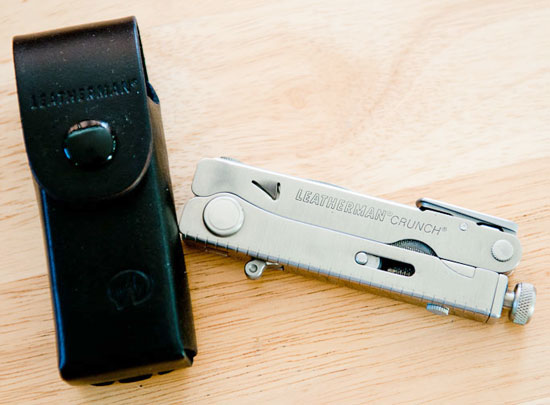 Overall, I feel that the Crunch is a great multi-tool. In addition to everyday use, I think it would be an excellent addition to a small car or bike toolkit for quick impromptu repairs.

I am sure there are a few other niche scenarios where this tool would be ideal over non-locking pliers, but I think its compact size and decent feature set make it well suited as an all-purpose everyday carry type of tool. Perhaps Leatherman could have added additional tools and features to the design, but not without the Crunch getting bulky. If tools like eyeglass screwdrivers and scissors are a top priority for you, there are plenty of other multi-tools to choose from.

The Leatherman Crunch is a very unique, well designed, and high quality multi-tool that deserves serious consideration for tradesmen, handymen, and even DIYers. It crams a lot of capability into a very portable package.

The Crunch tested and featured in this review was purchased at its full retail price from Amazon.