ToolGuyd > Hand Tools > EDC, Pocket, & Multitools > Leatherman OHT Review
If you buy something through our links, ToolGuyd might earn an affiliate commission. 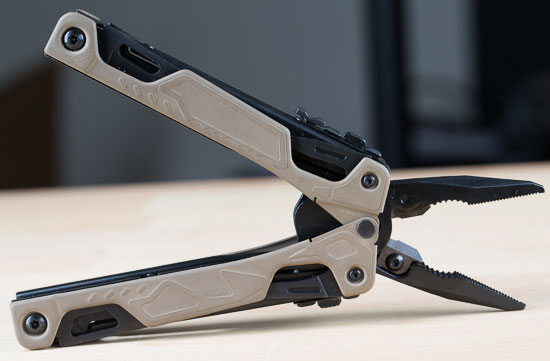 Leatherman’s new one-handed multi-tool is the brand’s first slide-to-open pliers-based multi-tool. I snagged a tan OHT from Cabela’s before they sold out and have been testing it for a couple of days now.

I reviewed the Gerber Flik a couple of months ago, and while it proved to be a good multi-tool, it lacked some of the features I knew Leatherman was bringing to the table with the OHT. After more than ten months of eager anticipation, I finally had an OHT in my hands! 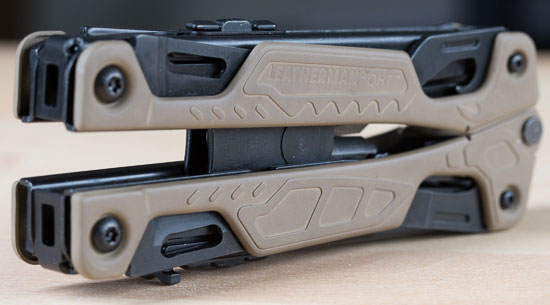 My first thought about the OHT? Ummmmm…

That’s right, “umm.” Months of anticipation and hype build-up and I was staring at the darn tool not knowing what to think. The pliers deployed with a snap, they closed somewhat clumsily, and the primary knife blade was smaller than expected.

There are numerous crevices and spaces in the OHT’s housing where debris can accumulate. This makes me wonder how well the tool will perform in the field should sand, dirt, or grit find their way inside the tool, but Leatherman’s marketing materials say the tool was designed for use in extreme environments. 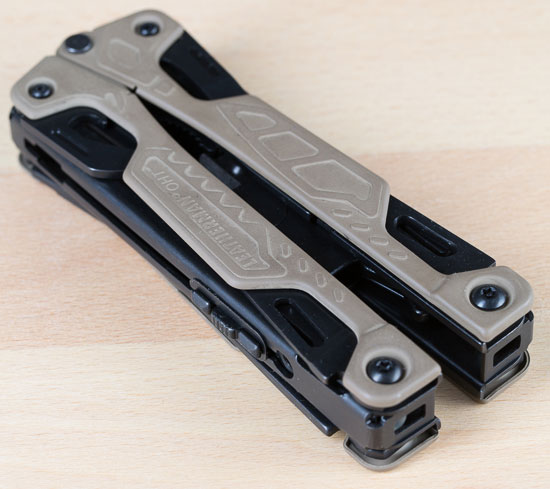 While shaking the tool to listen for pivot rattling, it was clear something was loose inside the tool. A couple of more shakes later and a small translucent bead popped out. When I say small, I mean about the size of a small caper or #6 socket cap screw head. The bead seems to be some type of polishing media that got trapped inside the tool during assembly or finishing at the Leatherman factory.

Once the foreign object was removed, the pliers become much easier to close with one hand. Or maybe I just broke it in a bit.

The first time I put my new OHT to use I was convinced that it was definitely worth the wait. 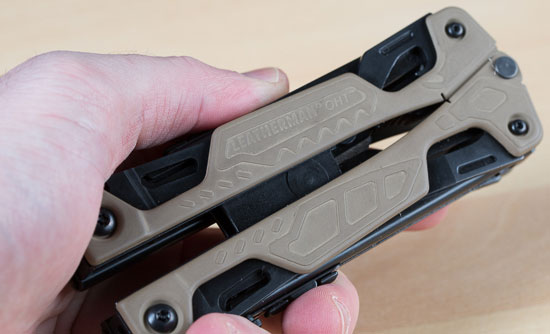 The pliers deploy quickly with a flick of the wrist, but if you hold back you’ll have to flick the tool a second time. You can also slide the pliers up and out manually, but that’s not as much fun.

This is not the first Leatherman tool to feature spring-action pliers, and hopefully it won’t be the last. 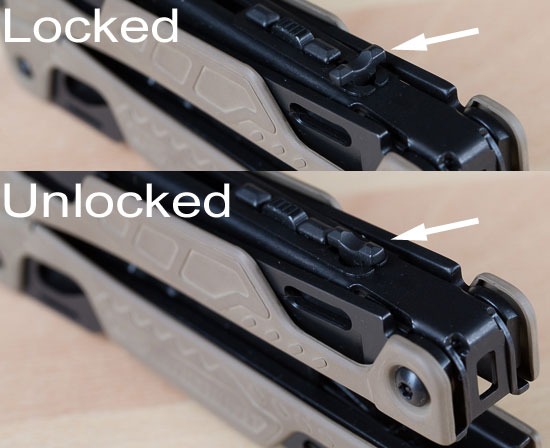 The pliers’ docking lock (for lack of a better term) is only found on one side of the handles. On the other side, there’s an empty hole. Why? Symmetry cuts down on manufacturing costs. But besides that it’s cut with #8-32 threads, presumably to create a cleaning rod attachment point.

To retract the pliers, squeeze two buttons on opposite sides of the tool and turn it upside down. The weight of the handle allows it to fall down over the pliers. So you’re not exactly retracting the pliers, you’re holding the pliers still and allowing the handles to move over them.

It’s not always easy to close the tool one-handedly, but that’s okay. There’s no shame in enlisting the help of your second hand to manually retract the pliers. 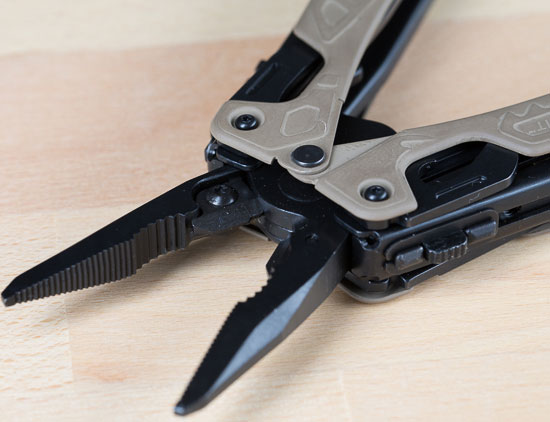 Like the Rebar and SuperTool 300, the OHT features user-replaceable 154CM wire/hard wire cutter blades. The replacement inserts and Torx key kit will set you back $10, but that’s a lot less than the price of a replacement tool. 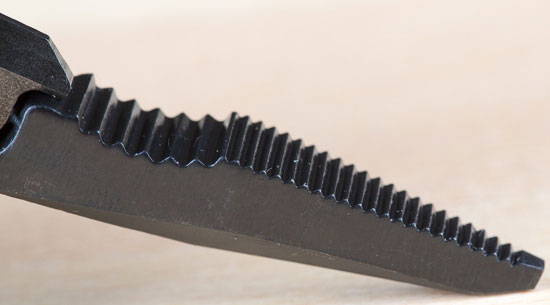 I have been babying the jaws of the pliers, but they seem strong and durable enough for heavy use. Time will tell, but to be fair I don’t really expect to wear the serrations round. 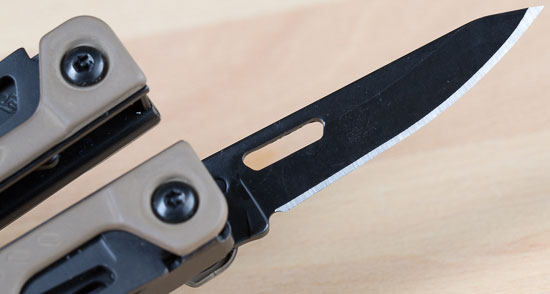 The 420HC plain edge knife blade is about 2-1/8″ long, which is a compromise due to the tool’s design. Realistically, there is no way Leatherman could have made the blade longer without completely sacrificing any of the minor (but still essential) tools.

Some people won’t like the small size of the knife, but those who need a longer or stronger blade can always opt to carry a heavy-use folder or fixed-blade knife.

If you don’t get hung up on the compromised size, you’d see that the blade is strong and sharp with a thick spine. 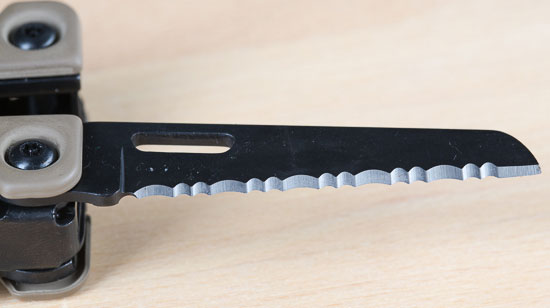 You also get a 420HC  serrated knife of about the same size with sheepsfoot profile. 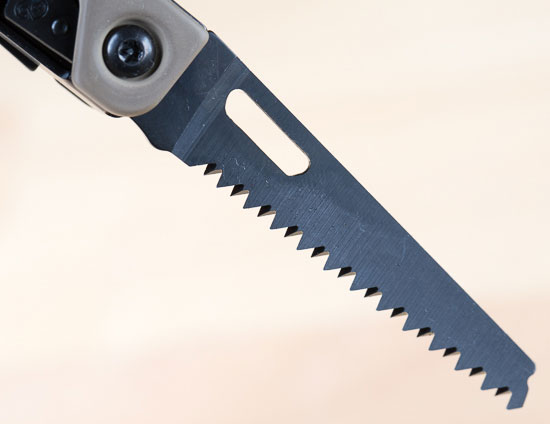 Other than being slightly shorter, the wood-cutting saw blade doesn’t seem too different than those found on other Leatherman tools. 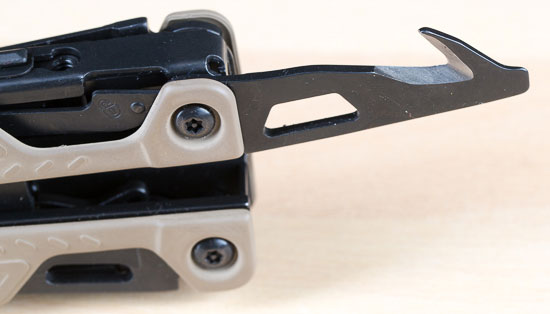 The strap cutter is tipped with a medium slotted screwdriver and doubles (triples?) as an oxygen wrench. 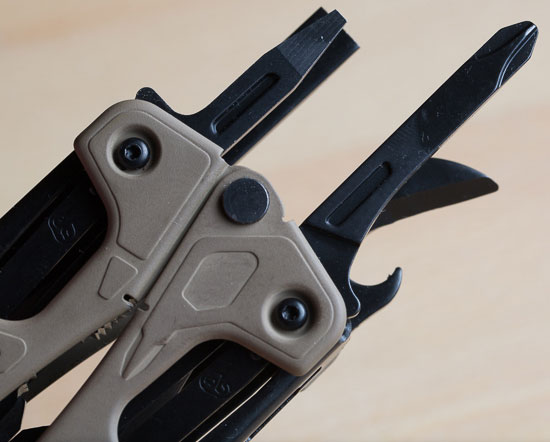 There are 8 fold-out tools, and 8 visual clues as to which tool is located where. With practice it might be possible to identify the tool location cues by touch, but it will be quicker and easier to just memorize where each of the tools are.

All of the knife blades and tools lock open for use, and a passive mechanism – probably ball detents – help prevent the tools from flailing out accidentally. 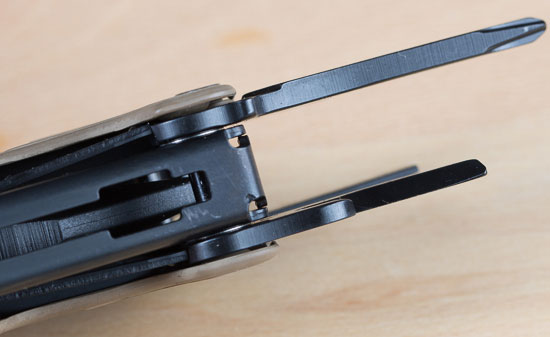 The liner locks deploy consistently and feel strong and reliable. Depressing them requires a slightly firmer touch than the ones on my other Leatherman tools, but not so much that it’s a nuisance. 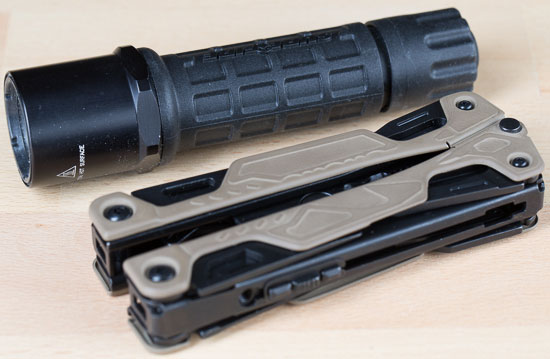 When closed the OHT is 4.5″ long. It seemed fitting to pair it with a SureFire G2 LED for scale.

A large MOLLE-compatible sheath is included with the OHT. In a pinch you can route the MOLLE attachment strap to create a belt loop, but it’s not ideal.

The OHT is described as a heavy-duty multi-tool for tactical users. I can’t speak to how well the multi-tool performs on the battlefield, but I’m about sold on Leatherman’s claims that it’s designed for hard and heavy use.

At first, the OHT was clumsy to open and close one-handed. It still can be at times, but for the most part it smoothed out once I developed the proper muscle memory. Or maybe the tool broke in a little bit, it’s hard to tell.

Overall, I am quite pleased with the One-Handed-Tool. In terms of features, the strengths and benefits of the quick-deploy pliers more than compensate for the short knife blade. It’s really hard to find an area where the OHT is lacking, but maybe time and more use will bring them to the surface.

One thing I’d like to see in the future is a more consumer-friendly uncoated stainless steel model. Maybe the hypothetical consumer model can feature one less screwdriver, a clamshell package blade (such as on the Wingman), a removable bit holder with an included double-sided bit that combines the functions of the two other separate screwdrivers (such as on the Wave), and a lengthened knife blade (made possible by the combined screwdrivers).

This is the tan model, and there’s also one with an all-black finish. There have been rumors that a plain stainless steel model is in the works. Street price for tan and black-finish OHTs is $70-80.

Update: Cabela’s prices went up, but you can often find better pricing via Amazon or other popular knife and multi-tool dealers.

The tool featured in this review was purchased at the full retail price from Cabela’s.