ToolGuyd > Hand Tools > EDC, Pocket, & Multitools > Leatherman Signal – a New Outdoors and Survivalist Multi-Tool
If you buy something through our links, ToolGuyd might earn an affiliate commission. 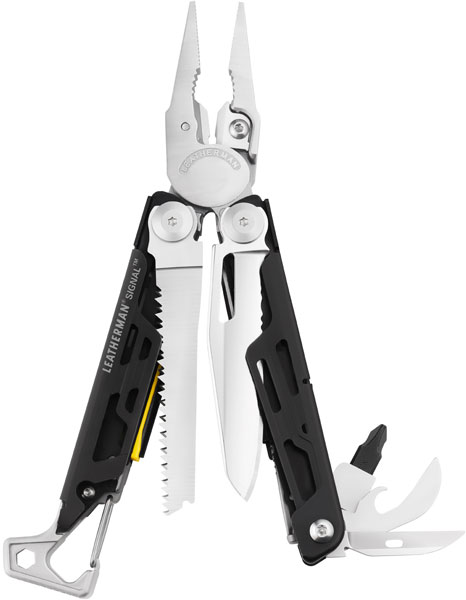 Leatherman has announced a new multi-tool, the Signal, which is designed for survivalists, outdoor adventurers and enthusiasts, and as described by Leatherman – those who participate in activities away from civilization.

A lot of outdoors activities requires that you carry your tools with you, which is why many outdoors enthusiasts already carry multi-tools. It looks like the Signal is a great minimalist multi-tool option for hikers, campers, geocachers, hunters, and others who might want to lighten their load.

Leatherman’s Sr. Product Manager, Jason Carpenter, said that they “spoke with a lot of professionally trained survivalists and if you’re lost, or need to stay overnight outdoors, the main things you want with you are fire, the appropriate tools, and a way to communicate without relying on technology”.

The Leatherman Signal multi-tool satisfies these requirements with a fire starter, whistle, and a complement of Leatherman-standard tools and functionality. 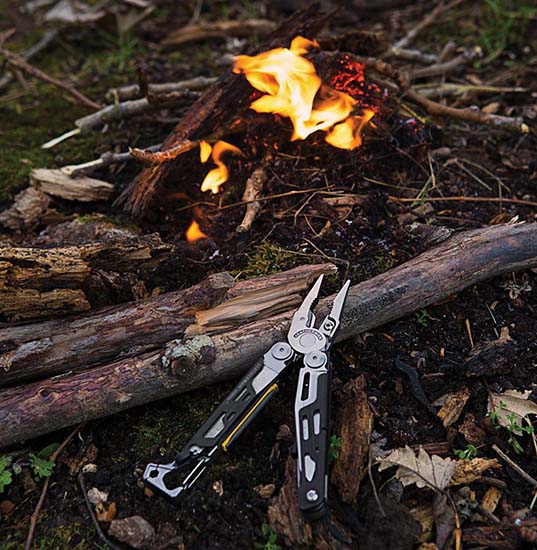 The hammer face seems to be another new feature not found on other mainstream Leatherman tools (there’s something similar on the MUT), and there’s also a shaped diamond-coated sharpener for maintaining the knife blade.

The Signal looks to be a decent new Leatherman entry into the world of EDC and survival tools. It looks like Leatherman took design cues from the MUT, their tactical/military-oriented tool, or possibly the Skeletool (review), as this is similarly pegged as a minimalist tool.

It might not be appealing to someone who already has a Wave (Review), Surge, or Super Tool, but the Signal could be a great multi-tool for backpackers or survivalists. As a big fan of Leatherman overall, I will likely add one to my collection.

One of the comment Leatherman made about the Signal stuck out to me: Lose yourself in the outdoors, but never get lost.

Lots of outdoors enthusiasts carry Leatherman multi-tools, but the Signal truly looks to be the first designed for this crowd. They are also targeting survivalists and for emergency preparedness applications.

I like the idea of the removable fire-starting ferro rod, although it would of course have to be removable to be struck, and it looks like the whistle and diamond sharpener are incorporated into the same accessory. Perhaps this piece will be available separately, either as a consumable or accessory that can be carried with any other multi-tool.

I think that the Signal will be popular with outdoorsy types, but some might even buy one for use as an urban emergency preparedness tool.