ToolGuyd > Hand Tools > EDC, Pocket, & Multitools > New Leatherman Surge Multi-Tool for 2013
If you buy something through our links, ToolGuyd might earn an affiliate commission. 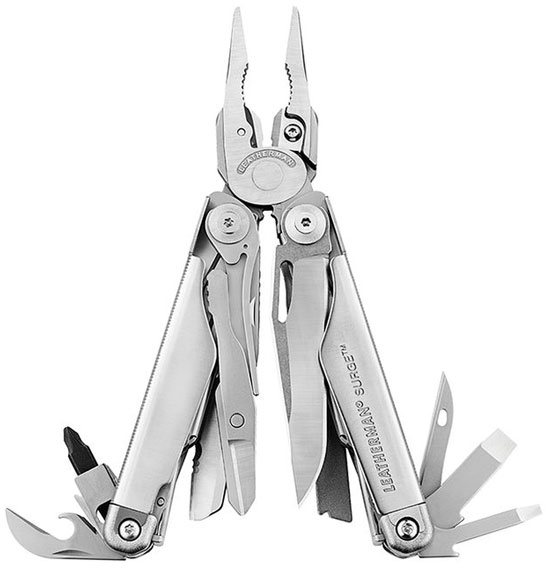 Related: Check out our multi-tool reviews and EDC gear previews.

Such a feature might not make a big difference to most users, but replaceable cutter blades are definitely a plus for those that tend to use their tools hard. I avoid using my non-replaceable-blade multi-tool pliers to cut hardened wire or steel cables because any damage would be permanent. On the other hand I definitely tend to push my Super Tool 300 harder than my other multi-tools. It puts me at ease to know that damaged cutters can be easily replaced for about $10.

Why the new Surge and not Leatherman’s other tools, such as the updated TTi? Possibly because they want to keep this feature in the heavy duty family, which includes the Super Tool 300, OHT (which we recently reviewed), and a couple of other larger tools.

Although… the Rebar (which we also reviewed), which Leatherman classifies as a full-size tool and not heavy-duty, also sports replaceable wire cutting blades. Maybe some of the other full-size tools will sport replaceable cutter blades in the future, but it doesn’t look like that will happen.

The Surge is also getting a new universal blade holder (blade exchanger) that is compatible with standard T-shank jig saw blades and other tools. It’s not a completely new design, but instead features a pressure bar that helps lock in accessories that are thinner than the saw blade and file included with every Surge.

Note: It appears that the new Surge model has NOT started shipping yet (as of August 25th, 2013). If you want to buy the new model, your best bet is to look for it locally or wait until online vendors update their product listings. Or, consider an alternative multi-tool, such as Wave or OHT.