ToolGuyd > Hand Tools > EDC, Pocket, & Multitools > Review: Leatherman Wave Multi-Tool
If you buy something through our links, ToolGuyd might earn an affiliate commission. 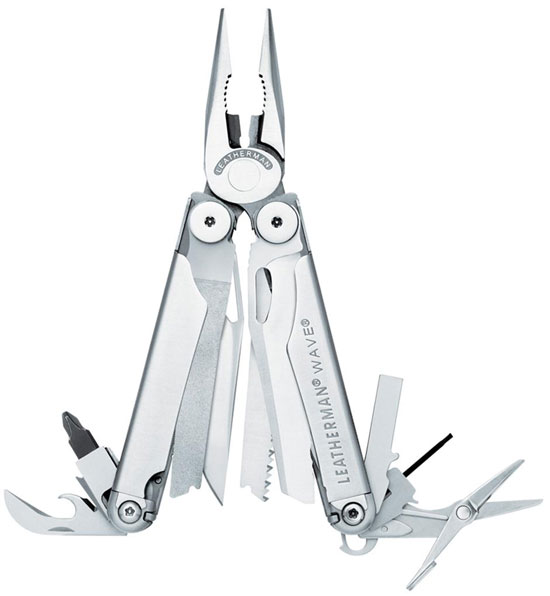 Every so often a reader emails in, asking for multi-tool recommendations.

The Wave is considered a full-size tool, similar to the Rebar and Sidekick multi-tools I previously reviewed. It measures just 4″ closed, which makes it a compact companion for tradesmen, hikers, office workers, hobbyists, DIYers, technicians, and all sorts of professional users alike.

The two knife blades, saw blade, and combination file can all be deployed and used without having to first open the handles or unfold the pliers. All four of these outside-tools lock into position via liner lock. The two knife blades open with one hand by means of a thumbhole, the saw and file require two hands.

If you’re looking for something else, check out our other Multi-Tool Reviews

I purchased this multi-tool over 6 years ago from Amazon, for $58.50. At the time I purchased 3 additional Waves and had them engraved for my best man and groomsmen. The flat brushed stainless steel handle takes engravings very well. My only regret was not having mine engraved with my wedding date as well.

Honestly, I don’t recall what my first impression of the Wave was like. But I do know that two weeks after I received it I purchased three Charge ALX gift sets – one each for my father and father-in-law, and one for myself.

Prior to buying the Wave, I had been using a Gerber Butterfly. The Butterfly isn’t a bad multi-tool, but it doesn’t come close to the Wave in terms of versatility or quality. 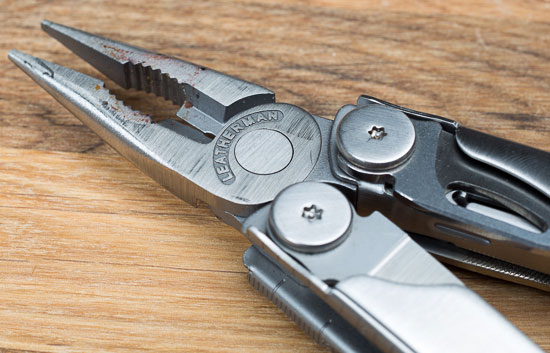 The pliers have needlenose tips with fine teeth, and a large-opening midsection with coarse teeth. They’re not spectacular, but they’re handy.

Don’t let the stains scare you – the pliers and other tools are actually fairly easy to clean. What happened is I used the pliers on a couple of green tree branches, but forgot to clean the jaws before I packed the pliers away. I rotated to another multi-tool and let the Wave sit for a while. Or at least that’s what I think happened. It doesn’t really bother me, so I’ll leave things as-is. 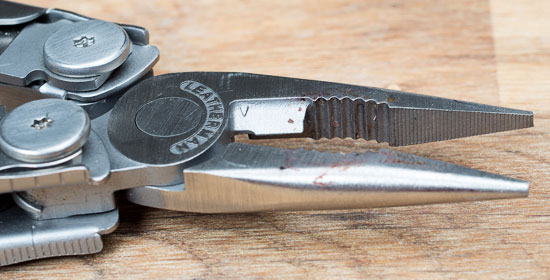 A little triangle points to the hard wire cutter so that you don’t ruin the soft wire cutting blades. The wire cutter blades are formed such that opposite sides cross each other in a scissors-like manner. They don’t cut wires very cleanly, but they get the job done.

Overall, I have been quite pleased with the pliers and wire cutter. I can’t say I have used the hard wire cutter very much.

The plain edge knife blade is still fairly sharp. I lightly honed the edge a couple of times, but can still see the original grind marks.

When I first bought the Wave, I didn’t know what to think about the knife blade’s 420HC stainless steel alloy. Nor did I care.

Leatherman uses 154CM on the higher-priced Charge ALX and S30V on the even more premium Charge TTi. 420HC is said to be harder than plain-Jane 420 stainless steel, thanks to its higher carbon content.

In the end, the knife blade holds an edge well, and is easily sharpened if or when needed.

Now, more than 6 years later, I care very much about steel alloys when purchasing new folding pocket knives or fixed blade knives. Would I buy a pocket knife with a blade made from 420HC stainless steel? Probably not. Would I buy another Leatherman multi-tool with knife blades made from this steel? Absolutely.

I find the serrated blade to be less useful than the plain edge blade, but it comes in handy for cutting rope, cloth, and similar materials.

Both knives are quick and easy to deploy single-handed. They can be folded out and used without having to first open the tool. This is important because it means less fumbling and quicker operation.

When I first started using the Wave, I didn’t like how both the plain edge blade and serrated blade can be deployed from the same spot on opposite sides of the tool. Flip the tool around, and the knife blades are both in perfect spots for one-handed thumb-deployment.

But… I eventually realized that the serrated blade has a few bumps at the top of its spine. Thus, once you’re more familiar with the tool, you can differentiate between plain edge and serrated blades by sight or feel.

The saw blade is nicely designed – for a multi-tool saw – although it can be hard to deploy if you have short fingernails. A thumbhole would be better, but out of place given the Wave’s design.

There are still some bits of sawdust stuck in the teeth. Maybe I cut a green tree branch halfway and then used the pliers to snap it… that could potentially explain why the pliers’ jaws are stained.

In theory the saw blade can be sharpened, but if you plan to use the saw frequently, the newest Leatherman Surge might be a more suitable multi-tool, as it features a universal T-shank blade holder. 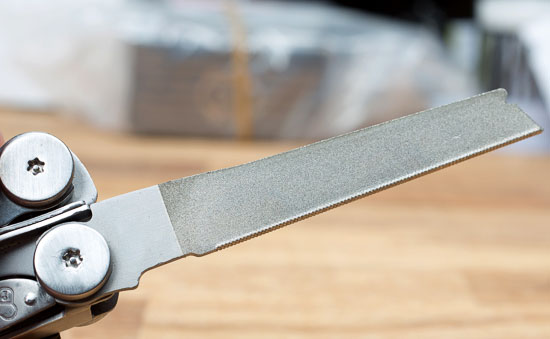 I can’t say I have ever used the files on any of my multi-tools very much, but it’s better to have and not need them, than to need and not have them.

Both sides of the file are well made. The fine-grit diamond file seems more useful for field sharpening tasks, and the wood/metal file more useful for fine filework, smoothing, beveling, and minor construction tweaks. It’s not a nail file. 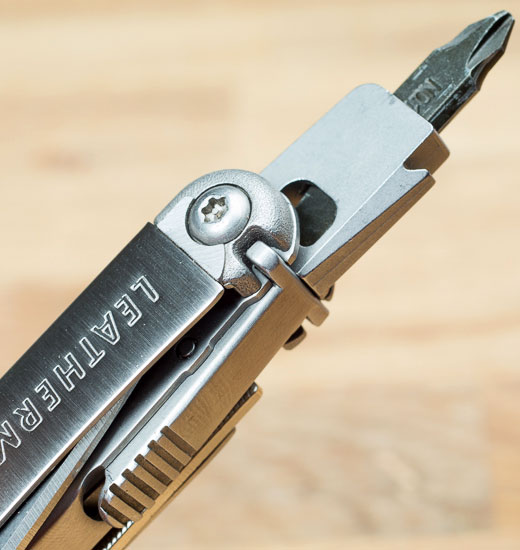 Every single tool, other than the two knives, saw, and file, lock into place when fully folded out. They can be unlocked by squeezing a spring-loaded lever. 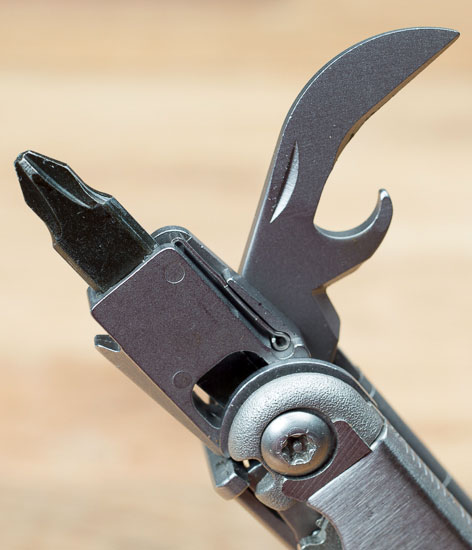 The screwdriver bit holder comes with a single double-sided bit with #1 and #2 combination Phillips and 3/16″ slotted tips. The bit holder is designed to hold low-profile 1/4″ hex bits. If you want to use other screwdriver bit sizes or styles, you can buy a bit assortment ($13 via Amazon) or 1/4″ adapter extension ($10 via Amazon).

I am actually quite fond of the removable bit holder. I have a complete bit assortment and 2 additional bit cards that came with other Leatherman multi-tools, and they have come in handy over the years. If I need a screwdriver bit style that Leatherman doesn’t offer, I pull out my 1/4″ adapter/extension and use it with standard 1″ insert bits. The extension can also be used with Leatherman’s low-profile bits.

The sheath that comes with the Wave has an elastic compartment that some people miss. You can fit a bit card in there with negligible added weight or bulk.

The can opener is another function that I rarely use, but the bottle opener comes in handy from time to time. If you look closely, there is a V-notch built into the can/bottle opener. Leatherman calls this a wire stripper, but I like to consider it a last resort wire stripper. It works, but for the size of wire I typically work with, using the scissors would probably yield better results. 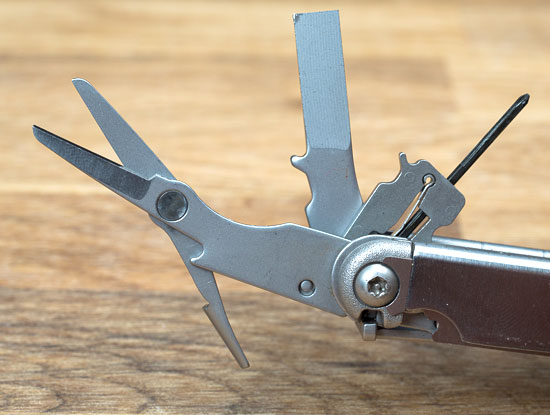 The scissors are unremarkable, but work reasonably well. Compared to the scissors on my first Gerber, they’re a dream to use.

The medium (or is it large?) slotted screwdriver is great for opening compartments designed for coins. I use it for light prying tasks as well, and it gets the job done. In the photo the corner looks damaged, but it’s not, it’s just a bit shiny. Okay, maybe I damaged it a little bit.

I only ever used the mini screwdriver two, maybe three times. Don’t be afraid of breaking it – replacements are available as part of a bit kit ($7.20 via Amazon). There is even a slot in the bit kit card holder, so you can carry a replacement with you.

I don’t recall if I ever used the Wave’s ruler or not, but in the past 6+ years I used the ruler on all my Leatherman tools maybe two or three times combined. Still, it’s good to have and takes up zero added space. 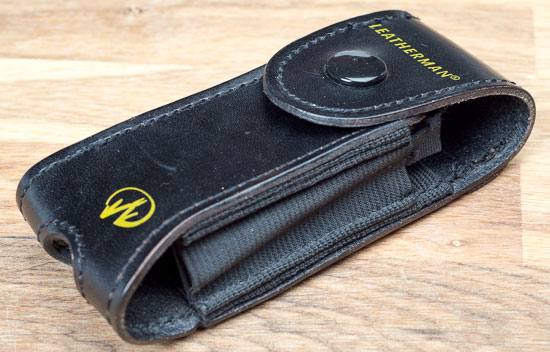 This is the sheath that came with my tool, but is not the one that is currently bundled with the Wave. It has two side pockets, a rear slot that fits a bit card, a belt loop, and button closure. It can carry the Wave closed, or open with the pliers down. 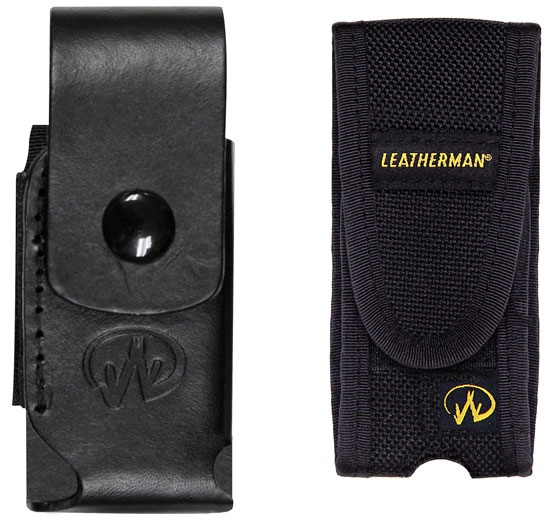 If you purchase a Wave now, there are two sheath options, depending on which bundle you purchase.

If you’re not happy with the sheath your Wave comes with, you can always order Leatherman’s universal sheath ($11 via Amazon), a Maxpedition sheath ($18 via Amazon), or a Skinth Shield. I have good experience with all of these sheath styles. 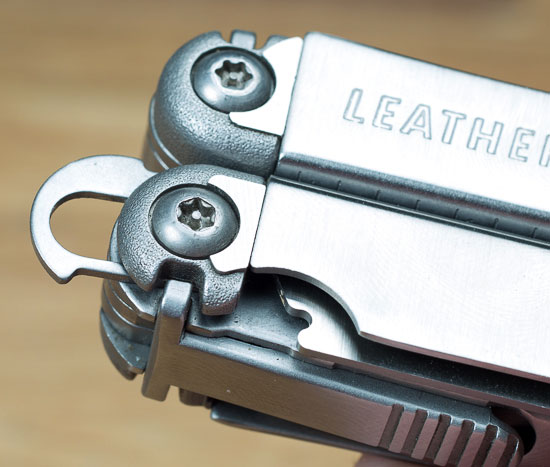 There’s a secret built-in lanyard loop that a lot of people seem to miss. I suppose it could come in handy, but I have never used it. 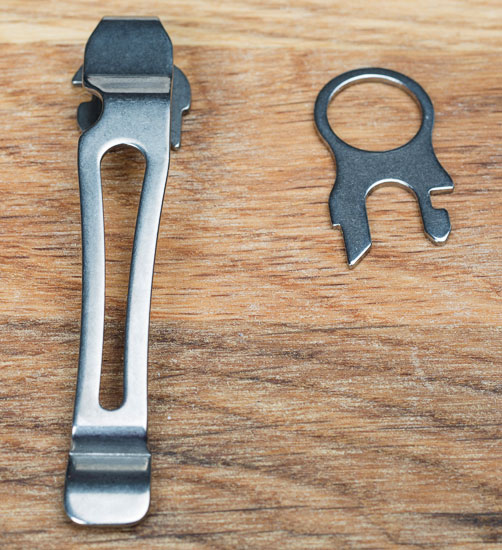 The belt clip and lanyard ring accessory pack is fairly inexpensive – $5.50 via Amazon. Although I prefer to carry my Wave in a sheath, I do use the optional mounting accessories on occasion. Both accessories lock in with the tool lock, and don’t impede the use of any of the tools or functions.

The Wave is a little larger and heavier than I like to clip to my pocket, but it’s not grossly uncomfortable. The clip is large enough to fit standard sized belts as well. 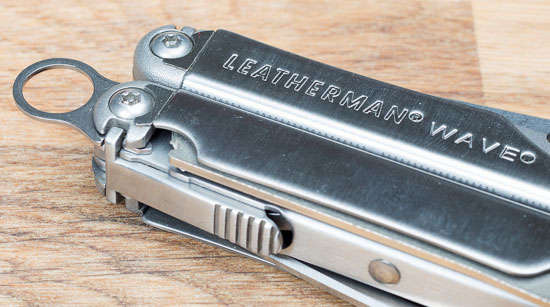 The optional lanyard ring is much sturdier than the built-in one. You can use it with paracord, beefy keyrings, a small carabiner, or other such accessories.

As with the belt clip, the ring can be quickly released with a squeeze of the locking lever and quick pull of the accessory.

If you think you might want to use other bit styles, a 40-bit assortment is widely available ($13 via Amazon). It slides easily into my leather, nylon, and 3rd party sheaths, but might not fit into the current Wave leather sheath. My bit kit cost a bit more than $13, and came with a small nylon sheath I never used.

There is a lot I like about the Wave, and little that I don’t. It is a very well designed mid-range multi-tool that packs a lot of functionality into a compact and unencumbering size.

The pliers, outer tools, inner tools, and blades open easily and cleanly with zero bunching up. I do wish the pliers’ cutters had replaceable blade inserts, but this feature seems to be reserved for Leatherman’s heavier duty tools.

If I could only keep one of my multi-tools, this Wave would be it.