ToolGuyd > Accessories > An LED Light Bulb With its Own Battery Backup
If you buy something through our links, ToolGuyd might earn an affiliate commission. 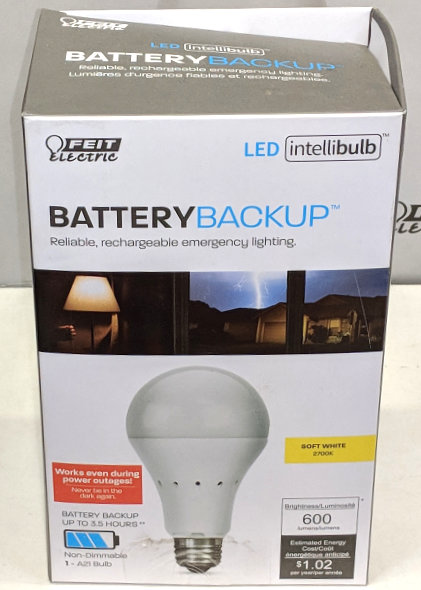 I was in Home Depot today and I spotted this strange sign – it said: “LED Intellibulb Battery Backup.” I understood three out of four words, but the concept wasn’t clicking in my head. Then I read the package and had an aha moment…”this is pretty cool!”

The next thought that struck me was the size and weight of the package… “wait, this thing the size of an A21 light bulb and it can run for up to 3.5 hours?” It didn’t feel any heavier than a normal LED light bulb — lighter in fact than some of the ones with a big metal heat sink.

After a little reading I figured out how the bulb works. It obviously needs to be in a light socket that is powered on to charge. When the power goes out, and only when the bulb is in a fixture that is still turned on, will the bulb run off the internal battery. It also will not provide the stated 600 Lumens at that point, but hopefully the output is still enough to navigate by.

Thinking about it, this makes sense that it operates in this fashion. It has to be in a closed circuit, or otherwise you couldn’t turn the thing off; it would just come on when you turn the light switch off or removed the bulb. (I wonder if your hand or body could close the circuit; pulling an Uncle Fester and lighting up a bulb in your mouth might be a good party trick – but do NOT try this at home!) 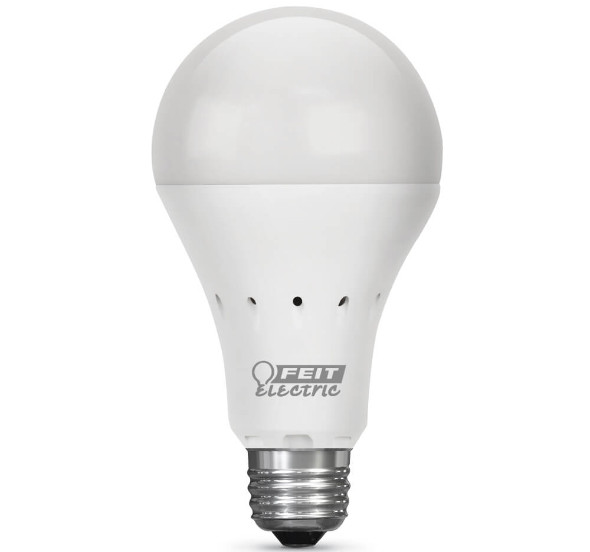 Here are the manufacturer’s specs: 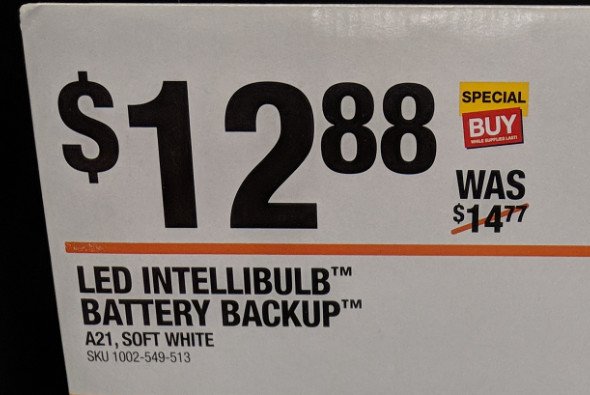 At one of my local Home Depots, this bulb is running for $13, but if you look at the website it’s full price at $15. Amazon has what appears to be the same bulb for $11.

I can definitely see the utility in this type of bulb in a few locations. For instance, our basement has no outside illumination, and so when the power goes out, you are in total darkness. I’ve been stuck down there before, feeling my way around in the dim light of a battery backup LED. A few of these bulbs placed in strategic places, like the stairway, might make navigating in a power outage easier.

I’m kinda curious about what’s inside this bulb. With a 13.7 year lifespan, what kind of battery can they be using? Based on the weight of the bulb, it can’t be a very large battery. For the light weight and long run time, it’s got to be Li-ion or LiPo, and given the strange shape they have to deal, with probably LiPo.

If we go down to 2W on battery, that means 7Wh. That’s approximately a 2000mAh, 3.7V LiPo battery, which is in the neighborhood of 20 grams. That makes sense, as it doesn’t seem to weigh much more than a normal LED bulb. I don’t know if I could tell if a 200 gram light bulb weighed an extra 20 grams.

Update: Hackaday did a teardown a few months back, detailing how the Feit battery backup light bulb works.