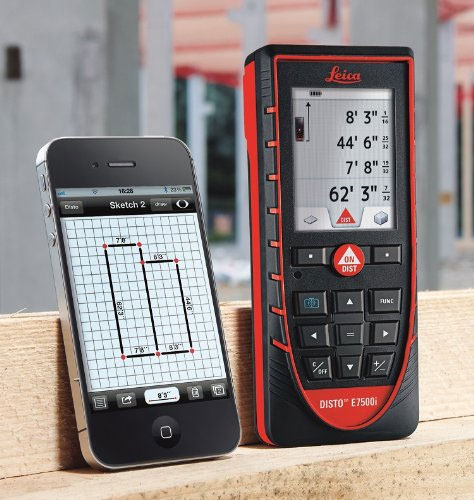 The Leica Disto E7500i is a new laser distance measuring tool that connects with your iPhone or iPad via Bluetooth to create simple sketches from transferred measurements. The Disto software also allows for dimensions to be added right on top of smartphone-captured photos.

Leica designed the E7500i to be easy to read, even outdoors and in poor lighting conditions. They also gave it a modern user interface said to be based off of recent smartphone trends and technologies.

On top of all that, it’s tough, dustproof, and reasonably waterproof with an IP65 rating (what’s this?). A pair of 2x 1.5V AA batteries powers the tool for up to 5000 measurements, less if you use Bluetooth a lot.

It looks like Leica Disto Sketch software is available for Apple iOS devices, as well as Android devices running V4.0 and up, but the E7500i might only be iOS compatible. Other Leica models, such as the D8 ($699 via Amazon) are confirmed to be Android-compatible.