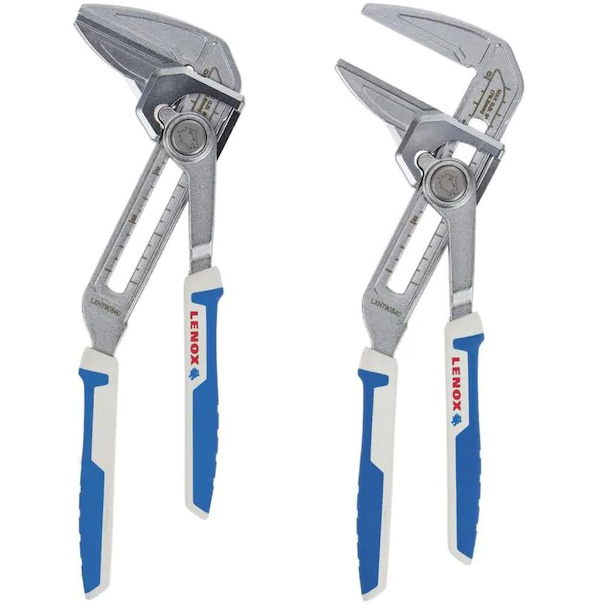 Lenox, a Stanley Black & Decker company, has come out with a new 10″ pliers wrench, capable of working with 3″ plumbing hardware.

The Lenox pliers wrench, LXHT90540, is designed with smooth jaws, which they say helps to provide for damage-free operation to a variety of plumbing fixtures and even flush valves.

The pliers wrench has a chrome finish, and a quick adjust mechanism that Lenox says is 2X faster than traditional groove joint pliers.

To be frank, I wasn’t very fond of Irwin’s pliers wrench-style tool, despite my affinity for Knipex’s original Pliers Wrench. You can read more about my early experiences with the Irwin pliers here. Basically, I felt that the jaw adjustment settings weren’t perfectly tuned for hex fasteners, one of the types of things I occasionally use my Knipex Pliers Wrench on without any issue.

With this Lenox pliers wrench – and can they even call it a pliers wrench, I thought this was a Knipex trademark or something – it’s designed for plumbing fixtures, and so it has a huge jaw opening width adjustment range. The jaws are also quite long, seemingly making them well suited for plumbing applications.

I’m a bit surprised that the new Lenox pliers wrench are priced at $40, and with no mention of where they’re made, I assume they’re made overseas at the same place as the Irwin adjustable pliers they resemble. That’s not a bad thing, and the unique nature of the jaw design does look to warrant premium pricing.

Is there anything on the market right now like this, aside from traditional tongue and groove and adjustable pliers?