ToolGuyd > Power Tools > Grinders & Sanders > I Woke up to Lower Prices on Select Festool Sanders?!
If you buy something through our links, ToolGuyd might earn an affiliate commission.

It’s April 1st, 2020, a fresh new month. Typically, this is the day when Festool price increases go into effect, but that’s been postponed this year due to the effects the pandemic and social distancing guidelines are having on businesses and users’ wallets.

I checked my Amazon cart as I always do in the morning. It’s full of items I plan to buy in the near future or if/when deal pricing is favorable enough – and saw that the Festool sander I’ve been considering has dropped in price.

A sale on Festool tools?!

Wait, no, it’s real. The two Festool sanders I will eventually choose between are both discounted, from $270 to $259. What’s going on here, if this isn’t a joke? 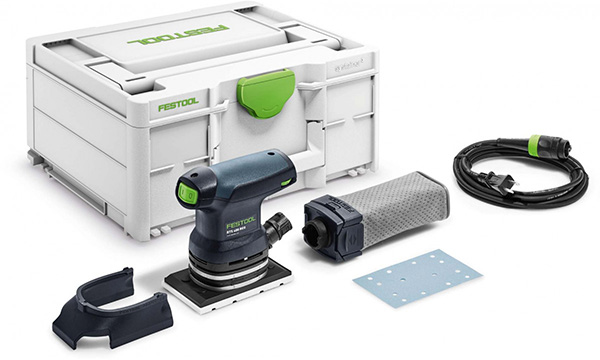 OH, I think I see what’s going on. The previous/existing SKUs are now on sale because Festool’s Systainer 3 modular tool boxes are finally hitting the market, or at least that’s my theory.

That would make sense to me. If there are new sander kits featuring the updated Systainer 3 tool boxes, why would anyone pay the same price for the other/older SKUs that are kitted with the previous Systainer tool box models? Or maybe this is to avoid confusion that could come from retailers having nearly identical product listings and at the same price point?

Either way, it looks to me that the older kits are being discounted to make room for the new ones that are bundled with updated T-Loc Systainer 3 tool boxes.

An $11 discount doesn’t seem like a lot, but when buying anything Festool related, any savings can help. I’m not going to bite just yet, but I found this to be worth mentioning.

I can’t find any other notable examples of discounted Festool tool kits, which means either I’m wrong in my theory about these price changes being prompted by the included Systainer tool boxes – (nearly?) every Festool tool comes packaged with one – or Festool USA is introducing updated tool packages and SKUs on a rolling base.

In case of the latter, perhaps these two sanders are discounted this month to help drive sales of remainder inventory, and perhaps other tools and SKUs will be discounted in the future until all of the older inventory with previous Systainer models are sold.

Amazon doesn’t have much inventory of the new sanders, and they say “more is on the way,” but I don’t know how accurate that is.

Update: The rectangular sander has already sold out on Amazon, and I can’t find the same $259 pricing elsewhere. I guess other people saw the same price alerts I came across this morning. I found that Acme Tools also has the triangular-pad sander for $259.

Update 2: Here are some other SKUs that appear to be discounted on Amazon:

Are there any others that we missed?