ToolGuyd > DealGuyd > My Local Lowe’s Has Some Holiday 2019 Tool Deals on Display
If you buy something through our links, ToolGuyd might earn an affiliate commission.

Over at my nearest Lowe’s store, they don’t yet have the new Craftsman mechanics tool set and VersaStack tool box bundle that we recently posted about. But, they did have what looked to be some holiday season promo displays.

Oh, and Bosch impact-rated screwdriver bits were on clearance – except for the Phillips #2 pack I bought for review comparison purposes. I already have a bulk box of bits for personal use, but needed a smaller quantity for photo purposes. I mention this because a reader noticed the same recently and emailed me about it, asking if Lowe’s has split ties with Bosch.

Anyway, back onto the holiday season displays. These are holiday season tool promo displays, right? Christmas and holiday decorations are already on display at the Home Depot and Lowe’s locations I visited. Given the late-October timing and the nature of the tools on display, these are almost certainly holiday season promos.

Lowe’s can be unpredictable with their holiday promo displays, which is why I was pleased to see an early showing.

But, Lowe’s also has frustrating pricing. 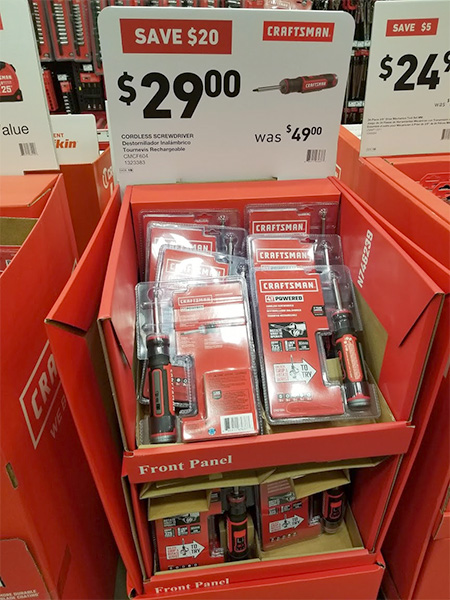 Craftsman has not yet sent a review sample of their new gyroscopic screwdriver, and so I figured I’d buy one now that I’ve seen it available. Craftsman told me the MSRP is $39. Lowe’s signage says “was $49, now $29, save $20.” So, I brought one to the register. It rang up at $49.

I was able to get a manager override, but it did take a few minutes. This happened last year too, also with some Craftsman tools I bought for testing purposes. The front end seemed to be understaffed for a weekend day.

I hate buying any tools from the “raceway” promo displays this time of year, since their prices almost always drop in November.

In past years, tools like this would be hidden away at my then-local Lowe’s store until the first price reductions went into effect. That bugged me too. I’d have to visit Lowe’s stores multiple times until their holiday displays finally went up. Seeing holiday tool promos on the sales floor by the third week of October? That seems highly unusual to me, but it’s welcome – with a catch.

A few years ago, I would try to order seasonal Lowe’s new seasonal Kobalt tools for review, with in-store pickup, and my orders would be cancelled because the tools were in-stock, but not on display yet. I remember being irked that when Lowe’s put their tool promos on display, the was pricing claims were technically untrue. If I couldn’t buy something at the “was” pricing, and it was the “new low price” as soon as I saw a tool available for sale, is that honest marketing?

But in hindsight, I’m more annoyed by having to revisit a local store for price adjustments, or worse – paying much more than needed.

How happy is a customer going to be, realizing that the tool they bought for $49 is going to be reduced to $29?

And if Craftsman tells me the MSRP is $39, how is the “was” pricing said to be $49? This hurts my head. But hey, at least they are selling it at $49. That’s unfortunate for anyone that that hasn’t learned to expect a mid to late November price drop, but at least it’s honest?

I can’t tell if the price discrepancy at my store was due to the wrong signage used, or if there’s a different reason.

What kinds of tools were on sale? There were some Kobalt tool displays, a LOT of Craftsman tool promos, a Lufkin tape measure bundle, some Dewalt accessories, and what I would consider “good, better, best” displays of Irwin, Craftsman, and Dewalt power tool accessories. Oh, and there were also some Lenox power tool accessory packs. I remember seeing a Bosch laser distance measuring tool display.

I wish there was a little more variety to the tool brands. But, I guess Lowe’s knows what they’re doing.

I’ll take another look in a couple of weeks, most likely taking a trip to my favorite Lowe’s location ~50 minutes from here.

Right now, it’s worth scoping out holiday deals, but it’s hard to know which are worth buying. Who likes spending more on tools than they have to? I seem to forget this lesson every few years, inevitably returning to customer service for hefty price adjustments.

What I’m trying to say is that I wish that all these promo tool displays were simply priced as they will be come mid or late November. Some of them are, others aren’t, and it’s always a gamble trying to figure this all out, even for me. It’s like a bad game of “The Price is Right.” Home Depot does the same, but their price adjustments are far more predictable.

If you have been to Lowe’s recently, does your store have their holiday promos on the sales floor yet?

In my experience, holiday tool promos usually emerge in waves, with the first setup taking place shortly after Halloween, and then more displays hit the floor for Black Friday. Home Depot also has had their “Pro Black Friday” event in mid-November.

Where are Amazon and Walmart Getting their Milwaukee Tool Inventory From??

What New Tools Did You Buy from “Black/Cyber/Holiday 2018” Deals?