ToolGuyd > Power Tools > Power Tool Accessories > Lowe’s is Clearing Out Bosch Screwdriver Bits at Some (All??) Stores
If you buy something through our links, ToolGuyd might earn an affiliate commission. 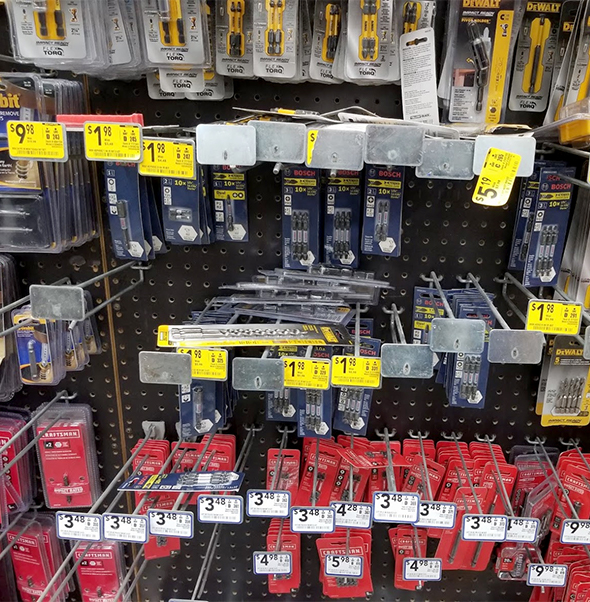 Jeff wrote in earlier this month, telling us that the selection of Bosch screwdriver bits at Lowe’s looked to be dwindling.

Any idea what’s going on with Bosch screwdriver bits at Lowes? I noticed as of a couple months ago the stock was dwindling. The shelf at my store was practically bare today to the point I asked the clerk if they are discontinuing selling them. Of course, he had nothing to add other than what you’d expect from a Lowes clerk.

Went to the website to order and even the website was practically empty of Bosch. The only 3 pack available, which was the way most were sold, was on clearance. There, of course, was a massive display of DeWalt and, ugh, Craftsman. Looks like I’m going to have to go to my back-up of Milwaukee as Home Depot or buy from the usual suspects online.

I saw the same at my local Lowe’s this weekend, with a photo of the display shown above. But of course the Phillips #2 bits I need for an upcoming story were full priced. 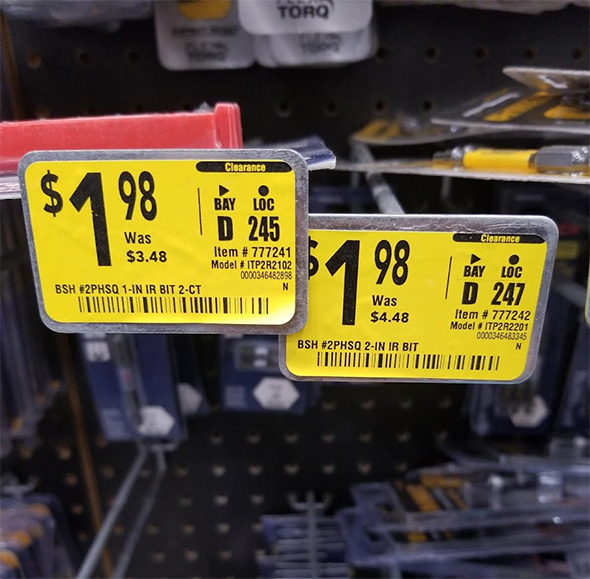 Some of the price tag labels were stripped away, but the others were yellow with “clearance” markings.

It’s unclear what’s going on. Have you seen the same at your local Lowe’s stores? Are the Bosch screwdriver bits disappearing from your store too?

If Lowe’s is clearancing out the Bosch individual bit size packages, what do you think will take their place? My Lowe’s had Dewalt Tough Grip, Dewalt Flex Torq, and Craftsman screwdriver bits. Maybe Irwin, another Stanley Black & Decker brand, will fill in the space?

Personally, I purchase my Bosch screwdriver bits online. I have picked up individual packs of screwdriver bits (other brands, not Bosch) from Home Depot, but not from Lowe’s. Still, this doesn’t seem like good news to me. Part of me is holding onto hope that maybe Bosch is simply updating the packaging of their bits, but if that was the case, the new packs would simply hang on the same pegs as the old ones.

To me, it looks like Lowe’s is changing suppliers. But to which one? Why?

Thank you Jeff for the heads-up!

Reader Question: Is Everything Okay at Lee Valley?