Lowes held a media event in NYC this week, bringing attention to quite a few new tools that are being released under their exclusive Kobalt brand. We attended the event, and previewed many of the new hand and power tools.

We will be looking at many of the new tools in detail, reviewing some of them as well, but for the time being here’s a lightly detailed preview to keep you up to date.

Cordless NiCad or Li-ion, Your Choice

Both NiCad and Li-ion kits will be available, with the tools differing slightly. The NiCad tools sacrifice advanced features in order to achieve a lower price point, but build quality and performance was still nice. The tools in the Li-ion kit have more features, better specs, more complex components, and a dual-chemistry charger.

If you’re thinking that the NiCad batteries look grossly oversized, you’re right – they’re huge. BUT they don’t weigh as much as it looks like they do, and the tools are surprisingly well balanced.

A separate premium-looking Li-ion drill/driver is also available, and looks to to be a competitive mid-to-high-end option. An add-on impact wrench is also out now, and I’m told that an impact driver is on the way.

When asked about whether the cordless tools from the kits will be available for purchase separately as bare tools, I was told that plans to do so aren’t on the table, but it has not been ruled out.

There were quite a few things I liked about these saws. The 12-amp reciprocating saw features a tool-free blade change, 360° quick-change rotating head, 1-1/8″ stroke length, 12-foot cord with live wire indicator on the tool itself, orbital action, and tool-free shoe adjustment. The recip. saw is available now and is priced at $94.

The 15-amp circular saw features a magnesium shoe and blade guard, 12-foot cord with live wire indicator on the tool itself as with the recip. saw, 2-3/8″ 90° cutting depth, 1-13/16″ 45° cutting depth, and on-board blade tool change. The circular saw is also available for $94. 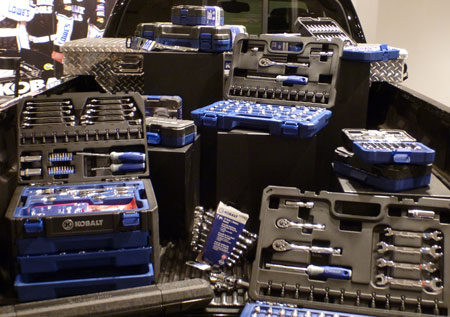 As we briefly discussed, Kobalt recently overhauled their entire mechanics’ tool line. The new wrenches, ratchets, sockets, and other mechanics tools are already in stores nationwide. We’ve been using and passing around a few of these new tools that we purchased a few months back, and… they’re actually pretty nice.

Lowes also introduced the new Kobalt Double Drive screwdriver at the event. The Double Drive is not meant for heavy duty professional use, but it seems to hold up well and is actually a lot of fun to use. We liked it so much that were already set up a Double Drive or Lowes gift card giveaway!

The Kobalt Multi-Drive wrench was also showcased at the event, but I’m not too fond of it. When I discussed my displeasure with the tool’s design, it was explained that the tool is more intended for homeowners or DIYers that don’t already have full wrench and socket sets. The question that still hangs in my mind is: how many DIYers regularly come across 12pt, e-Torx, or spine fasteners?!

There’s also a new Kobalt tool box with built-in Zerust corrosion inhibitors. I’m more a fan of sealed tool cases or drop-in desiccator cartridges, but the Kobalt tool box looked like a nice portable kit box. The Zerust might sweeten the deal for some, and anyone not interested can just ignore that feature.

Lowes and Kobalt describe the new power tools as providing professional-grade power and as the next generation of tough tools. Although initially skeptical, I have a new understanding of what they’re going for, and for the most part I really liked what I saw.

Disclosure: Lowes set us up with a hotel room for the night and sent us home with a bag, screwdriver, and flashlight.