ToolGuyd > Hand Tools > Layout & Measuring > Lufkin Black Widow Tape Measures, with Green on Black Markings
If you buy something through our links, ToolGuyd might earn an affiliate commission. 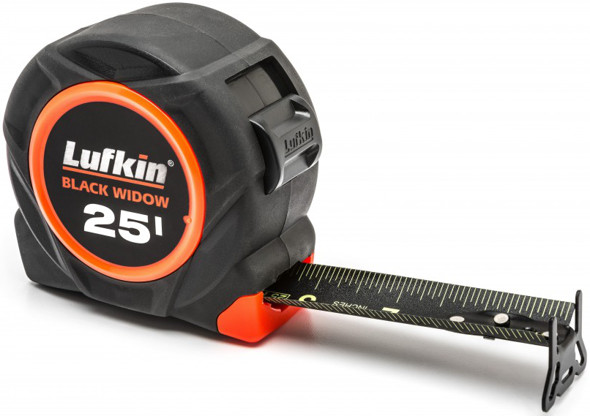 I was browsing my Instagram feed and I spotted this post from @toolaholic about Lufkin’s Black Widow 25′ tape measure. It jogged my memory back to when I talked to an Apex Tool Rep at the last Acme Tool in-store event. I had meant to post about the tape then, but I forgot to write about it because I was too focused on the killer track saw deal I scored.

What makes this tape standout from the very many others on the market is its unique blade color scheme. Rather than the standard black on yellow markings, the markings are a “Hi-Viz” green on a black background, to improve contrast and low-light readability.

The 1-3/16″ wide blade has markings in increments of 1/16″ on both the front and back side. The dual-end hook is attached to the blade with four rivets and makes it easy to use either side of the tape. The front side has horizontal markings while the back has a vertical scale. The blade has a standout of 10′ and a matte nylon coating to reduce glare.

And here’s the back side. The entire 25′ tape is marked, front and back.

Above you can see a standard black on yellow bladed tape measure next to the Black Widow. It’s not the greatest photo, but you can see how the “Hi-Viz” green markings really stand out in the store lighting. I didn’t really have a chance to try the tape out in low lighting, but that’s where the new blades colors are really supposed to “shine.”

Lufkin really didn’t really include any other bells and whistles on this tape. It has an unimpressive 10′ standout, compared to some more recent 25′ tape measures with a 13′ standout. And while I personally don’t look at blade standout in tape measures, I’ve been told by many contractors that a long standout is one of the first things they look for.

What intrigued me was the color scheme and the clarity of the markings. It reminded me of an old VT terminal with the green on black display. I remember reading somewhere that green on black was used because it was the highest contrast, but now I see that may have just been a justification for using the cheaper green phosphor CRTs.

Lately I’ve seen way too many tape measures suffer from dull looking yellow blades and muddy markings. So seeing a tape that’s designed around making the measurement easier to read was enough for me to want to post about it.

I still wonder about the long term readability of this color scheme. It does have a nylon coating to prevent the markings from rubbing off, but will the black stay black or will the matte finish attract dirt and make the markings harder to read?

Do you think the green on black is easier to read, or do you prefer the standard black on yellow?