ToolGuyd > News > New MakerBot and Home Depot 3D Printing Retail Partnership
If you buy something through our links, ToolGuyd might earn an affiliate commission. 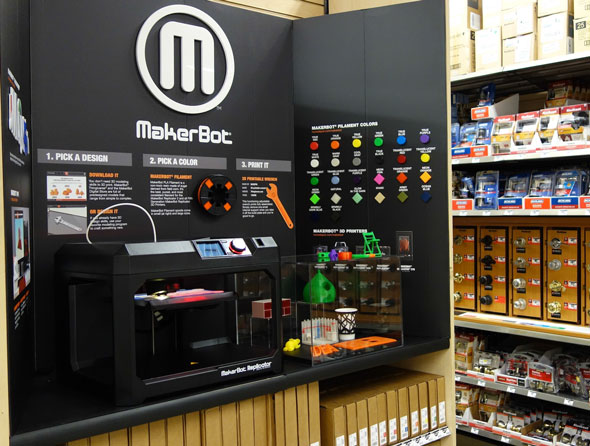 At participating stores, there will be specially designed kiosks where trained MakerBot retail staff will provide 3D printing demonstrations and will offer printed samples for customers to take home.

A couple of months ago, a marketing research rep from Craftsman and Sears called me up to pick my brain about a few things. He kept circling back to ideas about in-store demonstrations and displays that centered around 3D printing and CNC products. It looks like Home Depot beat Sears to the punch.

Honestly, I don’t think this is the direction retail stores need to be heading. Instead of focusing on selling 3D printers, they should focus on selling 3D printing services, similar to what UPS is testing out at 5 retail locations.

Pundits like to tell how consumer desktop 3D printers are getting better and better, and how they’re getting cheaper and more affordable, but things aren’t quite to the point where you can get a “plug and play” printer at widely affordable prices.

A few weeks ago I purchased a Printrbot Simple Metal 3D printer. I liked the design and construction, but it failed to produce a usable print. A lot of tinkering and tweaking with settings and adjustments, and it still wouldn’t output anything usable. I ultimately sent it back.

Judging from what I have seen, less expensive 3D printers can produce decent quality, but users should be prepared to become 3D printing enthusiasts in order to make that happen. There seem to be few – if any – sub-$1000 3D printers that require as little attention as 3D printer sellers would have you believe.

MakerBot, under new Stratasys ownership, has made their newest Replicator printers easier to use than ever, but they’re also more expensive than ever. The 2014 edition of the Replicator is priced at $2900. Even the “mini” model, which is smaller and with lesser specs, is nearly $1400.

If my local Home Depot offered 3D printing services, such as with an internet-connected vending-machine-sized help-yourself display, that’s something I would definitely take advantage of.

Solar Eclipse? A Reminder to be Safe!