ToolGuyd > Power Tools > Cordless > New Makita 18V Bluetooth Radio
If you buy something through our links, ToolGuyd might earn an affiliate commission. 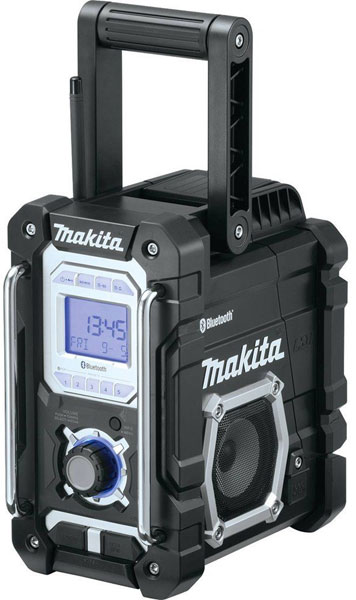 We have seen a lot of new Bluetooth radios, speakers, and adapters from power tool brands in recent months. Makita has decided to join the fray with their new 18V XRM04B speaker.

Here’s a list of recent Bluetooth radios and speakers:

Users like Bluetooth-enabled radios because it allows them to stream music, podcasts, and other audio from their smartphones and devices, without having to physically connected the devices.

The new Makita XRM04B looks a lot like the MakitaLXRM03B radio we reviewed (and really liked), but with new Bluetooth connectivity. There’s also no mention of an iPhone dock, which means Makita might have nixed it on this model.

Other than the added Bluetooth connectivity and presumed absence of an iPhone dock, many of the features seem to be carried over from the preceding model.

The new Makita 18V Bluetooth radio is listed at $280 on Amazon, which is nearly DOUBLE the release price and more than double the current street price of $130-$138 of the previous model.

I seriously hope that the $280 list price on Amazon is inflated, and that it will drop a bit once the radio is released.

If the retail price of Makita’s new Bluetooth radio is in fact $280, that would make it the most expensive jobsite radio currently on the market, at least among the many models I am familiar with. At that price, the Makita radio would eclipse Milwaukee’s premium Bluetooth radio, which is priced at $229.

It’s good to see Makita finally jumping onto the Bluetooth bandwagon as most of their competitors had already done, but at the current preorder list price of nearly $300, its hard to find much appeal in the new model. If Makita had drastically changed up the design, then maybe I would feel differently. But given from what I could see and tell, this is merely another update of their previous design.

Update: Price has been updated to ~$160, which is still quite pricey, but a LOT better than the original “list” price of $280.