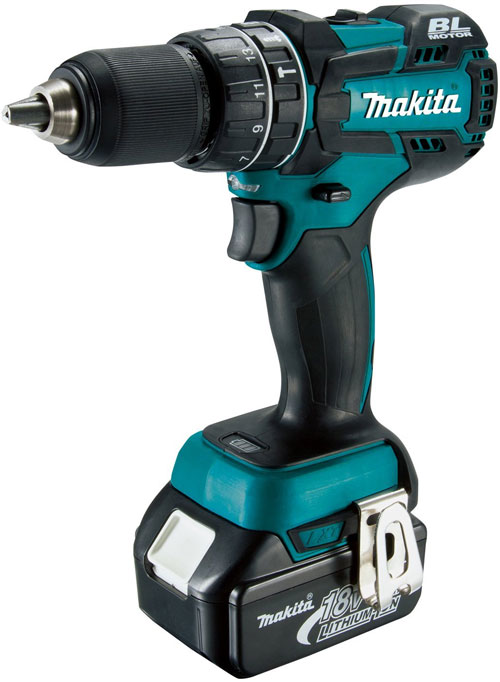 In late 2013, we discussed some of the new Makita cordless tools that would be coming out in 2014. New details about the new Makita XPH06 18V LXT brushless hammer drill have just become available, so we figured now would be a good time to take a closer look at it.

Compared to competing cordless brushless hammer drills, the XPH06 is not the lightest, most compact, most powerful, fastest, or most featured. However, it might offer enough to possibly keep dedicated Makita 18V LXT users from jumping to other brands’ 18V-class Li-ion compact and premium hammer drills.

Hopefully Makita has made one more change to the design and added in some better thermal protection. If you recall, the LXPH05 brushless hammer drill’s motor smoked up and damaged itself when pushed beyond its limits.

At the time Makita insisted that there was nothing wrong with the LXPH05 design and that it would only heat up and start smoking excessively when using improperly or abused.

Since then, we have heard a few more isolated reports from tradesmen and professional users whose Makita 18V drills started smoking up during use, but there weren’t any widespread complaints. Other brands’ tools can heat up to where they start smoking as well, but typically shut down before major damage is caused to motor windings.

Overall, the new 18V XPH06 looks to offer a reasonable compromise between power and size. It’s still a compact hammer drill, and is a lot more powerful than the LXPH05 it is presumably intended to replace.

Who Should Buy This Tool?

Makita 18V users who are looking for a compact brushless hammer drill. The XPH06 looks to be an upgrade over the LXPH05.

Who Should Not Buy This Tool?

Anyone not tethered to Makita’s 18V platform who are looking for the fastest, most compact, or most powerful brushless hammer drill, as the XPH06 does not best competing models in any of these areas. Makita also has yet to release 4.0Ah batteries in the USA, and doesn’t plan to for at least another 6 months, which means runtime probably won’t be as good as with competing models either.