ToolGuyd > Power Tools > Cordless > A First Look at the new Makita 18V Brushless Impact Driver
If you buy something through our links, ToolGuyd might earn an affiliate commission. 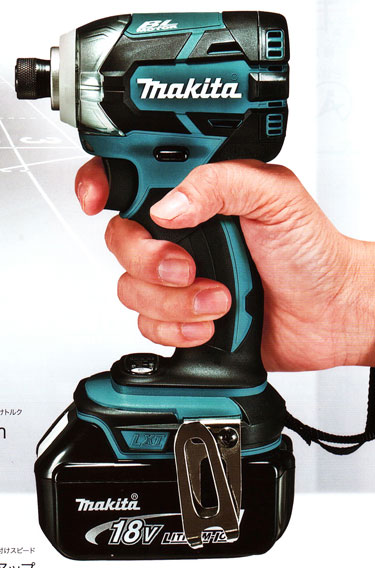 Over in Japan, Makita announced that they have come out with a new 18V LXT brushless impact driver, model TD148D. There is also a 14.4V version, model TD137D. The new cordless impact driver is said to offer high performance in an extremely small and compact package.

This is also the first product Makita has advertised equipped with their 5.0Ah BL1850 Li-ion battery. A promotional flyer for the impact driver shows runtime scales for 3.0Ah, 4.0Ah, and 5.0Ah battery packs.

As a reminder, Makita’s 18V BL1840 LXT 4.0Ah Li-ion battery pack is available internationally but not yet in the USA. The 4.0Ah battery pack is expected to be released in the USA in about 6-months from now, in the summer of 2014. 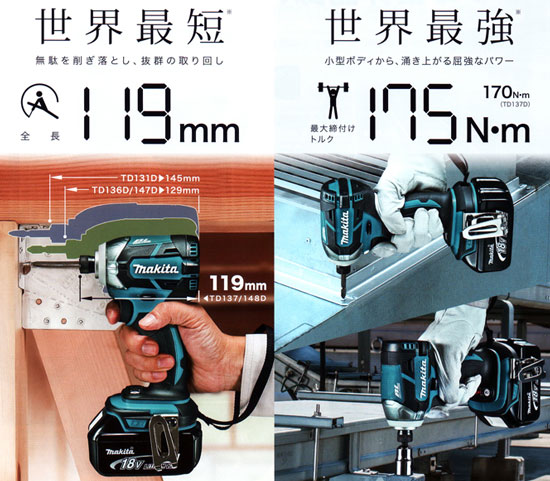 When we compared the LXDT06 specs to those of other 18V-class impact drivers, it looked to be shortest in class. It looks like the new impact driver will inherit that title.

The new brushless impact is said to deliver a maximum torque of 175 Nm, which is about 1550 in-lbs. 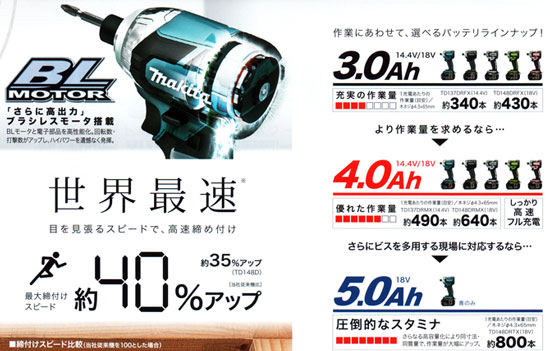 Additionally, Makita says that the TD148D is 35% faster than their previous leading 18V-class impact driver.

As with the LXDT06, the TD148D features 3 speed and torque settings. The new impact might also have a similar quick-shift mechanism.

There is no word as to whether the new 18V impact driver will be released in the USA.

We asked Makita USA whether there is a USA release estimate for the 5.0Ah battery pack and whether there would be a USA/North American version of the impact driver and were told that there is “no new information regarding additional battery releases at this time.”