ToolGuyd > Power Tools > Cordless > Deal of the Day: Makita 18V Drill, Impact, Brushless Grinder Kit, for $199 (12/15/16)
If you buy something through our links, ToolGuyd might earn an affiliate commission. 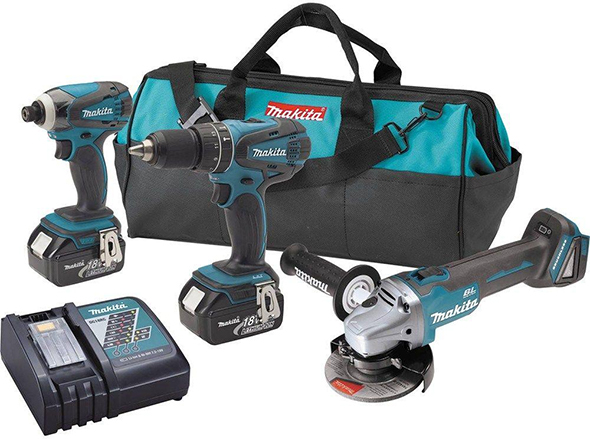 The hammer drill is Makita’s previous $99 special (or close enough), and the impact too. The grinder is their brushless model that came out 2 years ago, which retails for $129 as a bare tool.

The batteries are Makita’s older 18V 3.0Ah packs, which don’t come with built-in battery fuel gauge, or at least according to the BL1830 model number given by the Home Depot listing.

I’d say that the grinder is the star of the show. If you’re looking for a new brushless cordless grinder, and could also use a new compact hammer drill or impact driver, this kit looks to be a good value.

In regard to price history, during last year’s HD Makita deal of the day, I wrote this:

If you ask me, Amazon’s XT324 combo is still a better deal – it gives you the same drill and impact driver kit, plus an angle grinder for $249. But that’s if you need or want the brushless grinder, which retails for $113-$129 as a bare tool.

The kit is currently $240 at Amazon. A reader mentioned last year around this time that at his local HD the same kit was marked down to $229.

With all that in mind, it seems that you save $30 to $40 with this deal of the day, compared to the street price. Home Depot says that the deal of the day saves you $50 off the “was” price. Looking around, the list price does look to be $249, but the street price is around $240 at most dealers, Amazon included.

Long story short, this looks to be a good deal for what you get.

Note: Only the grinder has a brushless motor.

Amazon’s day after Black Friday special on the hammer drill and impact driver kit has also returned, but doesn’t look to be a limited time deal. It’s also a good deal, but I’d be a little annoyed if I rushed to buy it on 11/26. Of course, the current pricing could be a limited time reduction to sell off a couple of kits left over after the earlier deal of the day promo.

A Tour of the Metabo Power Tool Factory in Germany