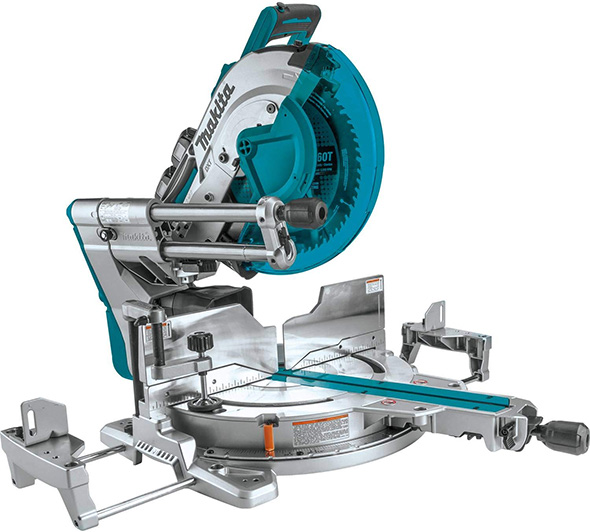 Apparently, Makita has come out with two new 18V X2 brushless 12″ sliding miter saws. I say apparently because there were no official announcements, press releases, or media fanfare of any kind.

There are two new saws, the XSL07, and the XSL08. The two new Makita 18V X2 cordless 12″ miter saws look identical to each other, except for one key difference. The XSL08 is “AWS-capable” and the XSL07 is not.

The XSL08 is AWS-capable, and requires an optional transmitter (~$80 via Amazon) if you want to take advantage of that capability.

Depending on the retailer, the XSL08 saw is $50-$90 more than the XSL07 saw if you buy the bare tool, and $70-$120 more if you buy the kit, and it does not include the AWS transmitter. What this means is that AWS compatibility, if you already own an AWS-equipped vacuum, adds at least $130 to the cost over the non-AWS version.

The new saws feature in-front bevel lock, “Automatic Speed Change” technology that adjusts cutting torque and speed during cutting for optimal performance, and a unique steel rail sliding system that creates a smaller footprint and allows for operation flush against a wall.

There are two dust collection ports, which Makita says provides excellent dust extraction performance, and a built-in laser for line-of-cut indication. Micro-adjustments allow for the laser to indicate “left-of-blade” or “right-of-blade” cutting.

There wasn’t any press release or other official announcement, and so we’re not sure what the “official” pricing is. Following are the “street pricing” from our typical go-to online retailers. Amazon also has listings for the new miter saws, but their pricing is higher, presumably due to the shipping fees being built in.

The kit comes with a dual-port charger and (2) 5.0Ah batteries.

It looks like the new Makita 12″ cordless miter saws are similar to their 10″ saws, which also have dual vertical rail-style sliding mechanisms. One of the differences is that the new saws have beefier side rail extensions, which makes sense since you might expect to cut wider and heavier materials with a 12″ saw.

One thing I don’t quite understand is why there’s a price difference and separate SKUs for the miter saw and the AWS-capable miter saw. Neither saw comes with AWS capabilities built-in. In my opinion, there should be the non-AWS saw, and an AWS-equipped saw.

I can almost understand what they’re doing here. If you buy the $80 AWS transmitter module, you can in theory rotate it between tools. If you anticipate using different tools at different times, maybe you can use a fewer number of AWS modules, to save money.

I like what Bosch has done, creating a single connected-capable SKU for several of their new brushless cordless power tools. If you don’t want your tools “connected,” don’t buy the module. Or, you can buy it and add the functionality and capabilities to your tool now, or even down the road if your needs or wants change.

Here, if you buy the non-AWS-capable tool, there doesn’t seem to be any way to add AWS functionality down the road. So, if that’s something you might want, you have to buy the AWS-capable version, which doesn’t even come with the transmitter.

This puts users in a tough position. If you might you want this functionality in the future, it’ll set you back at least $50 extra up front, plus $80 future cost for the transmitter. If you buy the kit, the upfront difference between non-AWS-capable and AWS-capable models is $70 at the least, not including the $80 transmitter.

BUT, not many other brands offer any wireless dust extractor-activating technologies yet.

Festool came out with a wireless remote for their vacuum, and it works quite well. The remote lives on your tool or at the end of your hose, and you hit the button when you want the vacuum to turn on. Festool also has 18V Li-ion cordless power tool batteries which can activate their remote module-equipped vacuums.

I recall that early social media reviews of the Makita 10″ miter saw complained about the rails deflecting during use. It’s unclear as to if or how Makita has updated the rail design on their 12″ saw to avoid or mitigate this. However, online user reviews don’t complain about sliding deflection at all, and so if there was a problem, it might have been limited in scope. User reviews of the XSL06 saw seem to be quite positive, and so it would be fair to expect a good experience from the new 12″ saws.

It’ll be interesting to see how everything compares. 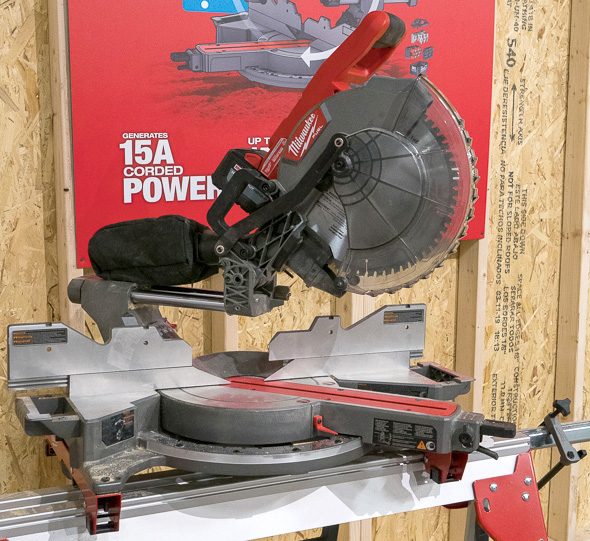 Milwaukee just came out with a brand new M18 Fuel 12″ cordless miter saw, which they showed off at their NPS19 media event.

Dewalt also has their Flexvolt 12″ sliding miter saw, and I’ve had great experiences with it before donating my review sample to the local high school.

I have to wonder why Makita didn’t officially announce their new 12″ sliding miter saws, or why there were no press materials. Cordless 12″ miter saws are a big deal, and so I would have expected some media fanfare. It’s not just that Dewalt had cornered this market for several years, they were the only player until just now.

Now, all of a sudden, we have brushless-motored cordless 12″ sliding miter saws from Dewalt, Makita, and Milwaukee.

Are you excited about Makita’s new 12″ sliding miter saws? Which will you be looking more closely at, the new Makita 18V X2, or Milwaukee M18 Fuel?