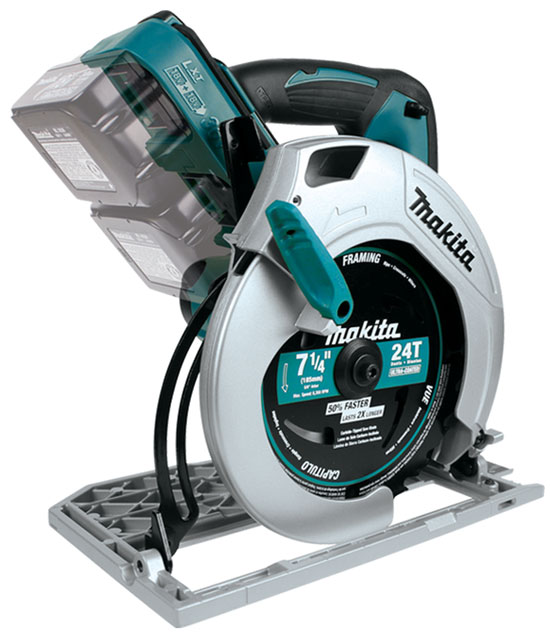 A couple of months ago we discussed some of Makita’s new cordless power tools for 2014, including an 18V X2 LXT Li-ion circular saw. As with the other tools Makita released as part of their 18V X2 LXT platform, including a chain saw and rotary hammer, the new XSH01Z saw is powered by (2) Makita 18V batteries in series, essentially making it a 36V tool.

Makita USA has not provided any information about the saw, but we were able to acquire some new details and technical specifications from an international sales flyer.

Makita says that the new 18V X2/36V circular saw comes as close to the power of AC models as possible.

When compared to Makita’s latest 18V circular saw, the 18V X2 model is said to provide 2.35X the cutting speed and does 2.05X the work per battery charge.

For the runtime test, Makita used (2) 3.0Ah Li-ion batteries for the 18V X2 saw, and (1) battery for their 18V saw. Presumably, if (2) batteries are used with the 18V saw, the difference in runtime, or work amount per battery charge, becomes negligible.

Makita did not clarify upon how they tested for cutting speed.

There look to be both pros and cons to the new Makita 18V X2 LXT circular saw.

The saw can be used with 7-1/4″ circular saw blades, rather than the 6-1/2″ blades cordless saws are typically engineered for.

The new cordless saw weighs nearly as much as corded AC-powered models. At 10.1 pounds, it is 20-27% heavier than some competitors’ 18V and 20V Max saws.

The saw is “right-handed.” Most cordless circular saws these days are “left-handed,” which means users will have to change their usage habits.

Brushed motor. Milwaukee’s M18 Fuel brushless circular saw is already on the market, and other brands might eventually follow with brushless models of their own. What this means is that the X2 saw might be facing heavy runtime, power, and application speed competition in the very near future.

We are very optimistic about Makita’s 18V X2 LXT tools, and really like the idea of the new circular saw. From a practical standpoint, the X2 designs allow for 18V users to use 36V-equivalent tools without the need for additional chargers and batteries.

However, Makita is not the first tool brand to design higher voltage tools that are powered by multiple lower voltage battery packs. What this means is that other brands can follow their lead if they choose to. It will definitely be interesting to see how competitors respond to the X2 lineup.

What also remains to be seen is whether users will gravitate to the new saw. It looks like a compelling product for users who are in need of more power or cutting capacity than current 18V saws could provide, but a slew of competitively featured brushless 18V models are surely on the horizon and hot on the heels of Milwaukee’s Fuel model.