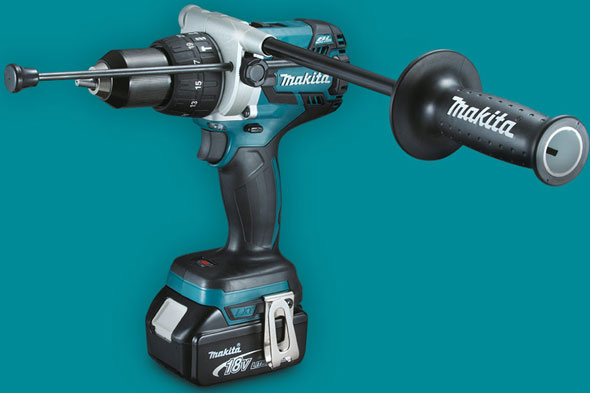 A few days ago we discussed the new Makita 18V XPH07 brushless hammer drill, which we believe will be the yardstick to which other heavy duty cordless drills will be compared. On paper, the drill is boasted as being able to deliver 1,090 inch-pounds of torque.

However, a recent review by two Aussies questions the validity of Makita’s torque claims. Their finding is that this drill is not the groundbreaker the advertiser [Makita] would have you think. Despite this, the reviewers did have good things to say about the new drill’s size and weight.

You can watch their review here:

Update: Phew, reviewers’ retests with a second drill and different battery pack show a striking difference. They concluded that the first tool and battery combo must have have defective in some way.

The reviewers compared the new Makita drill to Dewalt’s DCD985 3-speed premium drill – not the more recent Dewalt brushless model – and saw that the Dewalt was the faster and better performer when it comes to high torque fastening applications.

In the reviewers’ large fastener tests, the Dewalt drill fully installed the fasteners while the Makita installed them most of the way. The Makita drill took a lot longer to get the job done because the electric cutout tripped a lot sooner. This was probably due to an over-current or temperature sensor built into the tool to protect the battery, motor, or other drill components from damage.

(On the bright side, sensitive electronic protection should help prevent drills from burning up their motor windings when pushed beyond their limits.)

We did some digging and found a few more torque specs for the new XPH07 drill and its DHP481 international sibling:

The Dewalt 20V Max DCD985 is rated at delivering a maximum power of 535 UWO (Dewalt’s proprietary “unit watts out” unit), and overseas the rating is given as 80 Nm (708 inch-pounds) for hard joints, and 38 Nm (336 inch-pounds) for soft joints. Keep in mind that the DCD985 is no longer Dewalt’s most powerful 18V/20V Max cordless hammer drill.

It’s unclear as to why the reviewers did not see a matchup between the new Makita drill’s on-paper torque specs and its real-life performance. It’s also a little disconcerting that the Aussie tool reviewers saw at best on-par performance between Makita’s new drill and Dewalt’s previous-generation non-brushless model.

I think it is very highly unlikely that Makita’s torque rating is bogus. The only thing I could think of is that maybe the reviewers’ tool was defective. While on-paper specs should never been the sole reason to purchase a tool, there’s often no better way to reasonably gauge a tool’s fastening and drilling power. Makita has always been honest and even conservative with their torque ratings before, and there’s no reason to believe that’s not still the case.

Makita’s new heavy duty hammer drill won’t be available in the USA for a few more months, and so we’ll reach out to Makita for comment in the meantime. We’ll let you know what they say.

We hope to get to the bottom of this. If anyone else can think of a valid explanation for this, we’re all ears.

Reminder: Watch that new second video, which addresses some of the disconnect between Makita’s claims and the reviewers’ initial test results.

The reviewers have determined that either the Makita drill or battery pack used for initial testing were defective.

A Makita USA representative has said:

We’re finding that the [XPH07] torque is superior to others in the category, especially in using large fasteners like 2-9/16” self-feed and 7/8” Forstner bits (and even in driving lag bolts, although for this application contractors typically pick up an impact tool).