ToolGuyd > Power Tools > Cordless > New Makita Bluetooth Speaker
If you buy something through our links, ToolGuyd might earn an affiliate commission. 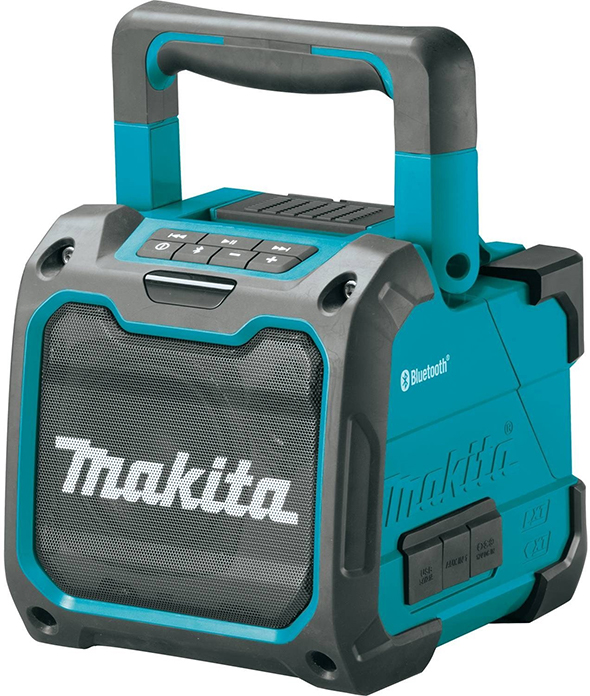 A few years ago, there weren’t any Bluetooth-connected jobsite radios. I think Milwaukee’s M18 behemoth was the first. When I wrote about Makita’s then-new jobsite radio in 2013, it had an iPhone dock featuring the outgoing connector style.

Nobody really wants to leave their phone on/in/near their radio or music player, at least not when working tools. Right? I keep mine in my pocket.

A lot of people still listen to radio stations on their cordless music players, but Bluetooth-transmitted music, podcasts, or internet radio stations have become far more popular. That’s my assumption, I have no data on this, but it seems to be true.

Bluetooth radios are fully-featured music-playing devices, with multiple source options. This new Makita model is a Bluetooth speaker, which is a little less featured, but still packed with some nice bells and whistles.

In addition to Bluetooth connectivity, it also has an auxiliary input port, in case you do want to directly connect an audio source. There’s also a USB charging port and DC adapter in case your battery pack is needed elsewhere.

In terms of sound, Makita equipped the speaker with two-way speakers featuring a woofer for low sounds and tweeter for high sounds.

There are some surprises as well. The speaker can be powered by Makita slide-style and pod-style Li-ion battery packs, from 10.8V to 18V. In other words, you can use 12V Max or 18V battery packs. The runtime specs are likely for a 6.0Ah 18V battery pack.

From the description, it seems that the speaker is compatible with Makita’s older 12V Max battery packs as well.

It’s constructed to be water and dust resistant, and with protective bumpers to soften rough handling. From the product photos, there’s also a device bay that’s sized for today’s larger smartphones.

This looks to be a nicely featured cordless Bluetooth speaker. I like the multi-size battery compatibility, and that there’s a built-in USB charging port. The aux input is a nice touch as well.

Makita describes this as a Bluetooth speaker, but it seems to me like it’s more of a full-fledged jobsite/robust music player, with only the radio tuner being absent. When I think Bluetooth speaker, I usually consider a much simpler no-frills device.

Assuming the controls are intuitive and the speakers sound great, this looks to be one of the better compact cordless music options out there, at least as far as power tool brands are concerned.