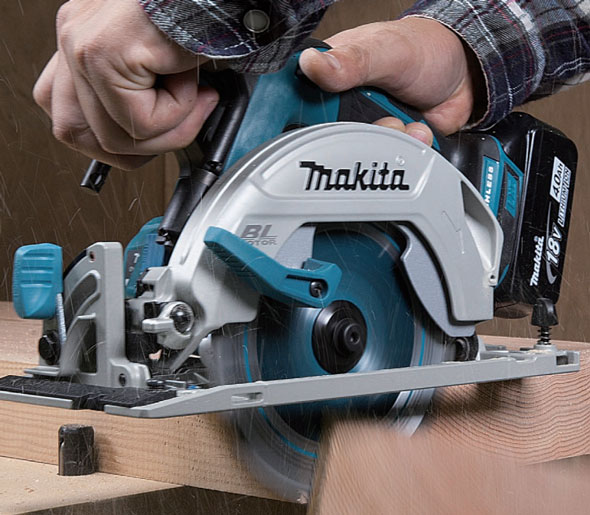 Makita has come out with a new 18V brushless cordless circular saw. Model DHS680 will be launching internationally, and a similar model, XSH03M, has been announced for the USA market.

Details below pertain to the international model, as Makita USA has not released any official details or specifications yet. All they announced thus far is that an 18V brushless circular saw with automatic speed control technology will be released in early 2015. 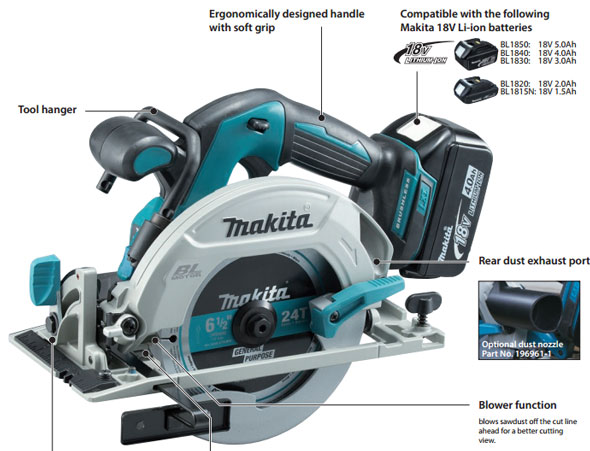 The new saw features a 6.5″ blade size, an automatic speed control that adjusts cutting speed depending on the load, a built-in LED battery fuel gauge, a diecast magnesium baseplate, a built-in dust blower, a hanging hook, and dual LED worklights.

Makita says that not only is their new brushless circular smaller than the predecessor model, it’s a little lighter too. The new saw is 160mm (6.3″) at its widest point, and it weighs 3.3 kg (7.3 lbs).

Optional accessories will include a dust collector nozzle, and a guide rail adapter for use with Makita’s track saw guide rails.

Surprising, Makita documentation says that the new brushless circular saw can be used with any of the brands’ 18V Li-ion battery packs – including their compact 1.5Ah and 2.0Ah battery packs. Again, this refers to the international model – the USA model might be different.

Just because this looks like a tool Makita might – and should – release in the USA, doesn’t mean they’re going to. They came out with a super-slim impact driver internationally many months ago, and it hasn’t even been announced for release in the USA.

Brushless motors are more efficient than brushed motors, which typically means the potential for greater runtime or power, and reduced maintenance. Often manufacturers seek a balance between greater runtime and improved tool performance, which is probably what Makita did here.

Overall, the DHS680/XSH03 looks like it could be a competitive new addition to the cordless circular saw market.