ToolGuyd > Power Tools > Cordless > Makita Brushless Hammer Drill is Smokin’ Hot – Literally!
If you buy something through our links, ToolGuyd might earn an affiliate commission. 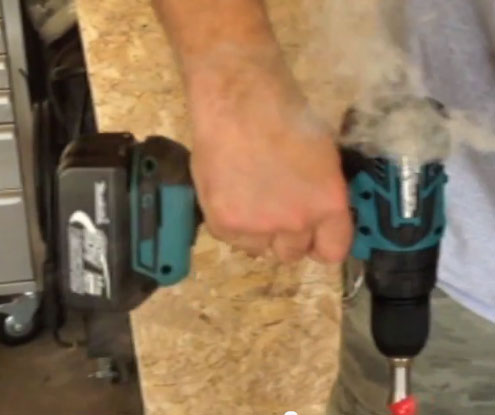 The guys over at Tools in Action have been busy testing Makita’s new brushless hammer drill. But they’re not just testing the drill, they’re pushing it to its limits as they usually do. After doing so, they found that if you push the Makita drill too far, it will cry plumes of grey smoke.

Seriously, check out that screenshot (and the video below)! They were using the LXPH05 with a 1″ auger bit to drill holes in framing lumber. Some cordless tools have too-sensitive overload protection, but Makita’s new hammer drill appears to have the opposite problem.

Yes, they were using a high-speed gear, and yes they probably should have stopped pushing the drill as soon as it started smoking. But tools with proper overload protection usually turn off on their own.

The last drill I smoked was a Dewalt 12V drill/driver. I was using it to drive in a long lag bolt and it shut off on me. So I pulled the trigger again. Almost immediately, it shut off. I kept doing this a couple more times to finishing sinking the lag. After a few times it released a small puff of smoke and I took a break.

Most users won’t keep pushing a drill/driver after it starts to smoke. Still, no drill should be smoking up like that. The guys from TIA sent over a few thermal images that show a temperature of 175-235° at the air vents. That can NOT be good for the drill’s electronic and mechanical systems.

We’ve heard a lot of complaints about many brands’ cordless tools shutting off during use. I complain about the same every now and then. But this is a great example of why tools have overload protection.

It is possible that TIA tested a defective model, or the tool was designed with under-sensitive overload protection, but it is more likely that they just pushed the tool beyond its limits until it destroyed itself.