ToolGuyd > Power Tools > Cordless > New Makita Cordless Pin Nailer
If you buy something through our links, ToolGuyd might earn an affiliate commission. 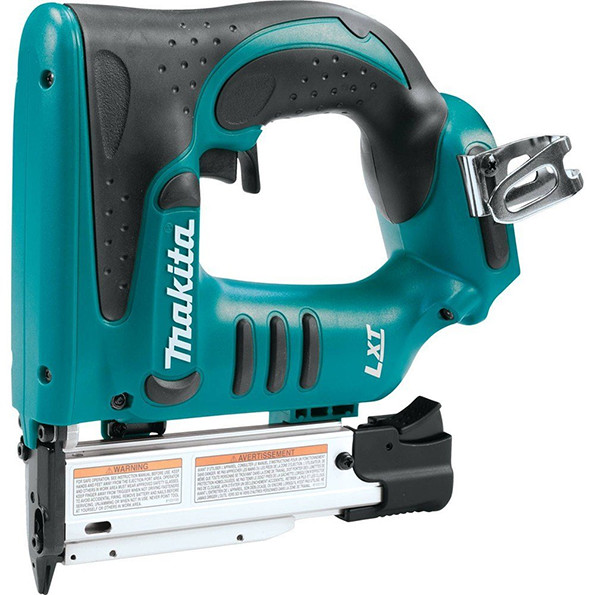 Makita has come out with a new cordless 18V 23 gauge pin nailer, model XTP01Z. We’ve seen a lot of new cordless nailers come out these past few years, with most touting things like air-like power and performance, but there has definitely been a noticeable absence of smaller gauge nailers.

Makita previously came out with an 18V crown stapler (XTS01Z), currently $180 via Amazon, and the new Makita XTP01Z bears some resemblance to it.

Additional features include an anti-dry-fire mechanism and a built-in LED worklights. It weighs 4.6 lbs with a battery, which you’ll have to supply yourself.

Price: $207 (battery and charger not included)

John made a good point in our recent Makita $25 off $100 discount discussion. If you order one now, you get the $25 holiday discount, and you also get a place in line for when the pinner starts shipping.

Although the new Makita cordless pin nailer looks a little bulky (it’s hard to tell without seeing it with a battery attached or in-hand), it certainly doesn’t look as large or unwieldy as Makita’s “air-like” cordless brad nailer which was previously released internationally but not in the USA.

The ergonomics also look a little unconventional – just look at that curved grip – but looks aren’t everything.

If you’ve been waiting for a modern Li-ion cordless pin nailer, now might be a good time to consider buying into Makita’s 18V cordless power tool platform, if you haven’t already. This is pretty much your only option.

Thanks to John and John for the heads-ups!