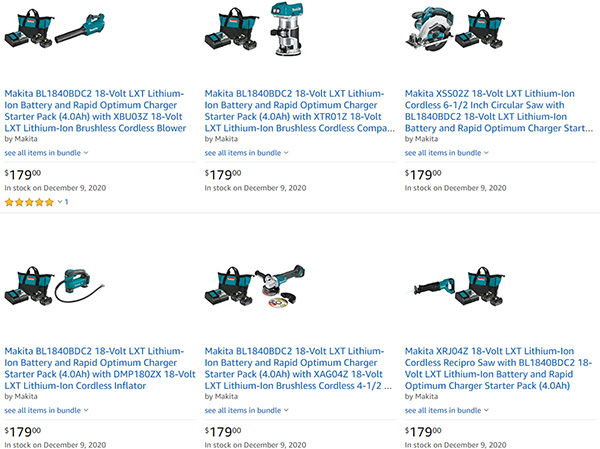 Makita is participating in that promo, and with the first tier featuring a $199 starter set. You buy that Makita 18V starter kit, with 2x 5.0Ah batteries, charger, and tool bag, and you select a bare tool from a list of several FREE BONUS tool options.

I dug into Amazon’s Black Friday Week deals listings, and came across a new Makita promo, or at least one that I did not see before.

Shop This Makita Deal via Amazon

Here, Amazon has 7 Makita 18V bundle deals, plus 2 other Makita promos, and it’s worth looking at those too, with one being a rather good subcompact combo kit and free battery deal.

Now, this is not quite the same deal as Home Depot’s.

$179 seems more than fair for what you get. Here are the options as of the time of this posting:

I’m calling them bundle kits because you are basically buying the 2x 4Ah and charger starter kit and the bare tool for each.

Amazon has the Makita 18V starter kit priced at $179, and so you’re essentially getting the bare tool for FREE.

Looking at the bare tool prices, starting with the brushless router – the bare tool is $129 from Amazon and authorized dealers, and the starter kit is $179. Paying $179 for a $308 bundle seems like a very good deal.

The angle grinder is priced at $149 by itself, and the blower is also $129. The other tools vary in price, but seem to be priced in the same ballpark.

The starter kit is sold out at the moment and said to be back in stock December 9th, 2020. You can order now and receive the tools as they arrive. If you wait, there’s a good chance the bundles will sell out and you’ll be out of luck.

It looks like Amazon offered the same free bonus tools as Home Depot, but some of them sold out already.

Shop This Makita Deal via Amazon

Update: Acme Tools has a similar promo. There are a couple of more tool choices there – including the brushless router, 5″ sander, and other options. Acme Tools also has the $199 5Ah starter kit promo bundle option as well.

If you prefer Home Depot’s deal: