ToolGuyd > Power Tools > Cordless > New Makita 2-in-1 Cordless Ratchet has Interchangeable 1/4″ and 3/8″ Anvils
If you buy something through our links, ToolGuyd might earn an affiliate commission.

Makita has quietly announced a new 12V Max CXT cordless ratchet that features a 2-in-1 drive mechanism. It comes with interchangeable 1/4″ and 3/8″ anvil assemblies, allowing it to be with with different socket sizes and attachments to suit a range of applications.

Gordon wrote in with the heads-up:

Just got this email about a swappable 3/8 and 1/4 Makita ratchet. The interesting part, based off the M12 conversation, is this from the listing “When the motor is not engaged, the ratchet can be used manually”. It’s the RW01Z. Looks like it’s been out for a week now, but Makita is pretty bad with press releases.

Thanks for the heads-up! About the absence of Makita USA press releases, that’s something we’ve been deeply frustrated about as well. While not as many details or insights as I’d like, luckily there’s enough public information to paint a decent picture. 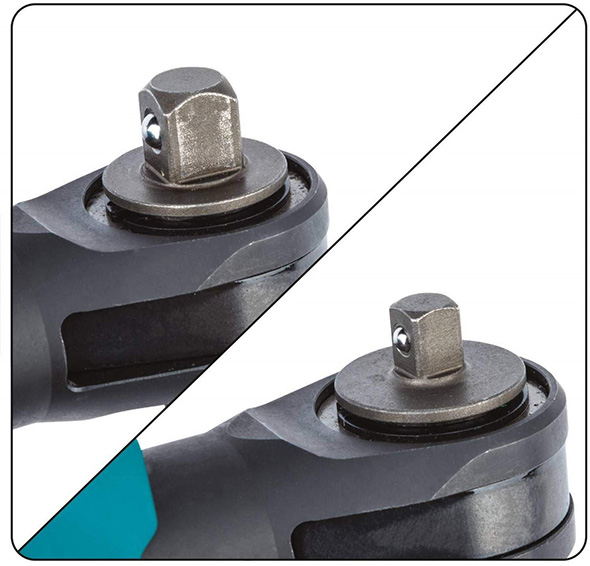 Makita’s new ratchet is essentially a dual-mode ratchet. Depending on which accessory you install, it can be used as a 1/4″ ratchet or a 3/8″ ratchet. 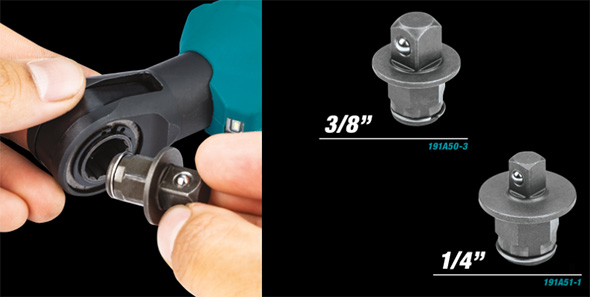 From the looks of it, Makita’s 12V CXT cordless ratchet has a hex socket and perhaps a hog-ring-like retention mechanism.

I have not seen any other cordless ratchet with this type of mechanism, but I have seen similar principles before in Gearwrench’s ratcheting wrench socket adapters. 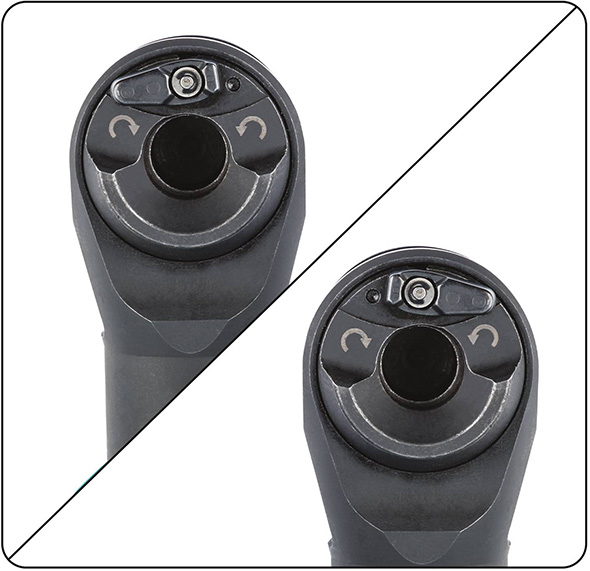 A direction selection switch is located on the back of the ratchet head. 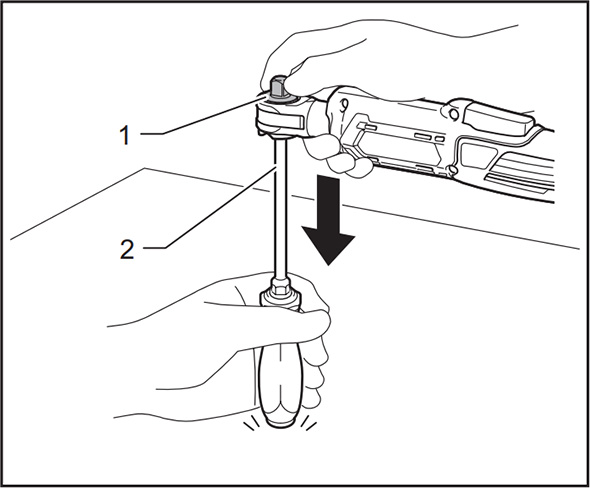 The user manual shows the anvil/socket adapter removal procedure, which involves tapping it out from behind using a screwdriver or other such tool. 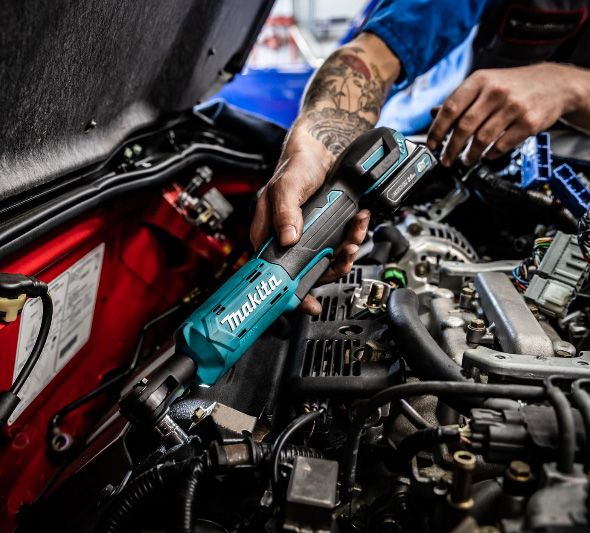 Makita USA product photos show the ratchet being used in an engine bay, but it could find uses outside of automotive maintenance applications.

Makita says their new cordless ratchet operates at 0-800 RPM, which is considerably faster than the 250 RPM specs for Milwaukee’s brushless-motor ratchets.

The user manual describes a couple of other interesting aspects of the new Makita cordless ratchet:

When the bolt/nut reaches the seating position, the tool stops automatically. They also caution about kickback that can occur when the socket stops rotating suddenly, but this can be true for any cordless ratchet.

Makita says that the socket adapter receiver can be used without either anvil as a 13 mm socket.

Although they say that the ratchet can be used as a manual ratchet, such as to loosen a tight nut or bolt, they caution that excessive fastening torque may damage the bolt/nut, the socket or the tool.

The kit comes with a 2.0Ah battery, charger, and carrying case. The bare tool and kit both include the two anvil sizes.

What a neat idea. 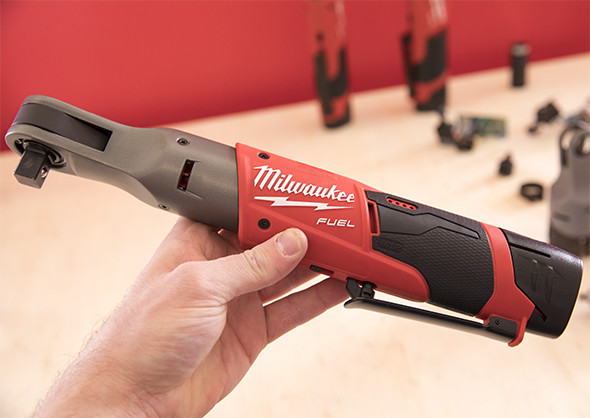 My mind gravitates towards comparing the Makita cordless ratchet with Milwaukee’s M12 Fuel models, so let’s do that.

The new Makita cordless ratchet has a trigger switch, and although I would hesitate to call it oversized, there doesn’t seem to be much to complain about. Milwaukee’s M12 and M12 Fuel cordless ratchets have more traditional-styles switch mechanisms, or at least they have electric switches that attempt to imitate the action of air ratchet valves.

The comparison is tough, and not just because of the difference in specs. Makita’s cordless ratchet operates faster, while the newer Milwaukee M12 Fuel ratchets are more powerful. The comparison between the Makita cordless ratchet and Milwaukee’s brushed motor models are fairer, but there are still a lot of differences in form factor and design that one brand isn’t necessarily better than the other.

It seems to me that Makita was looking to maximize the value of their 12V Max CXT cordless ratchet. (This is the kind of insights that press releases usually provide. With Makita USA focusing more on social media than media or press channels, we’re left to guess.)

There’s no mention of the motor type, which usually indicates that a tool is built with a brushed motor and not brushless. A brushless motor would likely bump up the torque specs, but I’m not sure it would make the tool any more compact or ergonomic. It’s possible that Makita also plans on releasing brushless motor ratchets, and if so, this would likely still be the value-focused option.

With both 1/4″ and 3/8″ socket adapters, users get both sizes in one tool. Even users who would lean towards buying just one tool, the other anvil size might still come in handy. Meaning, if a user would be leaning towards a 3/8″ cordless ratchet, this tool gives them that, but also a 1/4″ anvil if or when needed. While you can step down using an adapter, doing so increases the length of the tool and is a trade-off that work spaces cannot always accommodate.

Compared to Milwaukee’s original cordless ratchets, the new Makita ratchet has an advantage with respect to versatility and speed (800 vs. 250 RPM). The Milwaukee ratchets have a more automotive-styled trigger switch, lower weight, and more streamlined form factor due to their stem-style battery pack.

Makita says that you can use their ratchet manually, and while Milwaukee doesn’t recommend this, users do it anyway.

Personally, I don’t have a clear preference. If you’re interested in buying a cordless ratchet, which one would you buy? If you didn’t already buy into Makita or Milwaukee’s 12V-class cordless power tool systems, it’s a very tough question to answer, but one that will probably come down to preference. If you already bought into Makita’s 12V Max CXT cordless power tool system, woo!, here’s another new tool in their continued efforts to expand the lineup.

Are there any downsides to the interchangeable-anvil ratchet? I don’t think users will be swapping socket adapters all that frequently, but it looks like an easy process. Is there the risk that you’ll yank the anvil out with a socket? It’s possible that the strength of the ball detent was controlled so that socket removal is easily achieved without pulling out the anvil at the same time.

Besides Makita and Milwaukee, there are a number of other cordless ratchet options out there, such as by Ingersoll Rand. Comparison against some of those models become even more difficult. For instance, the IR cordless ratchets feature polished aluminum housings and are aimed entirely at automotive maintenance and similarly demanding applications. Is the new Makita ratchet solely aimed at automotive users?

With an 800 RPM spec rating, will Makita’s trigger switch provide enough resolution and feedback for users who want to operate the tool at lower speeds?

We reached out to Makita USA, asking why their 12V Max CXT cordless ratchet operates at much higher speeds than other tools in the industry and are waiting for a reply.

Overall, this looks like a decent new cordless power tool offering for Makita 12V Max CXT users, and there are some aspects which could win over some users who might have been seriously looking at Milwaukee’s M12 line.

Does Makita’s new cordless ratchet offer enough to sway more demanding users away from automotive brands, such as Snap-on and Ingersoll Rand?