ToolGuyd > Power Tools > Cordless > Makita Jobsite Radio Review (LXRM03B)
If you buy something through our links, ToolGuyd might earn an affiliate commission. 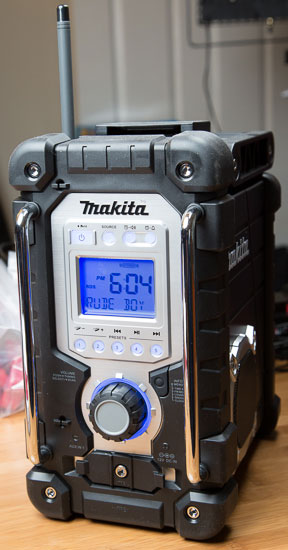 Makita’s newest jobsite radio, model LXRM03B, puts out some pretty nice sound, especially given its toaster-like size. It’s not completely new, but a revamp of an older 18V model.

One thing I’ve noticed is that the jobsite radio grabs song and station information from radio signals, similar to what modern car radios do. For example, did you see “Rude Boy” on the display in the above photo? This is not an essential feature, but it’s nice to have. 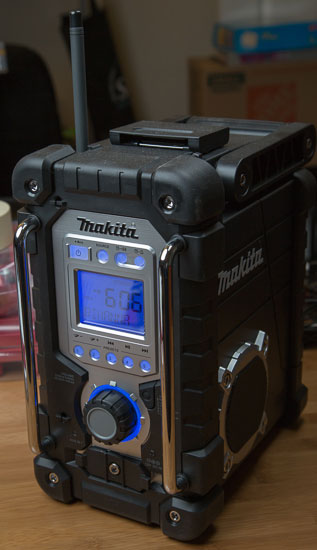 Other than how well ruggedized the radio is, the first thing I noticed was the blue backlight illumination that activates whenever the controls are touched. It probably helps with low-light readability, but I just liked how it looked. 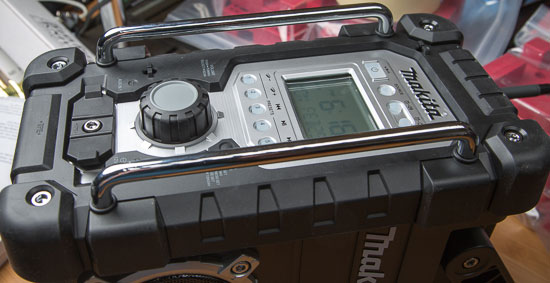 This radio is superbly built. I didn’t drop it down a flight of stairs, but it could probably handle it. It sports roll cage bars on the front, and rubberized bumpers all along the chassis. 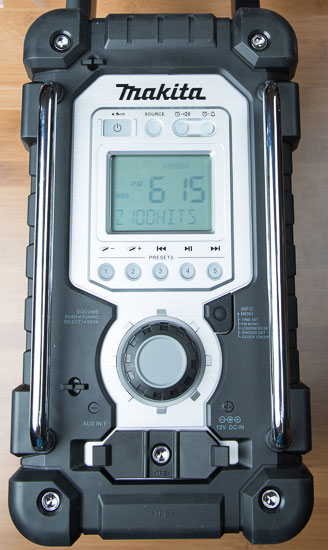 The first thing I tested was the radio reception, which was excellent. I tuned into Z100, and the speakers output static-free and distortion-free tunes.

The digital controls worked well, with instructions printed right on the device itself in case you forget which button does what. 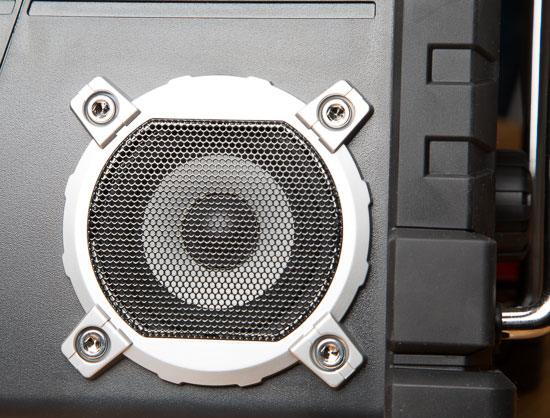 While the Makita radio doesn’t have a built-in subwoofer like the popular Bosch Power Box 360, I didn’t find the sounds to be lacking. No, it’s not going to give you rich bass, but the sound was clean and clear. 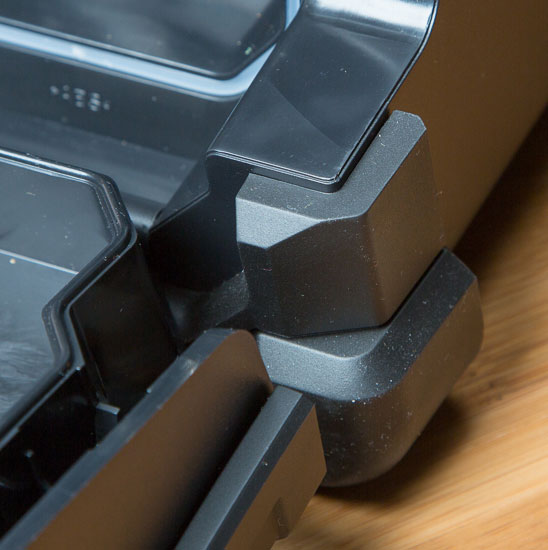 I opened the door to snap an image of the battery compartment and was fairly impressed at the thickness of the rubber bumpers. They’re not huge, but thick enough to absorb minor jostling you can expect to see at a jobsite. 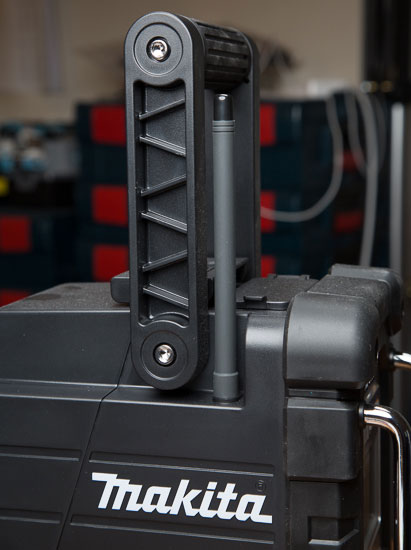 The handle is robust and comfortable to hold. It folds down for storage to help keep things compact.

Makita opted to give the radio a fixed and somewhat flexible antenna. The good thing about this is that it’s not going to break, at least not easily, and it should be somewhat weather proof. On the downside, it sticks up all the time and will get in the way if you want to place the radio on an enclosed shelf. 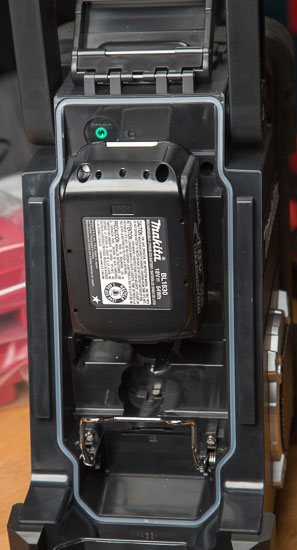 You can power the radio via Makita’s 12V or 18V battery packs, and even a couple of the older slide and post or stem-style batteries. Plugging the radio into a wall outlet with the included AC adapter does not charge any attached batteries.

That green circle above the battery pack is an auxiliary input, meaning that your mobile device or mp3 player can be enclosed within the sealed compartment. 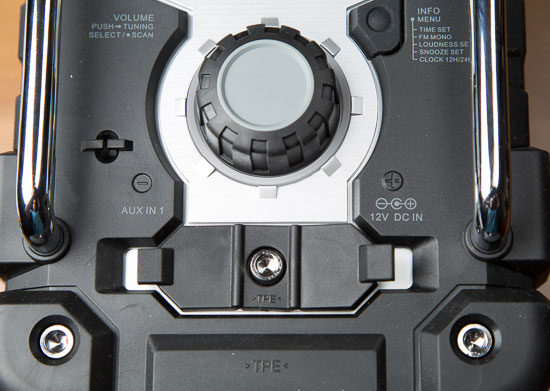 There’s also a separate aux input on the front that allows for easier access to your phone or mp3 player’s controls. The DC input jack is right next to it, behind a flap that offers a reasonable level of protection against water and dust. 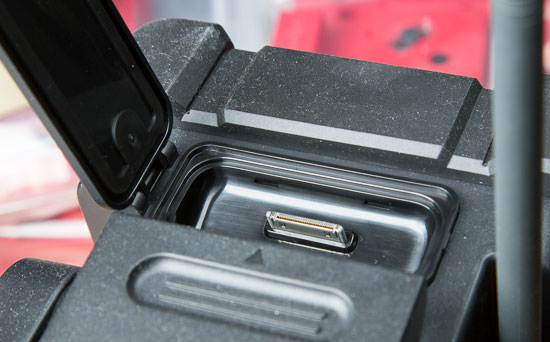 Since I don’t have an iPhone or iPod I couldn’t properly test out the dock. The aux inputs work as expected, although I find myself tuning into the FM radio a bit more. 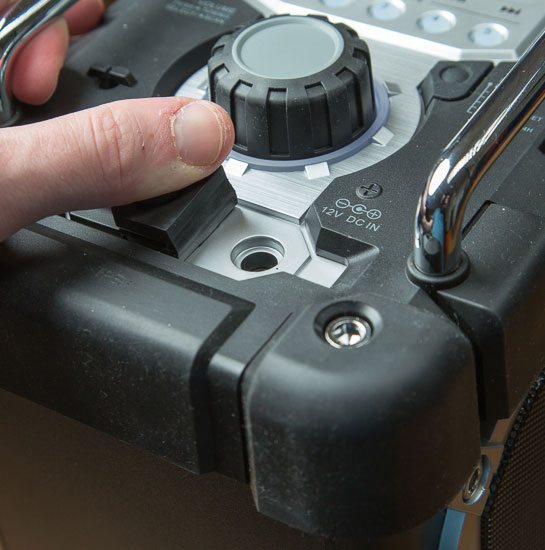 I can’t imagine anyone wanting to operate the radio out in the rain, or even being able to hear it in the rain, but the radio can probably handle a light drizzle if all access points are properly sealed. Just remember that it is water resistant, not waterproof. 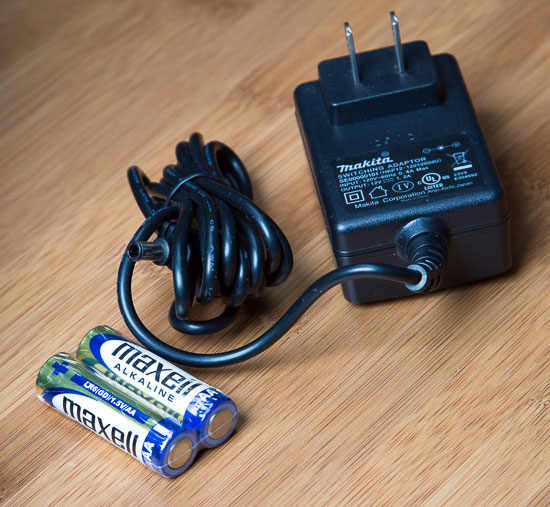 The included wall-wart AC adapter can be stored inside the battery compartment when not in use. It fits right in there with an 18V LXT high capacity battery.

As for the two AA batteries, those are so that the clock and radio preset settings don’t change every time you unplug the radio or change out the battery packs. I’ll pop them in… eventually.

Overall I found myself quite pleased with the radio’s quality and capabilities. It’s robustly built, thoughtfully designed, and it sounds great.

I wish this was a combination radio and charger, but there’s really no room to cram charging capabilities in there.

The price is a little steep – $150 for the bare tool, but you get a number of added features and upgrades compared to the previous generation model.

Keep in mind that this is just the radio, so you must bring your own battery and charger if you want cordless operation.

To be honest, I cannot identify too many differences between the new radio reviewed here (LXRM03B) and Makita’s previous model (BMR100W). The new version has an iPhone and iPod dock and what appears to be improved ruggedness and bumper protection.

The older BMR100W radio has been on the market for a couple of years now – at least 5 if you go by the age of reviews on Amazon – so it’s probably that the internal circuitry was updated as well.

Going by online images, the newer radio’s LCD display looks easier to read as well, with its thick and dark lines.

I found the new jobsite radio to be an excellent product. If you don’t need the iPhone/iPod dock and don’t mind the look of the older model, you can save a bit of cash by foregoing the latest and greatest.

Thank you to Makita for providing the review sample unconditionally. Review samples are typically given away, donated, or retained for benchmark and comparison purposes.