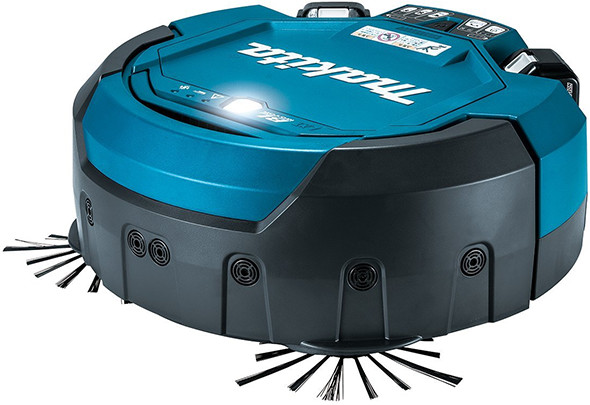 Overseas, Makita has come out with a Roomba-like cordless robotic vacuum, called the RobotPRO (model RC200DZ). Judging from the product usage photos on Makita’s site, it’s designed for commercial environments, such as workshops, offices, warehouse floors, and production facilities.

According to a Japanese press release, Makita jointly developed the new robotic vac with Sharp.

This vac is packed with some rather fancy features. 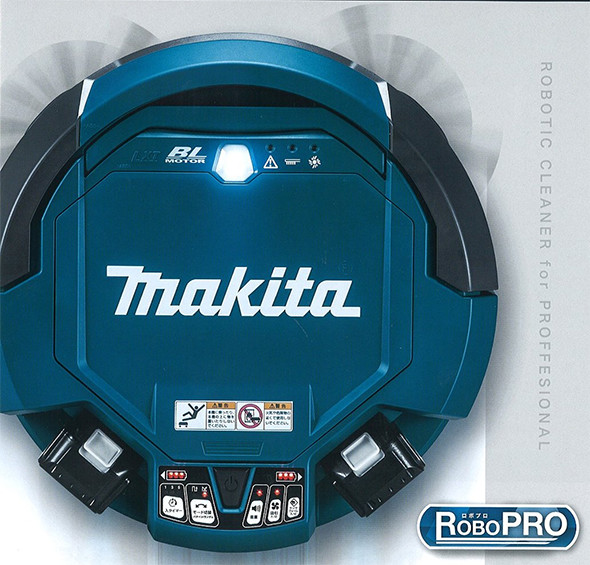 Although the new vac is powered by two 18V Li-ion battery packs, it doesn’t seem to be described as a Makita 18V X2 product, suggesting, along with other indications, that the batteries are run down sequentially, rather than in parallel. That seems like a good idea for a product like this, for 2 batteries to provide for longer runtime.

Dust collection capacity is 2.5 liters, and there are separate coarse and fine debris collection compartments, which are removed as part of a single dust box for emptying.

There are 2 travel patterns – one that systematically covers an open space, and one that sets the vac off in a random direction. There are bump sensors, 8 ultrasonic sensors, a gyroscope to ensure straight traveling, 4 infrared sensors to prevent tipping over, “stack detection” wheel sensors and a geomagnetic sensor, and it comes with tape for creating no-go “invisible wall” barriers.

You can turn the suction fan off, which means the vacuum will only collect larger debris and not smaller particles. This means it will collect “large visible dust,” while extending runtime by around 2 times.

There’s a timer function, and also a remote control. The remote has a “body position announcement function” which helps you find the vacuum in a larger or obstacled space.

The vacuum’s large brushes are removable and washable, and the dust box is also washable.

One last thing – it’s got a brushless motor, which likely contributes to the runtime.

Here’s a long intro of the new robot vacuum, as part of a longer Makita vacuum cleaner promo video:

When digging deeper to understand some of the product features, I saw a comparison between this Makita RobotPRO robotic vacuum, and Roomba units. For one, the Makita vacuum is a lot bigger. It has a larger dust collection tank, and also I believe longer runtime.

Would a product like this do well in the USA? Actually, I think it might, although I wish I saw the vac being demonstrated in shop settings rather than cleaner-looking commercial spaces.

There seems to be a lot of innovation packed into this vacuum, and a lot of thoughtful features. While steeply priced, it’s easy to appreciate the effort that went into making this into a seemingly superior product.

It doesn’t have self-charging features, but you can swap the batteries quickly, or remove them for quick recharge. Assuming the 2 batteries work sequentially in a logical order, you can in theory squeeze continuous use out of the robotic vac as long as you don’t mind cycling the batteries back and forth to the charger.

I would say that this obviously wasn’t meant for major cleanup tasks, but its coarse dust and chip collection capabilities suggests that it should be fair at picking up larger bits of stuff.

It has a 2.5 liter capacity (about 2/3 gallon), compared to a Roomba’s less than 1 liter capacity. Roomba doesn’t openly disclose the specs, but I saw 0.65 liters spec floating around the web in a few places in the context of older models similarly sized to their latest ones. In other words, the Makita vac can pick up a lot more dust and debris before needing to be emptied.

Looks good. Pricey, but a solid-looking innovation I hope that Makita brings to the USA market.