ToolGuyd > Power Tools > Cordless > New Makita Sub-Compact Circular Saw (XSH05ZB) is “AWS-Capable”
If you buy something through our links, ToolGuyd might earn an affiliate commission. 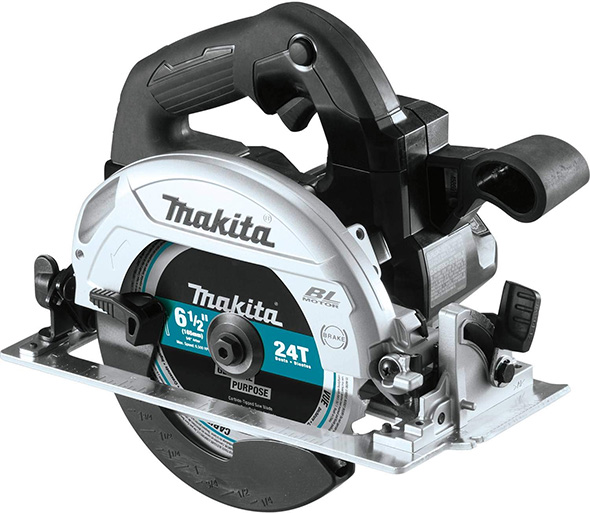 The new saw, XSH05ZB, is nearly identical to the Makita 18V sub-compact circular saw (XSH04ZB) that came out in mid-2018, but with a slot for their AWS transmitter, sold separately.

That part confused me a bit. This version of the Makita sub-compact brushless circular saw is AWS-capable, but not AWS-equipped, at least not out of the box.

Other Makita cordless power tools with AWS capabilities, such as their 18V X2 plunge-cutting track saw, come with an auto-start wireless transmitter, 198901-5.

The new saw is priced a little higher than the non-AWS-capable saw, and you’ll also need an AWS Bluetooth transmitter module, which is currently priced at $80.

The transmitter module is optional but needed for AWS functionality.

The saw comes with a dust port accessory.

Something stood out to me at first: this saw is marketed as an AWS-capable tool, but it doesn’t come with the AWS transmitter, all the while still being a little more expensive than the non-AWS-capable model?

Then I thought: are users going to buy another $80 AWS transmitter module for this saw? And then I realized, maybe not.

Circular saws are very rarely used with dust collectors, and the ones that are, they’re specially designed for it, such as Makita’s plunge-cutting track saws.

I can see this saw being used for certain tasks where its compact size and lighter weight can be a great benefit. I’m sure there will be some users who will want it equipped with AWS and connected to a vac hose all the time, and that’s okay. Other users might own a different Makita AWS saw, or saws, that are more traditionally paired with dust extractors. If or when there comes a time when they need or want to use this sub-compact circular saw with AWS tech and dust collection, they should be able to pull the AWS module from an existing saw to temporarily equip this one.

How many AWS-equipped saws will a user operate at any given moment?

Why buy the AWS-capable model (XSH05ZB) over the regular non-AWS version (XSH04ZB)? Well, you have the option of using AWS with it, if you so choose.

If you’re maybe interested in using a sub-compact Makita brushless circular saw with their AWS vac activation tech, this is the model to choose. You can buy a transmitter later, or “borrow” one from a different tool that has one. If you’re absolutely interested in having this saw connected to an AWS-equipped dust collector all the time, pick up a wireless transmitter for it as well. If you have no interest in AWS vacs or vac triggers, the non-AWS version is a little less expensive.

So, to sum things up, this new Makita AWS-capable sub-compact brushless circular saw is basically the same as the non-AWS one, but a slot for adding in an (optional) AWS wireless transmitter.

Also, keep in mind that you would need a Makita AWS-equipped vacuum or dust extractor. As far as I am aware, there is no retrofit option, it has to have AWS activation capabilities built-in.

This all assumes that the an AWS wireless transmitter modular can be swapped between tools. I can’t find any user manual that mentions it, and nothing for the transmitter itself. I’ll follow up when we hear back from Makita.