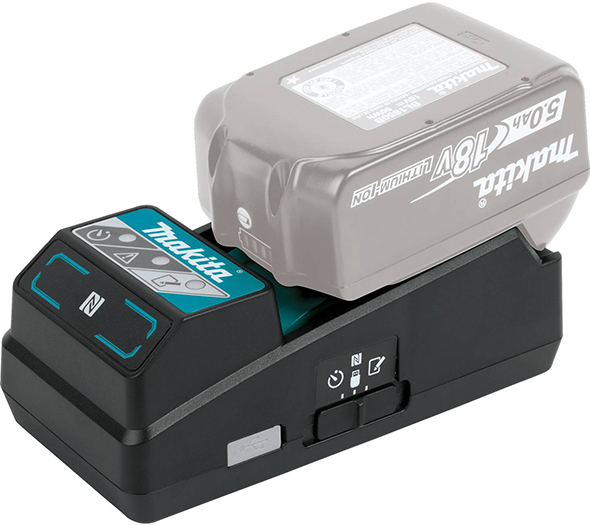 If you are concerned about battery theft, Sync Lock is for you. Makita Sync Lock is a theft-deterrent system that creates a strong incentive for your workers not to take batteries off the job site. Sync Lock disables operation and charging of Makita 18 LXT batteries by programming a lock-out schedule which can be preset by day, time and calendar.

That’s pretty explanatory. You basically set a lock-out schedule, and your batteries cannot be charged outside of those times.

Software enabled system to limit distractions on job sites that may be caused by mobile devices.

I’m not sure what they’re referring to, but perhaps they’re saying their Sync Lock battery lock-out programmer is superior than competitors’ app-based and range-based battery lock-out technologies.

If so, I can understand that; dealing with smartphone apps can be a hassle at times, complicating things. But do you know what else can be complicated? Programming each battery individually, and having to do it all over again if you want to change anything.

The device can be passcode-protected so that only authorized users can access and operate the system.

The device features a micro USB port and has 4 tamper-proof screws that look to secure the coin cell battery compartment, and a screwdriver bit to install or remove them with.

The software requirements are said to be Windows 7, Windows 8 or Windows 8.1. What about Windows 10?

Obviously, this is aimed at commercial jobsites with cordless power tool battery packs might accidentally (or not) walk off with workers at the end of the day.

It’s not clear how it actually works.

Some competing brands have been implementing app and range-based battery lock-out techniques. It won’t be long until there’s a “base station” that can be attached to a job box to set an authorized work radius.

I can see some potential downsides to a programmed lock-out system, but also some benefits.

As Makita mentioned, this is a theft-deterrent system. Maybe batteries can be programmed with a one-month lock-out period at first, and then a longer period after that. Only the person who controls the device and oversees the batteries will know about the calendar or authorized charging schedule being programmed into the batteries.

There are some potential clunky aspects of this device, but it’s nevertheless good to see some outside the box thinking.

What do you think – would this be an effective theft deterrent system? And while there’s no mention of the price yet, I’m guessing it’ll pay for itself if just one high capacity battery pack is saved from growing legs and walking off.