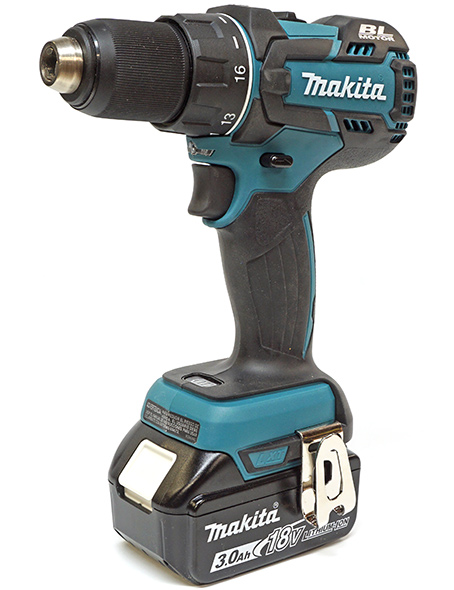 Stuart recently posted a preview of the Makita XFD 18V compact Brushless 1/2″ Drill kit — a kit seemingly priced to compete with the $99 holiday-season drill kits from Dewalt and Milwaukee.

I purchased one of these kits from Amazon on ToolGuyd’s dime and it arrived last weekend. I’ve been spending some time getting familiar with the drill and pushing it through some everyday tasks. For the record, this is the first Makita product I have ever owned or tested. I’ve tried to keep up on what tools they offer over the years, but that’s no real substitute for getting your hands on the tools.

Stuart wants to do a starter drill comparison piece, so rather than try and compare this drill to other similar drills, I’m going to focus on the different kit components and offer my impressions of the drill after using it for a short time.

Since this kit seems to be targeted at attracting new users to the Makita platform, lets look at some of the components of the kit first. 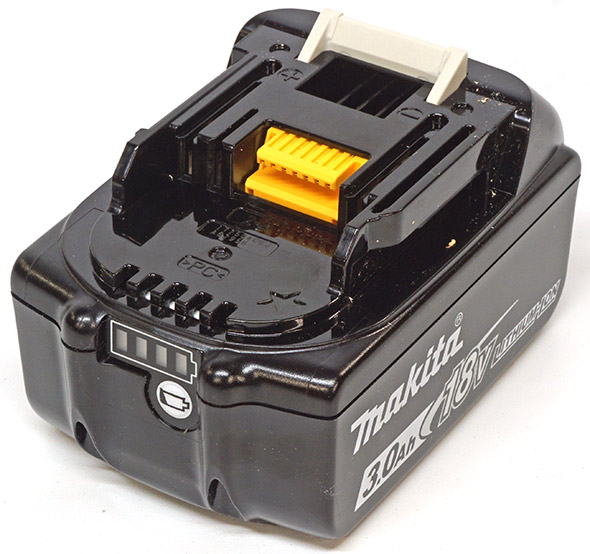 This kit comes with a 3Ah 10-cell battery — BL1830B. As far as I can tell, this is exactly the same battery as the BL1830 but with the addition of the on-board battery meter. While having a battery meter might not be as important if you only have a single battery, as you accumulate more batteries, you’ll really want to be able to check the charge state without connecting them to a tool or charger.

What’s also interesting about this entry level kit compared to some other brands is that this battery is a standard 10-cell battery and not a slim (5-cell) pack. So you’ll be able to use this battery as a good base for your Makita 18V tool collection. With the 2 banks of 5-cells in parallel, it will even be adequate for some of the more power hungry tools in the lineups, although it’ll have a shorter run time then a 4, 5, or 6 Ah battery.

Depending on your usage, you may want to purchase a second battery if you start to expand your collection of Makita cordless power tools. If you run out of juice, you’ll have to wait for your only battery to recharge. 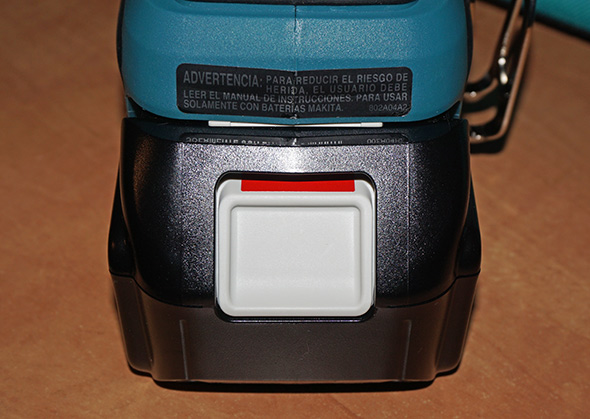 One more quick thing about the battery, I noticed this little red sticker as I was playing around with the drill. It’s only visible when the latch is pushed down. I’m assuming it’s there as a visual indicator that the battery is correctly latched onto the tool, and that if you can see it, it means the battery latch hasn’t properly engaged. 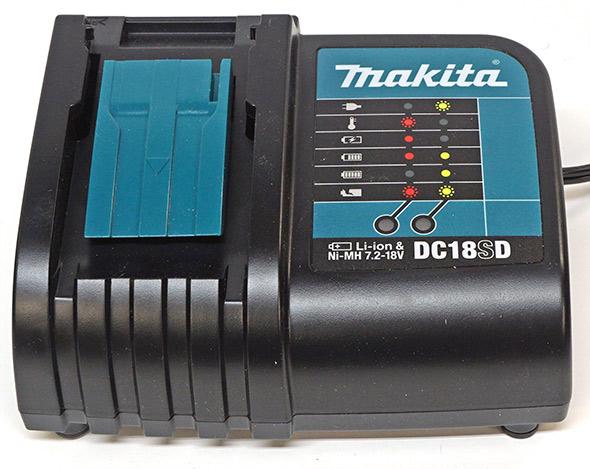 The DC18SD charger they ship in this kit is pretty vanilla. I couldn’t even find it on the Makita USA website, so you probably can’t even buy this charger by itself. I did google it and found a reference on the Makita New Zealand website though.

It can charge the supplied battery in about 60 minutes. If you get larger capacity batteries or need to charge you battery faster you could always upgrade to the DC18RC rapid charger to half your charging time.

Stuart’s Note: I didn’t even know Makita made a “slow” charger. I say “slow” because 60 minutes is about the same charging time as other brands’ standard 18V-class chargers. There’s an inflated-priced version of this charger on Amazon, in white. This charger looks to lack the cooling fan of the standard fast charger, which would logically contribute to the longer charging time, and lower price.

The bag that they supply with this kit isn’t the highest quality bag that I’ve seen, but it’s good enough. Looking at the zipper, I’m betting that’s the first thing to break. 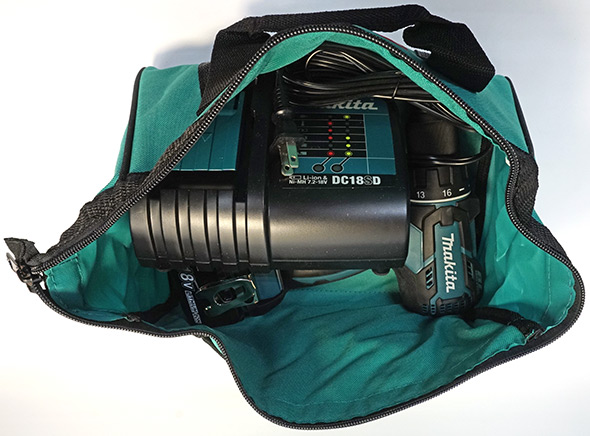 The bag is just big enough for the drill, charger, and battery. Maybe you can fit some accessories in there somewhere, or another battery, but you’ll probably want to upgrade to something else as your tool collection expands.

The bare drill weighs a little over 2.5 lbs, and with the 3 Ah battery the combo weighs just shy of 4 lbs; this isn’t the lightest drill out there. They could have shipped this drill with a slim pack to cut that weight down, but I think they made the right compromise of weight and run time. 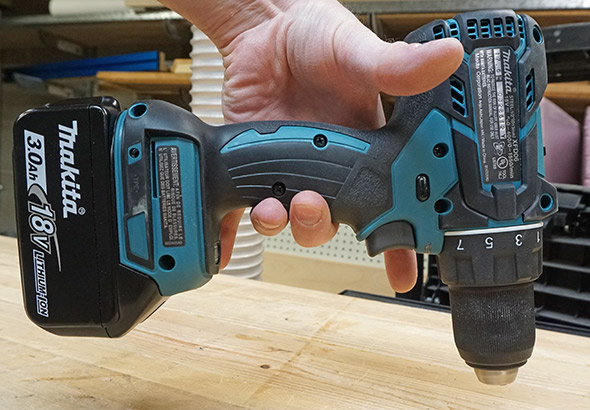 While it doesn’t feel as good in the hand as the Hitachi Triple-Anvil impact driver, the grip is comfortable and at least for me it seems designed to guide my hand right to the correct position. 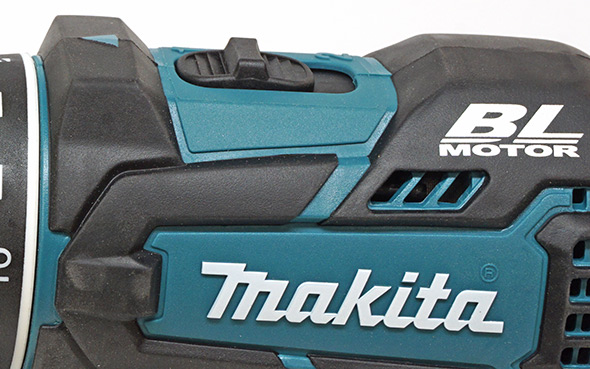 Something I noticed right away was that the speed selector is recessed below two overmolded areas. The switch has a solid feel and while I don’t think you could accidentally bump it and change speeds, it’s a nice feature. 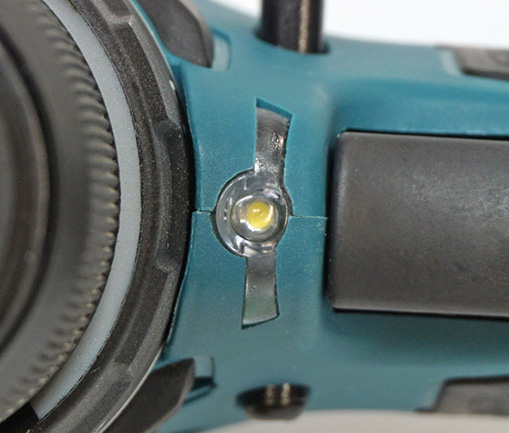 Makita mentions that the XTD06 has “dual L.E.D. lights with afterglow.” I’m only seeing one LED. Even looking at the product explosion (PDF), the LED module looks like it only has one LED. 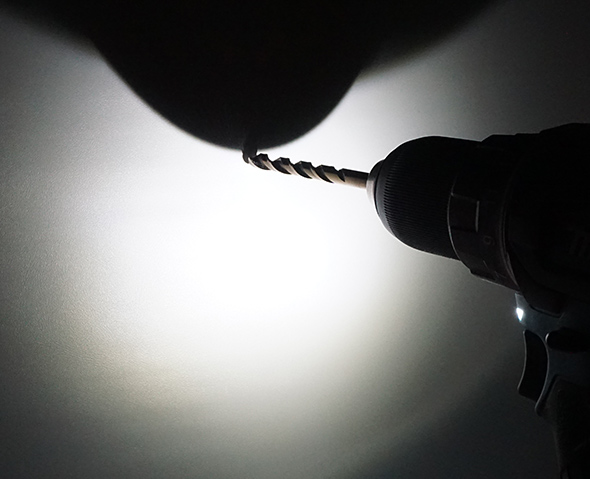 I think what’s more important though is the placement of the LED. Notice how the LED is placed right below the chuck. With this placement the chuck casts a shadow over the area you are trying to illuminate. 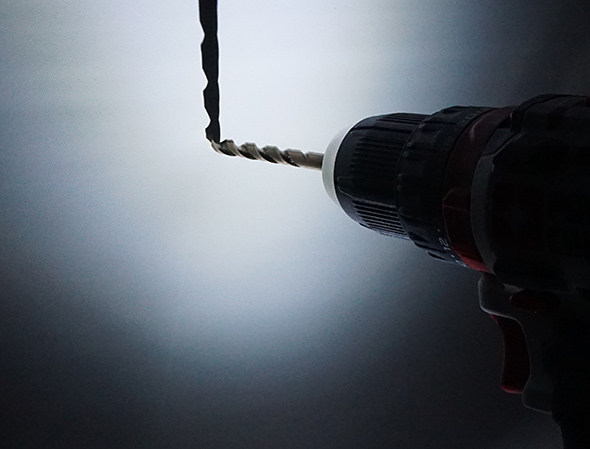 It’s taken some getting used to, but I have found that I prefer the illumination to come from the base of the tool, as found on Dewalt and Porter Cable’s newer cordless drills. 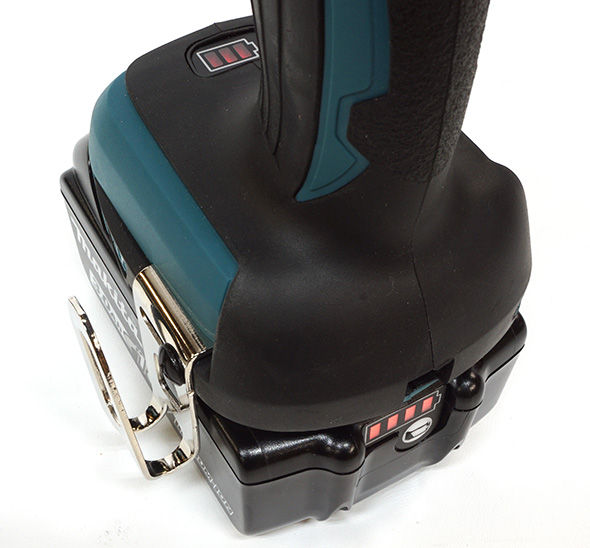 One thing I found puzzling is the on board battery charge indicator. It only has 3 LEDs whereas the battery meter on the pack itself has 4 bars.

After looking at the manual I discovered that the on-board batter meter reads about the same as the pack meter if you’d remove the fourth LED. I put together a table to make it easier to understand.

The clutch has 16 different settings, and when you are in low gear you have quite a bit of fine control with the trigger — enough where I was pretty confident using the drill to drive these finer screws once I had the clutch dialed in. 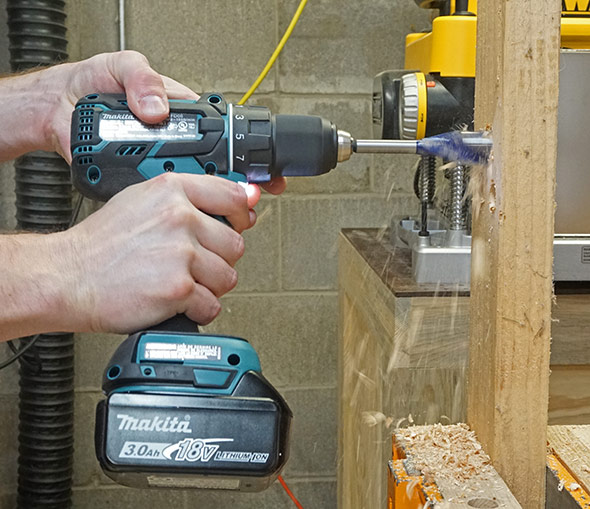 After thinking about it for a while I switched to a 2×4 and I was able drill straight through it with the 1″ SpeedBor bit. I’m thinking that with a 4×4 there is just too much material pressing on the bit and slowing it down once you get to a certain depth. At that point the drill doesn’t have enough torque to overcome it and keep advancing the cutters at the self-feed rate. With a 2×4 though, you’re through the board before it’s an issue.

Above I’m drilling though a 2×4 in high gear with a 1-1/2″ spade bit. Since the bit isn’t trying to pull through the wood like the self-feeding bits, it doesn’t require as much torque. Sure you could stall the drill if you pressed hard enough.

All the drilling I’ve shown was in high gear, in low gear you’ll have no problem doing any of these tasks and more, it’ll just be slower. So if all you are doing is drilling through single studs, you don’t have to worry about not having enough torque, but if you need to drill though double studs or more, you either need to switch to a non-self feeding bit or shift down into low gear.

What would a drill test be without some pocket holes? Above I’m drilling a pocket hole in red oak at high speed. To be honest, I’ve found this can be more taxing on a drill than you’d really expect. The Makita XFD06 didn’t balk.

One thing I didn’t try was drilling in metal. I know there’s some concern that the top speed of 1550 RPM might be too slow for a drill in this class.

All in all I think this is a solid kit for $99, probably even at $129. You get a drill that may not be a pro-grade powerhouse, but that still has enough torque to handle quite a few tasks. With the 3Ah 10-cell battery and standard Makita charger, this kit is a good gateway to get your Makita collection started.

While it isn’t the best tool I’ve felt in my hands, it’s comfortable and well balanced with some well thought out features. There are really only a few things I found questionable, like the 3 bar battery meter on the tool and low top RPM.

Finally, it’s a small point , but I love the fact that Makita provides a parts explosion for this drill right on the webpage for this kit. Many companies don’t bother releasing this information to the public anymore or at least making it hard to find, and I think it’s a shame. I can’t count how many tools I’ve fixed by going to a parts explosion diagram, finding the right part and ordering it online.

The price for this kit jumped back up to $129 at Amazon — the price pretty much everybody else is selling it for. We expect the price to drop to $99 again during the holiday shopping season.

Stuart’s Note: While I at first thought it a little sneaky that Makita bundled this kit with a “slow” charger, I then remembered that this is a brushless drill/driver, and that the brushless motor should contribute to longer runtimes. If a user starts here and expands their Makita tool collection, or if they are expanding their current investment with this kit, they’re going to have another charger at some point. It seems better for the compromise to be in the charger and not in the tool or battery pack.

That said, I do see one compromise with the tool – the lower RPM motor and gearbox. The drill is rated at 530 in-lbs. I would assume that Makita was faced with reduced max torque or max RPM, and they went with keeping the RPM on-par with their other mid-range cordless drills. Do you think this was the right decision?