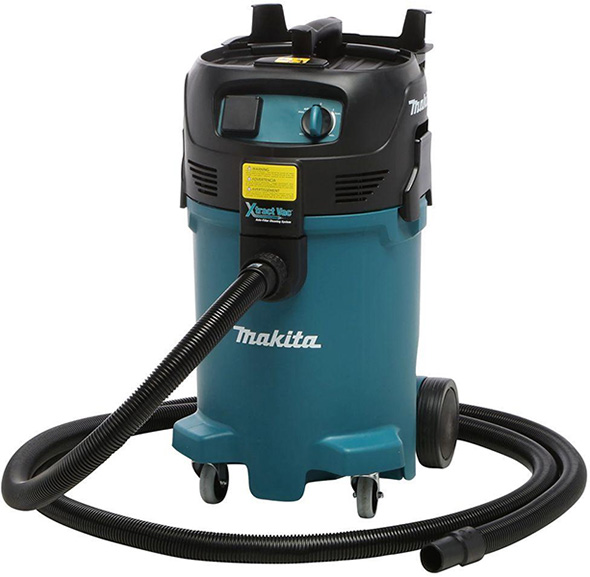 They sent it along with several new concrete grinding accessories, more on that below. I haven’t had a chance for much concrete cutting or grinding (although I do have a project coming up in the spring), but a drilling and cleanup task came up recently.

We were having some work done, and some of the tasks involved drilling into the concrete floor. One of the holes needed to be 3″ thick to accommodate some piping.

The contractor, for lack of a better title, had a Ridgid wet/dry vac. We talked a little about it, and it turns out they go through Ridgid vacs very often. I thought it was a good time to put this vac to the test.

The vac was set up quickly, although we made a poor choice of which included bag to use. The contractor opted for the plastic-walled disposable bag, but that left the filter open to dust accumulation. The filter bag would have likely been the better choice. The instructions weren’t very clear about which bag to use and when.

The manual also mentioned ventilation holes, but there weren’t any that we could see. The disposable bag, as far as I could tell, was simply a drum liner.

The filter bags, which seem to be P-78293, aren’t that much more expensive, are likely better for any task that involves fine particulate collection.

Judging from what we saw, the disposable bag was not the best choice for the work that was being done.

One of the criticisms from the contractor was about how the vac, and many like it, was bundled with a small diameter hose. I can understand why – smaller hoses work better for collecting dust created during tool use – but he needs a 1-stop dust extractor and cleanup vac.

Chunkier debris can get caught up in hoses, blocking airflow and reducing efficiency.

Aside from our using the completely wrong bag for the task, there’s a lot of good things to say about the vac so far.

Part of my limited time with the vac was hands-on, and part of it was observational.

First, it’s QUIET! Sorry, it’s quiet. It seemed to be a lot quieter than other vacs I’ve used in the past.

The wheels were excellent. The contractor’s current Ridgid vac doesn’t have wheels on it at the moment. Why? Because they suck so bad that he doesn’t even bother wit them anymore. The Makita has 2 large wheels at the rear, and 2 smaller swivel casters at the front.

It’s quite easy to maneuver as well. While I was testing it a little before the contractor was ready for it, I noted that it doesn’t seem like it’ll tip over if you pull the hose. You of course shouldn’t be doing that, but I was checking for stability. This is a very tall vacuum, and so that’s something I was curious about.

It seemed plenty powerful, rated at 135 CFM of suction power and 92 inches of water lift.

The tank opening latches are very large and easy to toggle, there’s on-board cord storage, a flat top, accessory storage, and what looks to be good enough hose storage.

Controls are easy, with variable suction manual and automatic modes. The auto mode is activated via a connected tool. Since the contractor was using a higher powered rotary hammer, he opted to keep the tool and vac on different circuits.

“Do you want to take it with you for some extended testing?”

A HEPA filter is optional.

I passed it along for added testing because it’ll be quite some time before I can clear enough of my schedule for comparative testing. I figured it’ll be good to see it get some field use.

From what I saw so far, especially with it being more stable and less noisy than expected, the Makita VC4710 Xtract vac wowed me a little bit.

Is it the best vac on the market? I can’t say, even if I had tested every vac side by side. It definitely does have a lot going for it, though. I find its tall form factor to be unusual, but not unwelcome.

It needs to see more use, in the field as well as in simulated testing, before I can wholeheartedly recommend it. But I can say this – one session was enough to dismantle any hesitations I would have in buying one.

Home Depot and Makita also sent along the following:

I have never used a 7-inch angle grinder on a personal project before, but understand that this is what you want when you have larger and heavier duty things to cut, grind, or smooth. 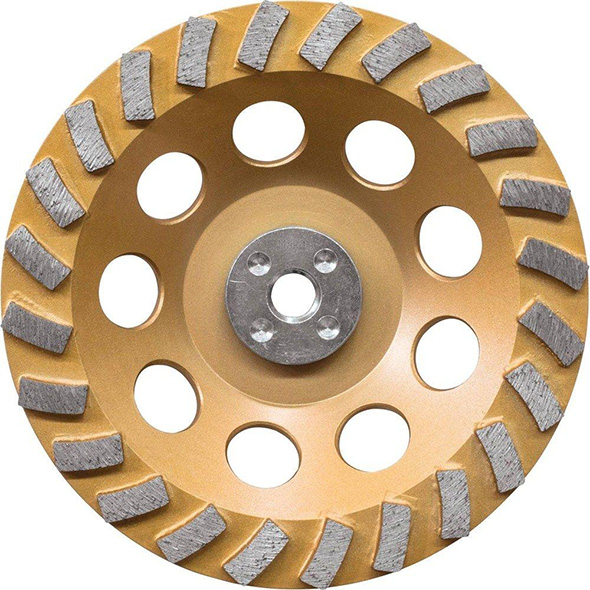 The grinder was accompanied with a Makita A-96425 diamond cup wheel, a low-vibration concrete-prep accessory that’s also said to be used for paint and adhesive material (presumably on concrete). This is also something I’m not at all experienced with, but I can at least say that the wheel appears to be well-made.

Here’s what the introductory email said about it:

The Makita 7″ Low-Vibration Diamond Cup Wheel (A-96425) features a 24-segment turbo rim design and is engineered for improved performance and less vibration. It is an ideal accessory for use with 7″ angle grinders with an electronic controller, and is built for paint and adhesive removal as well as concrete surface preparation. The innovative design produces fast material removal and a smooth finish, and is engineered to reduce “chatter” for improved operator comfort. 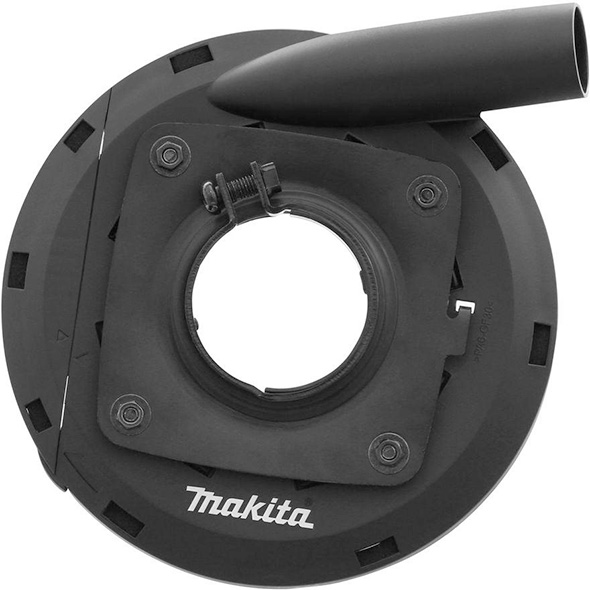 Finally, there’s the 195386-6 grinder dust shroud, which when paired with the vac, grinder, and connection accessory, is said to create an OSHA silica rules-compliant surface prep combination.

(They provided “objective test data”, showing that under the test conditions, the combination produced a time-weighted average respirable silica dust exposure of 100 µg.m^3, equivalent to 12.5 µg/m^3 throughout an 8-hr work shift.)

7″ angle grinders and concrete refinishing and surface prep tools are well outside my wheelhouse. Maybe we’ll do a giveaway soon, to put these tools into more capable hands.

But the vac? I’m finding myself now wishing I didn’t send it off for field testing, as I might not see it again. I really don’t think that further personal testing will turn up any major failings, it just seems like a really smooth vac, for lack of a better description.

Well, except for the bag situation, but that’s a one-time mistake. My instinct told me to go for the filter bag, but I figured that I’d go with the flow.

It’ll be some time before I hear back about how the vac is holding up, but I am expecting to hear good news.

Over at Home Depot’s site, one review for the grinder complaints about the dust creation, saying: it can create so much dust that you’re overwhelmed with the cleanup.

Thank you to Home Depot for providing the test samples!

Reader Disclosure: We’re in a paid partnership with Home Depot this quarter (and for one more). They sent over a selection of tools for testing and review consideration. There’s also a sponsored component (projects, giveaways) in the mix.