ToolGuyd > Power Tools > Cordless > Makita’s New Adapter Lets You Power 36V Cordless Tools with 18V Battery Packs
If you buy something through our links, ToolGuyd might earn an affiliate commission. 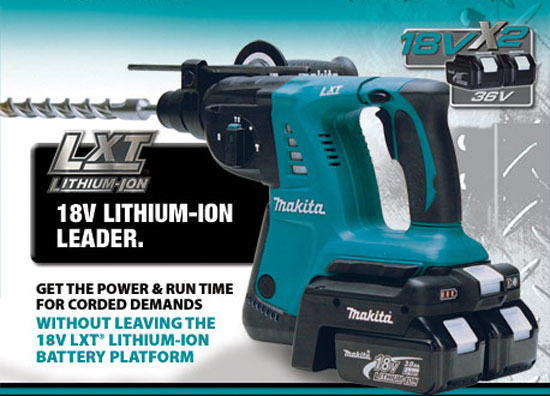 Higher-voltage 36V cordless power tools, especially rotary hammers, are much better suited for extreme-heavy-duty applications than even the best 18V models, but juggling multiple battery platforms can be a hassle not to mention costly. Makita’s engineers have come up with a very clever solution that allows users to power 36V tools using 18V battery packs.*

Full details have not yet been announced, but it looks like Makita is bringing to market a simple 36V battery pack adapter that accepts two LXT high-capacity lithium-ion 18V battery packs. Pop in your 18V packs, attach the 18VX2 adapter to your 36V tool, and you’re good to go.

The resulting solution looks large and bulky, but it allows Makita 18V users to put 36V tools to work without the need for separate 36V battery packs and chargers. There’s no word as to how much the adapter will cost or when it will be available. It’s also a moot point unless Makita makes their 36V rotary hammers available as bare-tools instead of kits.

*Technically the idea of an 18V to 36V adapter cannot be credited to Makita. Reader KenZ discussed such a concept about three years ago in a comment when describing how he hacked together an adapter to use two Makita batteries to power his 36V Bosch tools.