ToolGuyd > Hand Tools > EDC, Pocket, & Multitools > 5 Reasons to Buy Medical-Style Shears
If you buy something through our links, ToolGuyd might earn an affiliate commission. 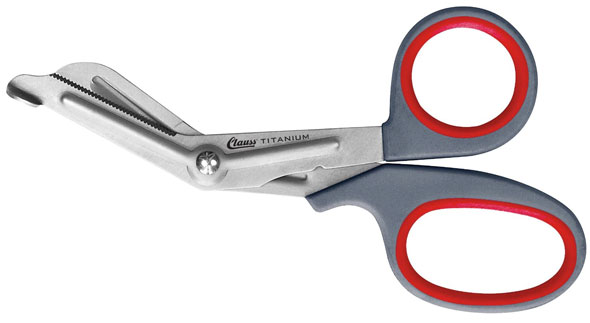 Medical-style offset shears are pretty inexpensive at $3-$10 each, but are packed with immense versatility. They are commonly called trauma shears, medical shears, EMT shears, and similar.

These shears have several distinguishing design features. First, they have offset blades, which allow for easier cutting of larger materials. Next, the have serrated or partially serrated blades that make them great for cutting tougher materials, such as fabric. Lastly, they have blunted safety tips that make them safer for use on things like clothing or bandages that are close to skin.

These are called trauma shears because EMTs and medical professionals use them to quickly remove clothing from a person before they administer first aid.

OR, you can use them to cut the Onesie bodysuit off your newborn after his diaper explodes in the car seat when he’s 5 days old and too young to bathe, instead of trying to cleanly pull a soiled outfit over his head. Yes, that really happened. The situation was so bad we had to cut his clothes off.

There are dedicated clamshell packaging cutting tools, but these types of scissors work great for making straight cuts in single and double-layer plastic.

Certain styles come with special coatings that make them great for cutting sticky tapes, such as medical tape. They’re also great for cutting gauze and wrappings, but make sure they’re clean and sterile before doing so.

4. Cutting Strapping in a Pinch

If you’ve heard of medical shears before, you have probably seen a video or two where they’re used to cut through pennies. Some shears can also cut through thin metal strapping, but that’s not something they should be used to do often.

The serrations that make these shears great for grabbing and cutting through clothes make them great for cutting other tough-to-cut materials, such as paracord or other small cord, webbing, and tougher fabrics such as canvas.

There are plenty of brands that make these, and there are two general sizes – ~5-1/2″ and ~7-1/2″. Some have different coatings, others have different hand grip materials.

Expect to pay about $3 to $10, depending on brand and quality. If you’ve got deep pockets, the Leatherman Raptor is a well-regarded fold-up multi-tool model with added features.

The one I own is a Prestige 7-1/2″ model made from 410 stainless steel with a black fluoride non-stick coating. It’s priced at ~$8 via Amazon, which is what I paid for mine. Cheaper shears should work about as well, but I liked the Prestige’s coating.

Sources for Flashlight and EDC Tool Reviews and Recommendations