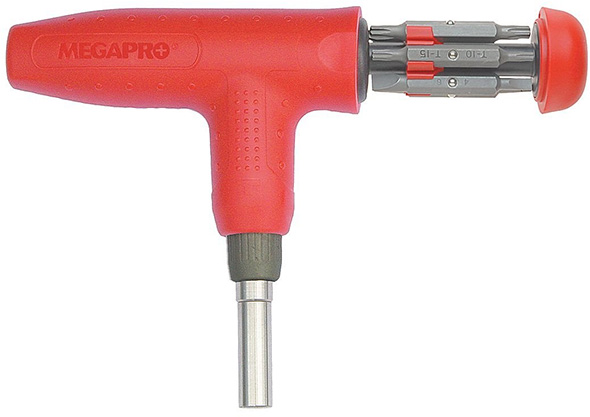 One of my first reviews on ToolGuyd was of a Megapro 15-in-1 hex bit screwdriver. Fast forward a few years, and I reviewed Channellock’s ratcheting screwdriver, made by Megapro. Megapro makes some good stuff.

I have been meaning to try their 1″ insert screwdriver bit ratcheting screwdriver, but it’s been low on my to-do list. Why? Because I am already convinced that I’ll like it. It’s similar to the Channellock-branded one that I reviewed, but with a 1/4″ hex bit holder that works with standard-sized bits, and not just Megapro’s double ended ball detent ones.

Not that the ball detent bits are bad, but I sometimes like a little flexibility. The last time I checked, Megapro’s bits were fairly easy to find, and some 3rd party bits might also be compatible.

Anyways, I recently learned that Megapro has come out with a new 13-in-1 T-handle ratcheting screwdriver. It features a gearless ratcheting mechanism, and is said to have been tested to over 354 in-lbs of torque.

In other words, it has a 0° “swing arc,” or pretty darned close, thanks to the gearless ratcheting mechanism, and is plenty strong.

It comes with 6 double ended bits. 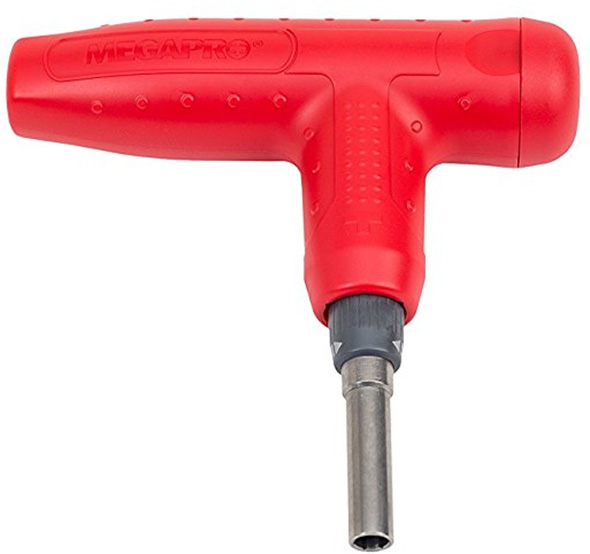 The Amazon listing says that it’s made in Canada, which seems to be true of other Megapro’s screwdrivers as well.

The new T-handle screwdriver, model 211R2T36RD, is said to be manufactured for serious industrial use.

I’m calling this a new product as I’ve never seen it before, on Megapro’s website or elsewhere, but the listing says it was first available back in 2015. There’s only one review, dated in July 2017, so maybe it was listed early but launched recently.

I tend to be very picky when it comes to multi-bit screwdrivers, ratcheting screwdrivers, and T-handle screwdrivers. If I didn’t already have too many screwdrivers that I wasn’t actively using, I’d buy this one in a heartbeat.

I like the ratcheting mechanism that Megapro built into their regular style of ratcheting screwdrivers, and so I’m fairly optimistic that they got the gearless mechanism right on this one. If you’ve tried it, what do you think?